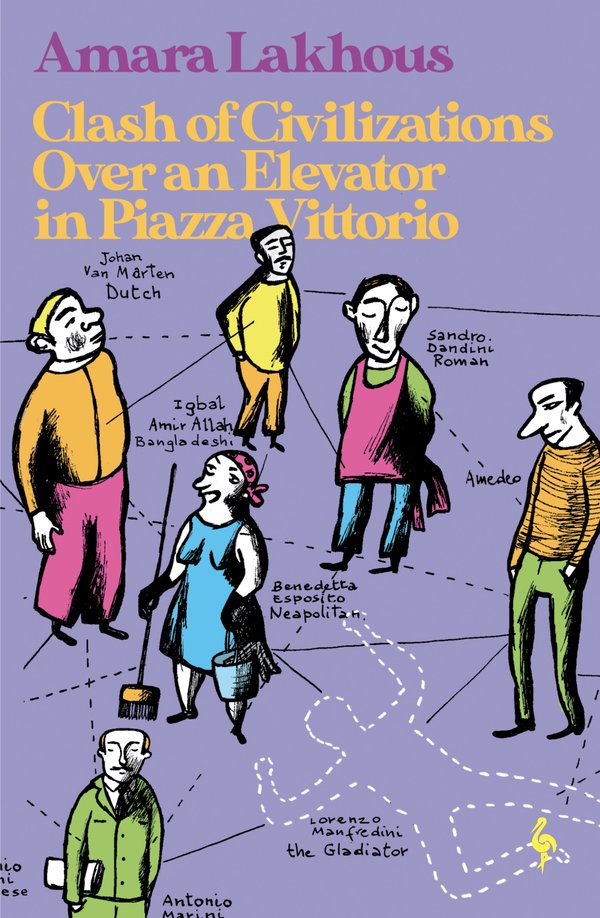 #RivetingReviews: Fiona Graham reviews CLASH OF CIVILISATIONS OVER AN ELEVATOR IN PIAZZA VITTORIO by Amara Lakhous

This lively polyphonic novella is not so much the ‘whodunit’ the blurb suggests as a ‘who is he?’ and a ‘where is he?’. Who and where is Amedeo, the friendly but mysterious man ‘from the south of the south’ who goes missing from his apartment block in Rome just when the corpse of a delinquent tenant, nicknamed ‘the Gladiator’, is discovered in the lift? Ten other local residents, unreliable witnesses all, give their overlapping and conflicting versions of ‘the truth’ before an equally unreliable police detective reaches two contradictory conclusions about the murder.

The titular ‘clash of civilisations’ is, among other things, an ironic nod to Samuel Huntington’s geopolitical theory of confrontations between world cultures, which he predicted would follow the end of the ideological divide between communism and capitalism. But if the non-Italian reader expects the main cultural clash to be between Catholic Italians and Muslim migrants, they are in for a surprise. True, nearly all the Italian characters exhibit gross ignorance and prejudice against foreigners, particularly non-Europeans and Muslims. And some of the incomers are baffled by Italian mores and customs – like Iranian Parviz, disgusted by the sight of a girl eating a pizza ‘as big as an umbrella’ on the metro. But one of the biggest cultural conflicts is among Italians themselves: between the self-styled diligent northerner, Professor Marini, and the more laid-back denizens of Rome, for instance, or between the petit-bourgeois Roman widow, Elisabetta, and the folksy Neapolitan concierge, Benedetta. Indeed, Professor Marini goes as far as to question whether Italy should ever have been unified.

The building’s lift is the epicentre of conflict. Lorenzo, ‘the Gladiator’, vandalises it. Elisabetta’s spoilt dog, Valentino, piddles in it. Benedetta vainly tries to keep it clean, the hapless Peruvian maid, Maria Cristina, is debarred from entering on grounds of obesity, and snooty Professor Marini demands that Bangladeshi grocer Iqbal show ID before letting him use it for his deliveries. The lift is almost a microcosm of contemporary Italian society, with the more privileged residents seeking to monopolise what Professor Marini reveres as the benefits of ‘civilisation’ for their own selfish ends, while the have-nots struggle to gain access, and the anti-social trash public property.

All this casts light on the other sense of ‘civilisation’. While the title primarily suggests contrasting cultures, ‘civilisation’ also refers to positive human qualities like those Amedeo displays: he helps his needier neighbours in their battles with the authorities, protects the weak, and at the same time amazes those around him with his knowledge of literature, history and philosophy, and his cultivated use of the Italian language. Indeed, the enigmatic Amedeo appears to be the most civilised person in the whole cast of characters.

This satirical portrait of multicultural Italian society is an entertaining read with an underlying tension that makes it a real page-turner. Clash of Civilisations holds up a mirror both to Italy and to other Western societies with significant foreign-born populations. It is as timely now as when it first appeared.

CLASH OF CIVILISATIONS OVER AN ELEVATOR IN PIAZZA VITTORIO

Fiona Graham is a literary translator working from Swedish, Dutch, German, and other languages. She is currently translating Elin Anna Labba’s August Prize-winning poetic history Sirdolaččat: The Deportation of the Northern Sámi (provisional title). She writes for #RivetingReviews and was reviews editor at the Swedish Book Review.

Read Fiona Graham’s #‎RivetingReview of WILL by Jeroen Olyslaegers