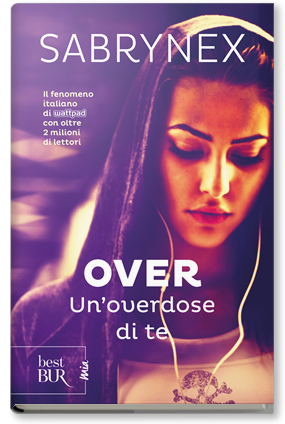 An Italian writer of Nigerian origins, Sabrina Efionay made herself known with the nickname Sabrynex at the tender age of fourteen, writing her first novel in instalments on Wattpad, one of the largest online communities of writers and readers.

In just a few months, Over: An Overdose of You won over millions of teenagers, and attracted the interest of Rizzoli, who published the novel in January 2016, and its sequel, Over2: We Walk in the Wind, in the summer of the same year.

Strongly characterised as a young-adult series, due to its themes, style and graphics, Over takes its cue from the dynamics of soap operas, with elements of a modern fairy tale, telling the passionate and tormented love story of Cher and Hunter.

‘I’m Cher, I’m eighteen and I think we all need something to depend on, to go crazy for. I didn’t know it until a few months ago, when I met Hunter. We are the opposite: black and white, good and evil, we cannot exist without each other. He bears the same scars on his skin, the same past, we support each other, but Hunter hurts anyone who comes near him, and he did it to me too. It’s my fault, I know: I lost my mind to a boy who lost himself.’

The writing shows surprising maturity and craftsmanship, considering the author’s age. Full of suspense, the story unravels through car races, fighting, drugs, sex and alcohol, and has a quite unexpected ending. Though it’s set in the suburbs of London, the location might just as easily have been inspired by Scampia in Naples or Castel Volturno (the setting of the film Gommorah by Matteo Garrone), where Sabrina was born and lives.

Narrated from a fresh point of view – that of Sabrina’s generation – the novel exposes all the fragilities of her cohort: the first to grow up on social media, always under the pressure to perform, constantly in the spotlight and often exposed to risks and addictions.

There are no bad kids, as such, in the novel, just bad choices; and even if at first the two protagonists might seem quite predictable, they never are.

Now twenty-one, Sabrina is apparently working on a novel about her eighteen-year-old mother’s journey from Nigeria to Italy: a personal subject and, no doubt, a book to look forward to.

Barbara Ricci is Italian and lives in Bristol, where she is a translator and interpreter. She has worked as an audiovisual translator and editor for TV, cinema and international film festivals (Venice, Cannes and Locarno), and as a translator of mainly non-fiction and children’s literature.