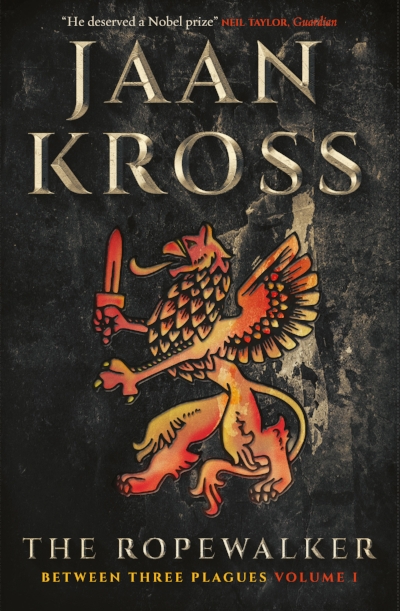 The year is 1578, the place Tallin, Livonia. The all-German town council has gathered to discuss beer tariffs, drains – and whether to authorise sales of the Chronicle of the Province of Livonia, the work of an independent-minded Estonian pastor called Balthasar Russow. Herr Topff, the comically verbose scribe who has scrutinised the Chronicle, wavers indecisively under his superiors’ cross-examination. Does the Chronicle show suitable respect towards the cream of Livonian society, the German nobility and bourgeoisie?

Solemnly, Herr Topff identifies three shortcomings: the chronicler has not applied the words ‘Anti-Christ’, ‘cannibal’ or ‘sodomite’ to Livonia’s archenemy; he shows excessive sympathy for his downtrodden fellow countrymen, the Estonian peasants; and – the horror! – he has failed to dedicate his magnum opus to Tallinn town council. Despite this slight, the councilmen – none of them great readers – are averse to appraising the book themselves. And so they nod this critical history of Livonia through.

The resemblance between the bumbling deliberations of Tallinn’s sixteenth-century councillors, satirised in A Book of Falsehoods, and those of Soviet censors, was fully intentional. In the 1970s, when Jaan Kross wrote his epic work, Estonia had been part of the Soviet Union for more than quarter of a century; and Glasnost was not even a twinkle in the eye of Mikhail Gorbachev, who was still a functionary in the Caucasus. Kross had suffered both Nazi and Soviet oppression, and spent six years in a Siberian gulag. Even after returning to his beloved Tallinn, he found himself unable to publish his poetry freely. The historical novel suggested itself as an alternative creative channel and a way of evading the censors. This strategy proved successful; part of the German translation of the novel, published in East Germany in 1986, was itself translated from Russian, and the parallels between the travails of sixteenth-century Livonia and oppression in the Eastern Bloc seem to have escaped both Soviet and East German censors.

Perhaps this was in part because Between Three Plagues tells the story of a real historical figure, Balthasar Russow; indeed, nearly all its characters are attested, some in detail, others as historical footnotes. Kross abided meticulously by the sparse-known facts, which afforded him ‘the right amount of concrete information and the right amount of space for the imagination to spread its wings’. The Chronicle itself gave him plenty of clues about his protagonist. Crucially, it was a historian’s contention that Russow’s origins were Estonian (not German) that prompted Kross to write about him.

Between Three Plagues – a monumental work, brought to the Anglosphere in Merike Lepasaar Beecher’s admirable translation – is both the story of Balthasar Russow’s life, from his schoolboy years to his death in 1600, and a vast historical fresco. The title refers to three outbreaks of the Black Death in Tallinn, and, metaphorically, to the foreign powers that fought over the troubled province of Livonia – Russia, Poland-Lithuania and Sweden – during the twenty-five devastating years of the Livonian Wars. The reader is tempted to ask: ‘Why only three plagues?’ There seem to be more: Denmark, too, is vying for control of Livonia; and for the suffering Estonian peasantry, the German manor lords are hardly less of a plague than marauding Tatars or Polish mercenaries.

Balthasar Russow gradually makes his way up through the society of this turbulent world from his humble beginnings as a rural wagoner’s son. The first volume, The Ropewalker, opens with the astounding feats of two Italian tightrope-walkers high above Tallinn, which inspire young ‘Bal’ and will remain with him to the end of his days. As one of the few Estonians in Tallinn’s Latin school, he too has to manage a delicate balancing act, combining his home life in a fishing village with an elite education among the sons of Tallinn’s German burghers. And visiting his uncle’s family in the village of Kurgla, he is confronted with the unremittingly harsh lot of the peasants. Epp, his first love, comes to symbolise a lifelong bond with the people who work the land. Later in the novel, the young man is drawn into political intrigues in Tallinn and Finland through the Machiavellian Doctor Friesner, and is bewitched by his beautiful, tragic wife, Katharina. The contrast between the two worlds could hardly be greater.

As a student in German Stettin, Balthasar continues to move up in the world, pursuing his studies in theology and classical languages. Yet he remains the odd man out – the only Estonian from a peasant background among his German and Slavic fellow scholars. And on a chance visit to Livonia, he is forced to take sides in the peasant uprising of the late 1560s, fighting alongside the elected peasant ‘king’ and his men in their ill-fated attempt to seize the land held by their overlords.

On returning from further studies in Wittenberg and Bremen, Balthasar becomes the pastor of an Estonian congregation in Tallinn and determines to write a chronicle of events in Livonia, ‘this wretched land where nothing was remembered’. In A People without a Past, he seeks to record the truth, and to give the people of Livonia a historical memory and thereby an identity. It is an endeavour that again brings him into conflict with the powerful, not least other Germanised Estonians who, unlike Balthasar, deny their links with the common people. Even Balthasar’s wife, Elsbeth, sees him as something of a country bumpkin, learned though he may be.

What makes Between Three Plagues such an extraordinary reading experience is Kross’s remarkable ability to conjure up a scene through sensory detail, be it the slow-burning mutual attraction of young Balthasar and Epp while they clear the land for planting, the harrowing execution of an elderly peasant in Tallinn, or Balthasar’s wintry sleigh ride across the frozen Gulf of Finland. Kross’s imagery is vivid, his language – superbly conveyed in Beecher’s translation – colourful and poetic. But most importantly, Kross strikes a poignant balance, portraying an often brutal late-medieval society and a man who is both very much of his time, yet also modern in his struggles with his conscience and religious faith. In this, Kross also shows himself to be a consummate ‘ropewalker’.

Fiona Graham is the translator of Karin Bojs’ prizewinning My European Family: the First 54,000 Years and 1947: When Now Begins, by Elisabeth Åsbrink. Her translation of Torill Kornfeldt’s The Re-Origin of Species is due to be published by Scribe in July 2018. She is Reviews Editor at the Swedish Book Review.