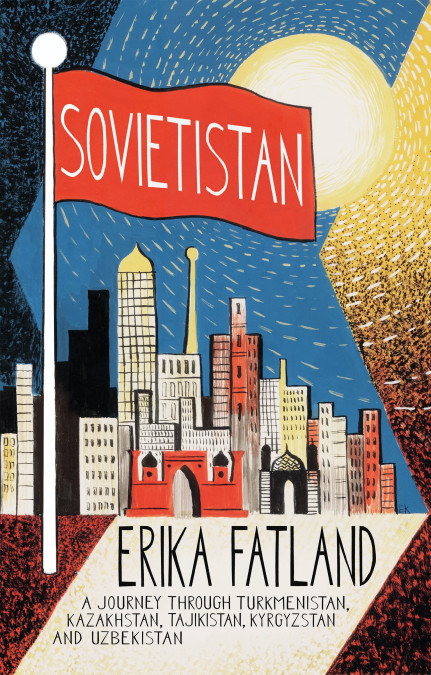 The five ‘stans’ portrayed by Erika Fatland – Turkmenistan, Kazakhstan, Tajikistan, Kyrgyzstan and Uzbekistan – are, it’s probably fair to say, scarcely more familiar to the average Westerner today than they were in Soviet times. Infuriating though it must be to Kazakhs, Sacha Baron Cohen’s infamous fictional Kazakh reporter, Borat, is more of a household name in the West than the country’s capital. (Nur-Sultan, since you ask, after former President Nursultan Nazarbayev.).

In the style of other intrepid Nordic journalists like fellow-Norwegian Åsne Seierstad (author of The Bookseller of Kabul), Fatland describes circumstances and events that are often surreal, grotesque and tragic, without losing her Scandinavian cool.

While the USSR undoubtedly brought some improvements to the Soviet republics of Central Asia, what is most apparent now, a good quarter-century after independence, is the environmental destruction wreaked by the communist regime. Fatland visits what remains of the Aral Sea – once the world’s fourth largest inland sea – now a ghost of its former self after decades of intensive cotton cultivation. In Mojnaq, Uzbekistan, boats lie rotting where once a thriving fishing industry supplied seven percent of the USSR’s fish. Large-scale irrigation depleted the sea and brought salt to the surface in the cotton-growing areas, with infertile soil as the long-term result. In a village near Semipalatinsk (now Semey, Kazakhstan), where the USSR held 456 nuclear test detonations, Fatland meets a doctor who tells her that half the villagers are ill. Children are born with anaemia or with six fingers. Yet people stay on.

Authoritarian regimes notwithstanding, Fatland encounters much warmth and hospitality among the peoples of Central Asia. In the isolated Yaghnob Valley in Tajikistan, she meets the descendants of the Sogdians, whose language, once spoken from Turkey to China, was the lingua franca of the Silk Road. Now the people live in rural poverty, but they enjoy lavish wedding celebrations, to which even outsiders like Fatland are invited. In rural Turkmenistan, a young peasant woman invites her in for tea and fermented camel’s milk. In a yurt in the Karakum Desert, nineteen-year-old Ogulnar, who has only been to the village school and has barely read a book, recites one of her many poems, a song in praise of the desert.

Fatland’s status as a foreign woman gives her a special viewpoint. On the one hand, many of the men she meets in these male-dominated societies treat her almost like an honorary man. They certainly don’t shy away from discussing topics such as how many wives it is reasonable to have in their version of Islam. On the other hand, Fatland is able to interview women about sensitive issues, such as the entrenched Kyrgyz practice of bride snatching. A number of women, some of them former university students, tell their sad stories of being abducted, sometimes by men they barely knew, and forced into marriage. Against this background, it is startling to read that Genghis Khan – of all people – once introduced a law banning the abduction of women.

Given the many injustices she describes, Fatland’s narrative style can come across as lacking in emotion. She tends to let the facts speak for themselves. But there are flashes of dry humour and some lyrical passages (in Kari Dickson’s translation), particularly in her descriptions of the ancient cities of Uzbekistan. This is a book that leaves one eager to read more about Central Asia, and more by Erika Fatland.