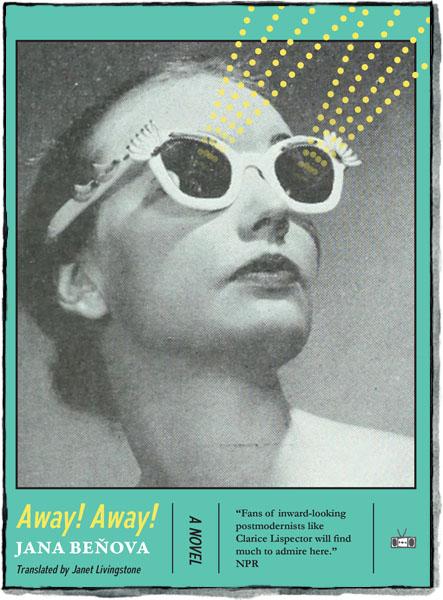 #RivetingReviews: Fiona Graham reviews AWAY! AWAY! by Jana Beňová

‘All that’s left is how to choose the most aesthetic suicide: marriage + 9 to 5 office job, or a revolver.’

Forty-year-old Rosa’s view of her life could hardly be bleaker. A girl from the wrong side of Bratislava’s tracks, she lives with a needy writer whose odd name, Son (also in English in the Slovak original), unsubtly signals his dependency on her. Neither her personal relationships nor her work bring fulfilment. In one of many interior monologues she confides:

‘I’m trapped. I want to lie in bed next to Son, but instead, I’m sitting at work, a cramp personified. A trapped, bare, blood-soaked winter bone.’

Since falling for the lure of Paris at sixteen (without actually visiting), Rosa has had a serious case of literary wanderlust. Even her descriptions of wintry Bratislava are imbued with the hüzün (‘melancholy’) of Orhan Pamuk’s Istanbul. She and Son have travelled widely, but he seems impervious to foreign influences. In a Berlin café, like the archetypal Englishman abroad, he speaks ‘slowly and clearly like a polite foreigner to a person who’s trying to learn the language. As if he thought everyone should understand Slovak if a person speaks clearly, loudly and emphatically.’ In Paris, the bounds of pre-1989 Czechoslovakia reassert themselves: ‘For years we’ve only talked amongst ourselves. Linguistic incest.’

Though Rosa escapes, she travels neither very far, or for very long at a time. A trip to Austria to see her lover, Corman, and travels in Slovenia with a marionettist called Pierre, are punctuated by mercy dashes back to Bratislava. Son’s attempted embraces trap her: ‘To carry? Mostly to be carried. But how can you carry a 100-kilo child through the world?’ And travel proves unrewarding. In Austria, geraniums blooming in window boxes remind Rosa of cancer, while church bells are ‘Catholic heavy metal’. Pierre compares making love with a woman to the routine of driving a car, and Corman leaves her.

While the themes of marital and extra-marital disappointment are familiar, Beňová’s narrative technique is not. This is no conventional novel with an easy-to-follow chronology and a cast of characters with plausible backstories. Rather, it is a collage comprising snippets of text, some in the author’s voice, others reflecting dialogue or interior monologues, many of which are unattributed. By eschewing quotation marks, Beňová keeps the reader guessing. Nor does the text fall into neat paragraphs. There are numerous fragments consisting of a phrase, or even just a couple of words. In places, the text is not so much stream-of-consciousness as spurt-of-consciousness.

This brief, disjointed but often vividly poetic work will appeal to those who like their crosswords cryptic and their literature cerebral. Janet Livingstone’s achievement in translating so complex a patchwork into the fabric of English is quite extraordinary. Like the austere woman in X-ray specs on the cover, the translator must see through the surface of the text to what lies underneath. Yet she must leave the reader the freedom to interpret Beňová’s work in her own way – or, perhaps, to comb through it like women examining their unsatisfactory relationships, described thus in Beňová’s characteristically sardonic style:

‘They probe their collective experiences – memories – like picking through hair for lice.