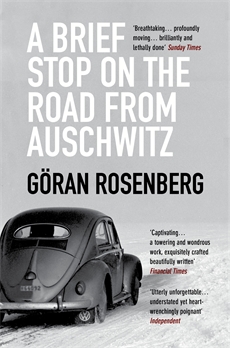 #RivetingReviews: Fiona Graham reviews A BRIEF STOP ON THE ROAD FROM AUSCHWITZ by Göran Rosenberg

One evening in August 1947, twenty-four-year-old David Rosenberg from Łódź alights in Södertälje, a small Swedish town with a big lorry factory. The sender’s address on his letters to fiancée Hala is R 639 B, as stark as a block number in a concentration camp. Passing trains screech and whine “like an overburdened chain gang on a punishment march”. Yet Södertälje – largely history-free – holds the promise of a new life for the young couple who once parted on the selection ramp at Auschwitz.

Göran Rosenberg’s multi-layered masterpiece is a memorial to the father he loved, and lost. It is also an exploration of David’s experiences as a death-camp inmate, slave labourer, refugee and emigré; an examination of how society treats traumatised refugees; and a poignant memoir of Rosenberg’s childhood.

The narrative shifts back and forth in time, capturing the simultaneity of past and present. The opening scenes in post-war Sweden are followed by a flashback to the Łódź ghetto, where all pretence of normality ceases when the SS order families to yield up their young children. Meanwhile, Södertälje’s local newspaper juxtaposes a piece on the  celebrations of the Catholic Saint Lucia with a report on the killing of Poland’s Jews. Like the Warsaw carousel that Czesław Miłosz immortalised, still turning while the ghetto empties, the everyday coexists with genocide.

The central chapter traces David’s odyssey from Łódź, via Auschwitz in Poland, to Germany and the slave-labour camp near Braunschweig, where he fitted lorry axles for Firma Büssing, on to Ravensbrück and the Wöbbelin death camp. Though the horror is beyond imagining, Rosenberg chronicles the atrocities meticulously, performing a duty of memory. The quiet, understated narrative style occasionally gives way to bitter irony, as when Firma Büssing’s proprietor rejects a post-war demand for compensation on the spurious grounds of having treated “his” slaves better than most. Sarah Death’s translation sensitively conveys these shifts in tone.

Beyond the horror, however, the book’s most remarkable achievement is its heart-piercing depiction of a young man’s struggle to make the transition from survival to life, moving from a Swedish “aliens’ camp” to the “Place” he attempts to “make his own”. “The Place”, “the Project”, “the Child”, “the Name” and “the Language” acquire universal significance. Göran is given the most common Swedish boy’s name to make sure he will fit in. But David, who hones his Swedish by reading Strindberg after shifts at the lorry factory, and designs a car luggage rack – the “Piccolo”, which has echoes of the Auschwitz “Pikolo” in Primo Levi’s masterpiece – nonetheless remains trapped in an assembly-line job that crushes his spirit. He will ultimately be enveloped by the shadows of the past.

Rosenberg berates his younger self, “the Child”, for failing to grasp that “he cannot make the Place his own if he doesn’t know where he comes from”. That is the very thing the book explores and it does this in such an intensely moving way that it adds to our understanding of the duty and art of being human.

A BRIEF STOP ON THE ROAD FROM AUSCHWITZ