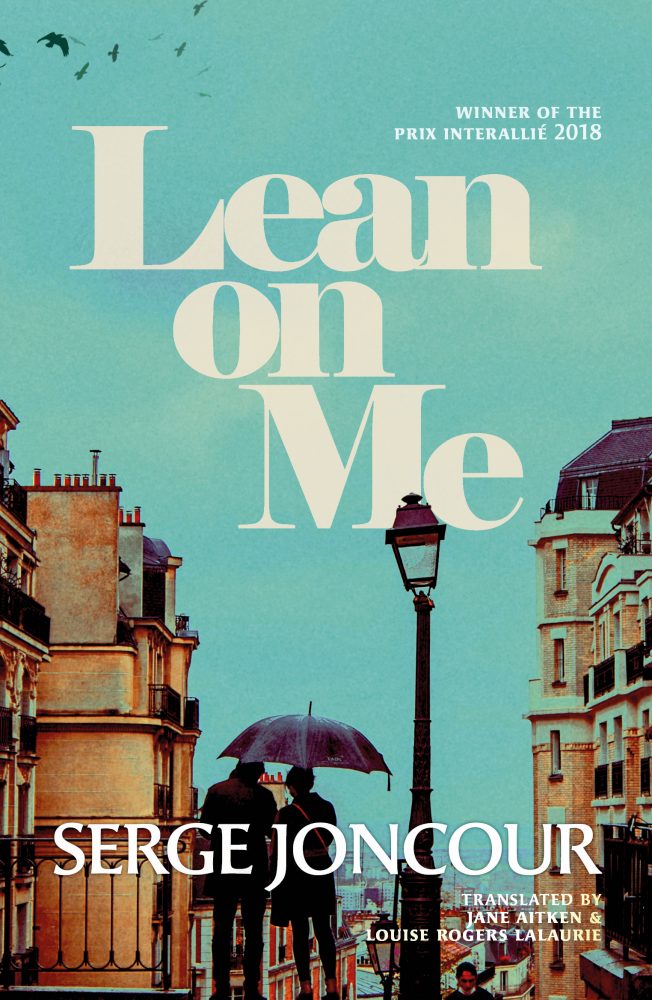 #RivetingReviews: Ewa Sherman reviews LEAN ON ME by Serge Joncour

Serge Joncour studied philosophy before he became a novelist and screenwriter, and while existential questions simmer just beneath the surface of events, his elegant, lyrical style takes the breath away. I was in awe of his previous novel, Wild Dog, and now with Lean on Me (2016), winner of the prestigious Prix Interallie, an annual French literary prize awarded to a novel written by a journalist, he has created another emotive world, full of power and tenderness. He steers the action with confidence, interspersing it with sharp observations about modern society and with delicate humour, but with empathy as the key.

In the centre of chic Paris he brings two lonely humans together to share intimate details about their lives. Aurore and Ludovic could not be more different as people and professionals. They live in different sections of an apartment block that in itself shows the two sides of a societal divide. The courtyard between the two sections – the stylish and the rundown – is the unexpected meeting point for two people whose paths might never otherwise cross.

These characters’ experiences provide vignettes of the French capital and the attitudes of those who live there. Aurore, stuck in an unhappy marriage to her successful American husband, faces losing her fashion business and feels that she is also failing as a mother. Ludovic has misgivings about the ethics of his job as a debt collector and still grieves the losses both of his wife and of his previous life as a farmer. These two unlikely partners are drawn together following an incident with a flock of crows in the courtyard. They are both desperately fragile and their sudden connection exposes deeply hidden emotions and a longing for intimacy and understanding.

Joncour focuses on subtly telling us that appearances are deceptive: Ludovic’s size and Aurore’s sophistication mask their vulnerability and desire for true intimacy: ‘If you look strong, you need to be strong.’ Ludovic ‘felt crushed by the city’, and the River Seine is his anchor, a reminder of nature and the physical work on the farm that he misses so much. Aurore ‘represented everything he loathed about Paris, everything he rejected, everything he should avoid, and yet he found himself attracted to her. To everything about her.’Aurore’s social status and easy knowledge of the city exacerbates Ludovic’s sense of exclusion, of not being worthy, not fitting in. His grief for his wife seems to increase as he reflects on his past losses. Aurore in turn fights her own desires and also begins to plan how to manage the unquestionable feeling of security he offers. Both are so shocked, surprised and overwhelmed by the sudden explosion of affection between them, the affair spills over into their careers, with potentially devastating consequences. Ludovic wants to protect Aurore from her dishonest business partners, and she allows him to become involved, leading to frustrations and anxieties. There is, however, in their complicated relationship, a sense of hope – represented by their continued ability to accept love.

Jane Aitken and Louise Rogers LaLaurie jointly translated Lean on Me, and prove masterful in their attention to the author’s detailed and nuanced writing. The sensitivity of the narrative comes alive and takes the reader on a journey of discovery through Paris, the famous location that becomes a character in its own right. Another literary gem from Joncour.