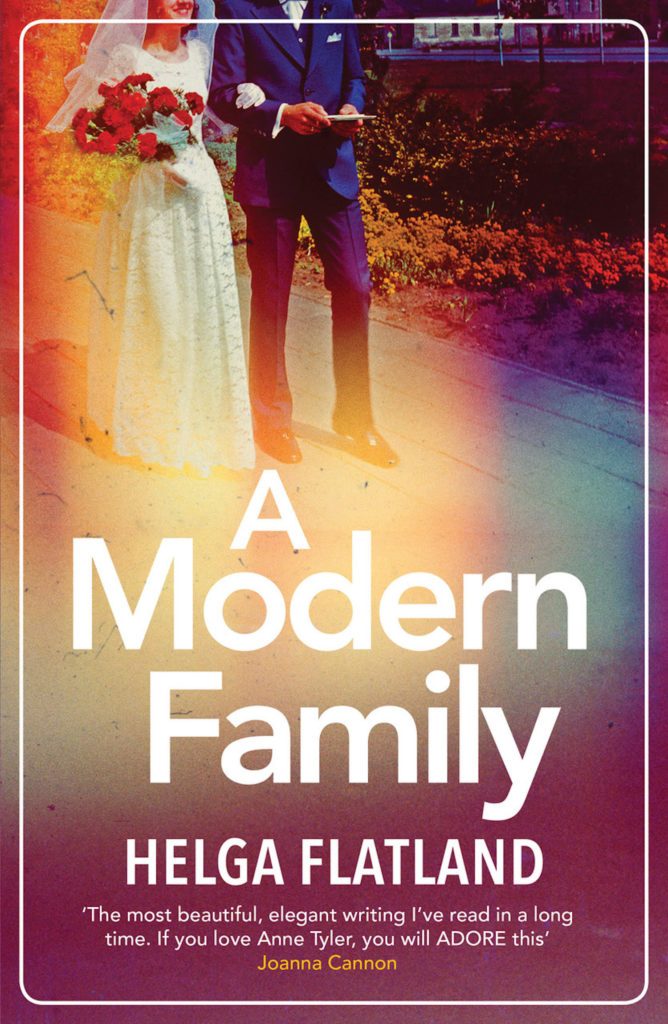 Thirty-year-old Håkon’s Italian holiday with his parents and siblings was meant to be a joyful occasion, bringing together those closest to him. The group of nine was set to have fun, while visiting Rome and then relaxing in a beautiful house by the coast. Yet a slightly unsettling atmosphere and the reluctant announcement during a celebratory dinner for his father’s seventieth birthday has turned Håkon’s world upside down. He again assumes the role of the youngest child in the family, letting his older sisters, Liv and Ellen, deal with the aftermath of the monumental and unexpected decision. The impact on his own beliefs becomes obvious only much later in the novel, and at the same time reinforces his perception of contemporary relationships, with uneasy consequences.

A Modern Family, told mostly through the alternating perspectives of Håkon’s sisters, analyses how adult children come to terms with their parents’ divorce. The author, Helga Flatland, focuses on the dynamics between three siblings shaken by the crumbling of the foundations on which their relationships are built.

The voices of the siblings’ parents, Sverre and Torill, are barely heard during the book, instead they provide a canvas on which others paint their own recollections and expectations. Married for forty years, they are now at a crossroads; they have grown apart and feel that there’s nothing left for them in their marriage. So their decision to lead separate lives seems reasonable. Yet forty-year-old Liv, and Ellen, who is two years younger, are shocked and disbelieving, at a loss as how to reconcile their childhood memories and the certainty of the past with this new reality. Even though they are two professional, independent women – respectively, a journalist and a communications advisor to politicians – they struggle to express their feelings, to comprehend how they can reframe their future, and to cope with their personal issues without the safety net of their parents’ approval.

It seems that both sisters’ existence and sense of their own value has depended on certainties, on the belief that nothing can or will change. Yet everything does: as always responsible Liv and Olof concentrate on their children, Agnar and Hedda, they discover psychological holes in their home life that threaten to damage their marriage. Meanwhile Ellen descends into hopeless emptiness as she tries and fails to conceive, and begins to reassess her relationship with her boyfriend, Simen.

Helga Flatland’s UK debut and winner of the 2017 Norwegian Bookseller’s Prize, A Modern Family offers a richness of emotions which deserves to be savoured, especially in the stunning, sensitive translation by Rosie Hedger. In elegant style, with each nuanced sentence resonating with the reader, Flatland presents a touching examination of family life experienced by people who realise how firmly they have been anchored in the history of their clan.

A Modern Family is poignant and subtle, sharp and delicately funny, blending typical Norwegian touches with features that are universal. There are the ordinary rituals, such as making waffles for special occasions and obligatory trips to cabins in the woods or in the mountains. Equally important are the getaways to catch the summer sun in the south of Europe, looking for Pokémon with the grandchildren, and the horror of dating later in life. And even though Håkon states ‘I don’t believe in monogamy, it goes against the laws of nature’, most importantly, this literary Nordic gem, full of emotions and psychological insights, is all about being loved.