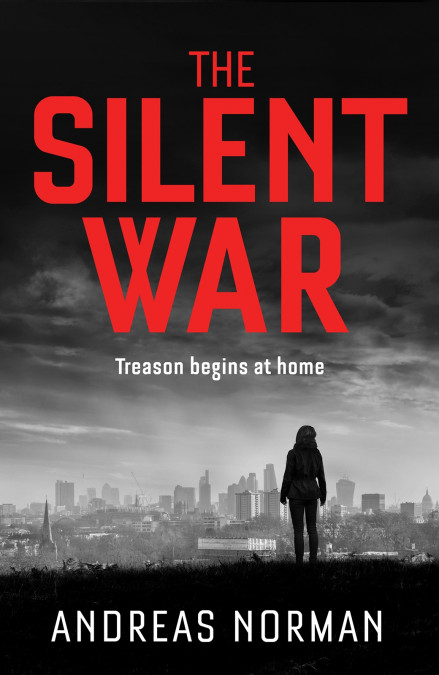 As a former diplomat and a member of the Swedish Ministry for Foreign Affairs, Andreas Norman knows a thing or two about counterterrorism, but he will divulge nothing that compromises his previous position. What he does reveal, however, colours and enhances that otherwise murky realm, alien to most ordinary people.

Officially Bente Jensen and Jonathan Green don’t exist in each other’s consciences. They are invisible. But in reality, their professional lives as spies posted in Brussels are inextricably linked. I have no idea how the investigators and undercover agents really operate in the secret domain of illusions, analyses and international agreements, but reading The Silent War makes their world superficially familiar, the moral dilemmas they face are authentic and could affect anyone. What keeps them going is a conviction that they support the greater good. Usually. Private sacrifices seem irrelevant when it comes to saving the world from the terrorism. Yet nothing is ever black and white; the varieties of grey permeate everything. And thus the Swedish Bente and the British Jonathan are pulled together to find a solution to a problem that wasn’t of their own making.

A conscience-stricken British analyst has given Bente a memory stick with damaging evidence of the existence of a house in Syria where so-called clients have been held, interrogated, and finally killed. This ‘safe’ house was anything but. While alive the prisoners were useful to a group of Brits, including Jonathan, who now fears that, should this operation be exposed, it will cause irreparable damage to MI6, his immediate boss and himself. Money can buy silence, and so can blackmail. But the British establishment doesn’t just want to shame and disgrace Bente, it also wants to exact revenge on Jonathan. Fighting for survival, the two spies consider joining forces, but betrayal has many faces, and big secrets and little lies grow to monumental proportions, destroying everyone in their path.

The author doesn’t spare us the personal failings of both protagonists, offering multi-faceted psychological portraits that make them human –sympathetic and vulnerable underneath their formal armour. We also see their families as they feel the impact of continuous surveillance and understand their part in the larger scheme of things.

Morally complex, this politically charged novel puts Sweden at the centre of international espionage. It made me think of the Norwegian TV series Nobel; while the dilemmas and methods here differ, both works focus on the tragic consequences of private and public decisions, and shatter the image of Scandinavian impartiality regarding Middle Eastern violence.

The excellent translation by Ian Giles, which catches both nuances and hard facts, plus the fast-paced narrative, which heads at breakneck speed towards a conclusion that will leave many reeling over the mind games those in power play, make The Secret War a truly modern spy thriller.