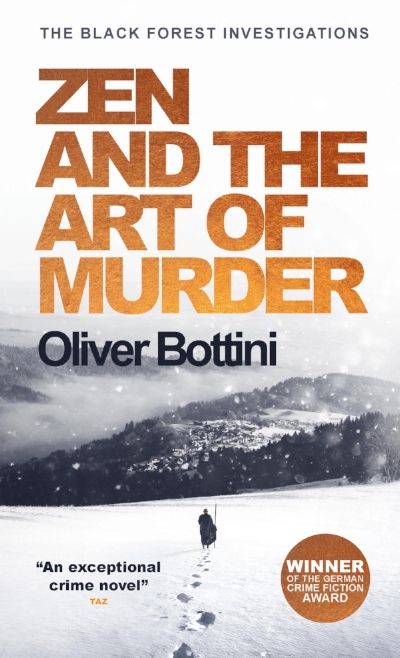 #RivetingReviews: Ewa Sherman reviews ZEN AND THE ART OF MURDER by Oliver Bottini

A very unusual sight alarms the inhabitants of Liebau, a small town near Freiburg in the Black Forest close to the French border. A strange, silent Japanese monk, dressed only in sandals and a cowl, wanders through the snowy fields and forests. The town’s Mayor insists that the police do something to prevent a potential sect – or whatever this is – from bothering the area. The local policeman, Hollerer, takes up the case, but it is Louise Boni, a maverick chief inspector with the Black Forest’s Serious Crime Squad, who is assigned to travel to the town of Liebau, although so far nothing has actually happened.

At first Boni is reluctant, but she uses this as an opportunity to escape her own troubles and her haunted memories of three men: Her brother had died in the snow, her husband had left her in the snow and she had killed a man in the snow. Trapped in a world of personal failure, her life punctuated by drink, loneliness and regret, she can’t help but become involved in the mystery of the young monk. He shows signs of having been beaten, as though he is fleeing some unknown evil, and though unwilling to talk, he allows her to trail him and they spend a night together – chastely, side by side in a cave. Eventually – with the help of Hollerer and Niksch, another policeman, as well as Landen, a translator specialising in Zen Buddhism, Louise learns the monk’s name. He’s called Taro Zensu and was a Zen scholar originally from Japan. But in spite of uncovering Taro’s secrets, the situation is far from resolved. Deaths follow as the monk is pursued by a group of sinister men.
Unfortunately, Louise Boni’s unorthodox working methods, combined with her personal issues (as well as the earlier trauma of killing a paedophile), lead her supervisors to take her off the case. She is forced to take sick leave and get psychiatric help – all of which is ofcourse ‘unhelpful’ in her eyes. So, in time-honoured crime novel, tough-cop fashion, and disregarding all formal procedures, Boni continues her own unofficial investigation, intrigued by the mystery and convinced that something terrifying is about to happen to her. She comes across a nearby Zen Buddhist centre, obviously connected to the case, and thereby uncovers a multitude of unpleasant secrets, such as a child-trafficking ring operating as an adoption unit supplying orphans from the Far East.

Zen and the Art of Murder, originally published in 2004, was made into a film and awarded the Deutscher Krimipreis, Germany’s most prestigious award for crime writing. Oliver Bottini’s two further books in the series, A Summer of Murder and In the Name of the Fathers, are also due to be published in English over the next two years, again translated by the excellent Jamie Bulloch. With its cinematic writing style, its brilliant sense of location and its strong visual depiction of an inhospitable landscape, Zen provides an intelligent and engrossing crossover novel between a police procedural and the study of an individual’s personal collapse, as Louise Boni struggles with her past and present demons. A few interesting male characters do appear and do influence her actions, but Zen is essentially the story of a woman in man’s world. A woman who is determined, passionate, flawed and infuriating, constantly on the edge of the abyss, and who leaves a lasting impact on all those she meets.

Zen and the Art of Murder

Translated from German by Jamie Bulloch

Ewa Sherman studied Polish Literature and Language, and law, and worked with the Polish media, including music monthly ‘Tylko Rock’ (Warsaw) and Polish Radio (Białystok). She’s translated several books of sonnets written by her mother Krystyna Konecka from Polish to English. She is passionate about Nordic and Scandinavian literature and culture, blogs about these subjects for Nordic Noir blog, and writes reviews for EuroCrime and Crime Review websites.