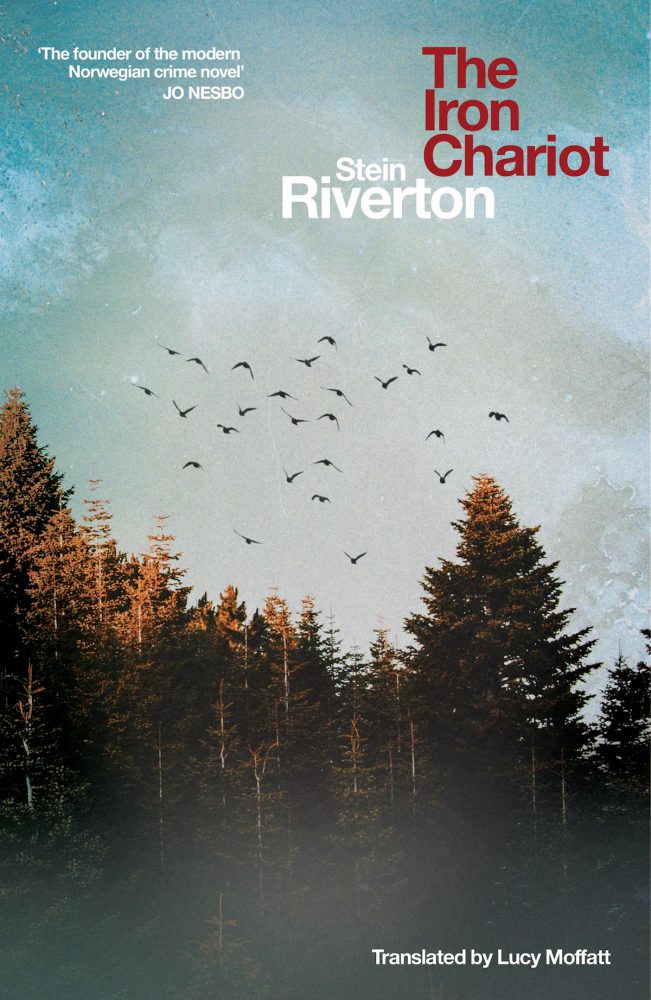 The Iron Chariot (‘Jernvognen’) by Stein Riverton was first published more than 110 years ago. and in 2017 was voted the greatest Norwegian crime novel of all time by Norway’s crime writers’ association. The same year Lucy Moffatt’s English translation appeared in ebook format. Now, thanks to the efforts of a publisher keen to introduce more forgotten or unknown literature to the English-speaking world, the paperback is released, and the book will hopefully reach a much wider audience .

This classic story is set on an idyllic holiday island where hotel guests enjoy long summer days under the midnight sun. It is told by an unnamed narrator, a young man extremely sensitive to the changes in the weather and in the social atmosphere. One evening he sets off on a long, promising walk to Gjærnæs Farm, run by siblings Carsten and Hilde. The visit is not as successful as he has hoped – he has no chance to speak with the young woman. Feeling despondent he heads back, when he hears a terrifying rattling of loose chains, and encounters a fellow hotel guest – a forestry inspector called Blinde. The next day he realises that he is the last person to have seen Blinde alive.

A detective, Asbjørn Krag, summoned from the capital, arrives, and a second victim is soon discovered. These two violent events, occurring in quick succession, shock all the holiday-makers, but do not surprise the locals. Most of them believe in the legend of the ghostly iron chariot that rambles aimlessly through the plains and along the rugged coast, announcing tragic deaths: ‘but nobody had seen it and it never left any tracks upon the road.’

The beauty of this slim volume lies in the intelligent and engaging tone, evocative of the best Golden Age writing, and in the exuberant, eccentric and enigmatic investigator, Krag, who insists on making a distinction between the ordinary, incompetent local police in the area, and himself: ‘The term ‘policeman’ implies that one is employed in the service of the state … I am entirely my own master and therefore call myself a private investigator.’

While his mission is clearly defined, Krag is apparently inactive, instead analysing everything around him: people, things and emotions. Meanwhile the distraught narrator moves out of the hotel and into a cabin nearby, where events start to take toll on his mental health. He sees a dead man’s face peering into the cottage, becomes terrified by the wind blowing off the sea, and is affected by all noises. These contrasting reactions from the two main characters balance each other well, holding the reader’s interest right through to the final reveal.

Despite its age – the language is specific to the period, with flowing descriptions, a strong sense of place and formal conversations – The Iron Chariot does not feel dated. This seamless contemporary translation, which is true to the original style, renders with clarity the atmospheric, almost gothic, setting, and the Norwegian countryside, where the old ways of life are reluctantly making way for modern thinking and ingenuity. The titular iron chariot reflects this shift in mentality, with technological innovations being widely pioneered in what at the time was a largely rural country.

This societal shift is hinted at in the novel, but the emphasis is on the intricate detective work, the quirky private investigator and the thrilling suspense. Little wonder that this literary gem and its author inspired the creation of the Riverton Prize, now given annually to the best Norwegian crime novel.