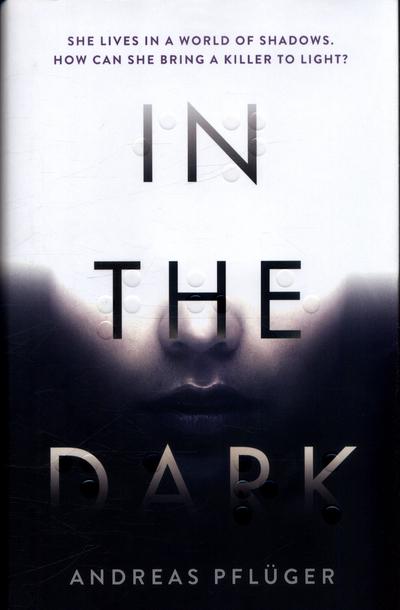 #RivetingReviews: Ewa Sherman reviews IN THE DARK by Andreas Pflüger

Jenny Aaron calls herself a policewoman but the reality is much more complex: ‘Her body is a weapon.’ As a member of an elite team tracking Germany’s most dangerous criminals across the world she was the best, ‘trained in combat shooting and in four martial arts techniques, extraordinarily resilient and distinguished in extreme situations’. Her daily tasks were also out of ordinary: ‘Handing over the ransom money in kidnapping cases. High-risk undercover investigations. Secret operations for Europol. Anti-terrorism through infiltration. Precision work.’ She was powered by emotional and physical strength, which apparently is a family trait – her father is Jörg Aaron, the legend of the counter-terrorism unit. But she also drew deeply on a spiritual source, Bushidō – the ideals and codes of honour that dictate the samurai way of life: ‘According to Zen, you must always have the signs of life and death in your mind’s eye, and you should even draw the sign for death on your forehead. Only then do you have the energy to fight to the end.’

When a disastrous mission in Barcelona caused her to abandon her wounded colleague (and her lover), Jenny lost her sight and spent the next five years fighting against memories and own cowardice and betrayal, and learning to survive in a world deprived of light. The struggle has been relentless, but her determination and incredible skills have enabled her to navigate in the darkness exceptionally well.

After being side-lined for such a long, painful period she is called back to her unit and asked to assist on a case. A prison psychologist has been brutally murdered in the cell of the notorious convict Reinhold Boenisch. The killer’s demand to speak to Jenny throws her back into the world of international crime and people who will stop at nothing to punish her. After the initial interviews, though, she’s convinced that Boenisch, already serving life for four murders, isn’t responsible for the psychologist’s death; years before, this man imprisoned her in the basement of his house, yet he didn’t kill her.

Making connections between her memories and listening ‘to the sound of lies’ she finally realises that she’s being pursued by Holm, a ‘polite sociopath’ with whom she once crossed paths. His ruthless brother Sasha, known as ‘Token-Eyes’, has been moved from Spain to the prison in question. Soon Holm is in control of Jenny’s life, as well as a bus full of Danish school kids. Communicating only with Jenny, he begins to make demands: release Sasha from prison, and hand over huge piles of money. The tension builds, and with each step our heroine seems more like a blind superhuman, rather than a disabled police officer.

The characterisation in this novel is excellent. Andreas Pflüger’s vast experience as a screenwriter and author brings life and authenticity to each person, regardless of their status in the plot. He portrays with verve and passion Jenny’s friend and mentor, one-legged Pavlik, the oldest and most experienced guy in the team; Demirci, the first woman in charge of the department – and Turkish to boot; and the flawed heroes, ordinary men and ruthless criminals that populate the novel.

A multi-layered, intelligent thriller, In the Dark is brilliantly translated by Shaun Whiteside, and offers all that’s best in the genre, mixing intense, edge-of-your-seat passages with more reflective sections, and alternating between the brutal, gripping present and the equally menacing past.

On another level this is an ode to the power of human spirit in a dark, sightless world. This quote from a Swiss writer Max Frisch Gantenbein initially guides Jenny:

‘A blind man claims to be blind because he thinks that otherwise he won’t be able to bear his life. As a blind man he doesn’t have to judge anybody, not even himself. That’s his liberation. He leaves other people with their secrets, because they were what tormented him, the impossibility of ignoring them. That way he can be happy’.

Ultimately, though, she chooses to train herself in echolocation and, like a samurai warrior, to deal with whatever comes her way and to receive the punishment she thinks she deserves honourably.