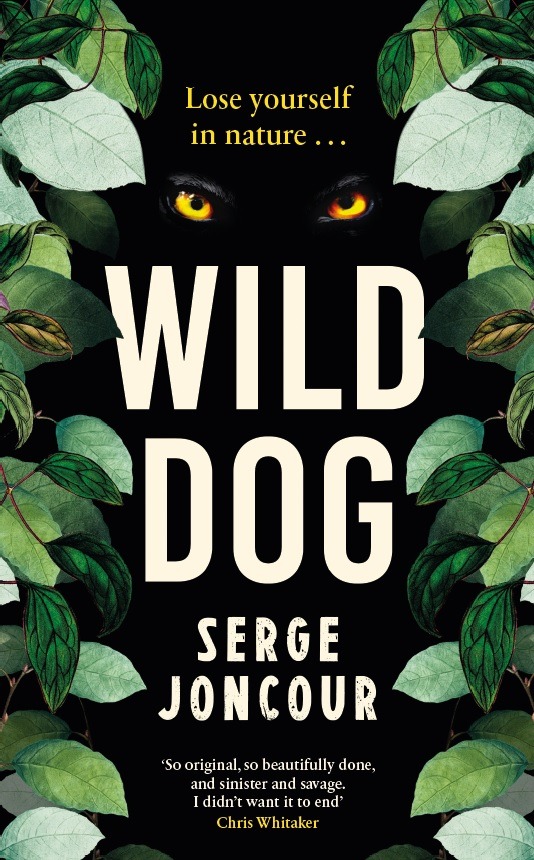 Wild Dog is Serge Joncour’s first novel to be published in English, and is published here in translation by Jane Aitken and Polly Mackintosh. It is an intense and truly philosophical thriller. Travelling through time, it seamlessly binds together the varied yet similar life experiences of people in an untouched location in the Auvergne region of France. The suspense seeps from each exquisitely crafted sentence, taking the reader into a world replete with complex emotional and moral dilemmas. Both a semi-practical guide to self-preservation and a homage to space and calm, it is also a grand metaphor for the human condition, asking the eternal question: what makes us different from the animals?

The narrative alternates between three weeks in August 2017 and events in the summer of 1914. Parisian couple Franck and Lise rent an isolated house in the thickly forested hills around the Lot river. In their fifties and childless, they’ve been together for over a quarter of century, understand each other perfectly, yet don’t want to share all their thoughts with each other. Lise has recently recovered from a serious illness, and turns to painting, as her career as an actress seems to be over. She is delighted at the prospect of losing herself in nature; however, her husband Franck, a film producer, is wary of a three-week holiday cut off from wifi or any mobile signal. His anxiety heightens as he realises that his new, young business partners intend to sell him out, banking on interest from Netflix, to which Franck is allergic. His production company thus becomes a battlefield between the young wolves, and the tired old intellectual warrior who is holding on to his artistic integrity.

As the wilderness encompasses the couple, their understanding of modern existence begins to shift. A huge, self-assured dog appears outside the house, in search of a strong new master, and as a fragile relationship between Franck, Lise and the animal is forged, the bloody history of their mysterious holiday home is revealed. During the First World War an enigmatic German lion-tamer was allowed to stay in the abandoned house, along with his eight big cats, which were born in captivity, but remained wild to the core. While the animals offered the women, children and older people remaining in the village some protection from wolves, for the villagers the German represented both the enemy and unarticulated emotions. His delicate connection with the wife of a mobilised doctor, presumed dead in the war, is beautifully portrayed and somehow resonates down the years and through the air into the current story.

The pervading heat, the sense of impending doom, and the confrontation with their primal fears all serve to blur the lines between the characters’ intellectual and visceral understandings of life, and therefore our own. Wild Dog’s richness of thought, its layered narrative strands and its tense undercurrents make it a raw, brutal and magnificent literary experience.