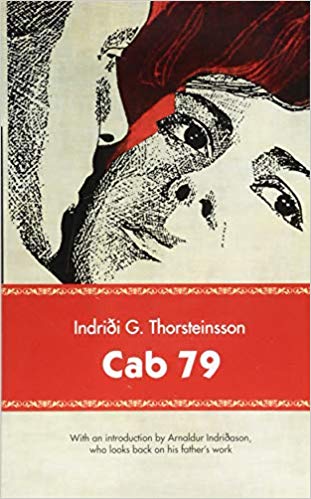 Sometimes a very slim volume of prose has a huge impact, not only on its contemporary readers but also on a nation’s conscience in the ensuing years. This is especially true when the nation is relatively small, and a whole generation of people perceive the novel as controversial and unique.

When Cab 79 (‘79 af stöðinni’) was published in 1955 it sent shockwaves across Iceland, and was made into an equally shocking movie. Having earned such a reputation, both the novel and the film became firmly established in the Icelandic cultural firmament, but until now the English-speaking readers have had no opportunity to read this little gem by Indriði G. Thorsteinsson. Now, they do, they will find in Quentin Bates’ translation a true labour of love – the transformation of older-style Icelandic into particularly fresh English, without losing the original language’s nuances and atmosphere, the stiffness of the formal conversations, the crude and casual banter between taxi drivers, and the vivid memories, full of longing for a simpler rural existence. Bates as a translator cut his teeth on non-fiction, journalism, Gudlaugur Arason’s Bowline before moving onto his current, well-received translations of writing by star literary crime writers Ragnar Jónasson (Dark Iceland series) and Lilja Sigurðardóttir (Reykjavik Noir trilogy).

Cab 79 tells the story of a doomed love affair in post-war Reykjavik between two young people whose circumstances and social standing are poles apart, and who are coming to terms with their country’s major transformation in terms of morality, attitudes to women and sex, and in terms of its position in the wider world. Married Gógó lives on her own, her husband Ólafur shut away in a mental institution in Denmark. When she meets taxi driver Ragnar, he becomes infatuated with her. But she sets strict rules on their illicit relationship, and soon their different backgrounds and expectations lead to turbulent times, with tragedy ensuing as Ragnar fails to cope:

‘Sometimes you have to kill something that’s good, something you’ve a fondness for, to give cruelty an edge.’

Melancholic and concise, Cab 79 is packed with vivid snapshots of a country facing a new age of affluence and leisure, of faster cars and stronger alcohol than it has ever seen before; a country whose traditional remoteness has been eroded by the presence of British and American soldiers during the Second World War, and by gaining independence from Denmark. Yet a strong sense of Icelandic fatalism persists in the novel, demonstrating that both nature and the power of the ancient sagas still maintain their hold on the country’s psyche.

Written in an understated style Cab 79 is replete with powerful vignettes: smuggled whisky is pitted against home-brewed akvavit; modernity is set against tradition; the boldness and freedom brought by sleek cars and easy money are contrasted with a society shaped by centuries of agriculture and fishing.

One of the most important names in Iceland, writer and journalist Indriði G. Thorsteinsson’s succinct dialogue, and fatalistic approach have been compared to Ernest Hemingway. This English version comes with a preface by Arnaldur Indriðason – the author’s son and undisputed king of the Icelandic thriller – plus an essay examining the film version of the novel, Girl Gogo.