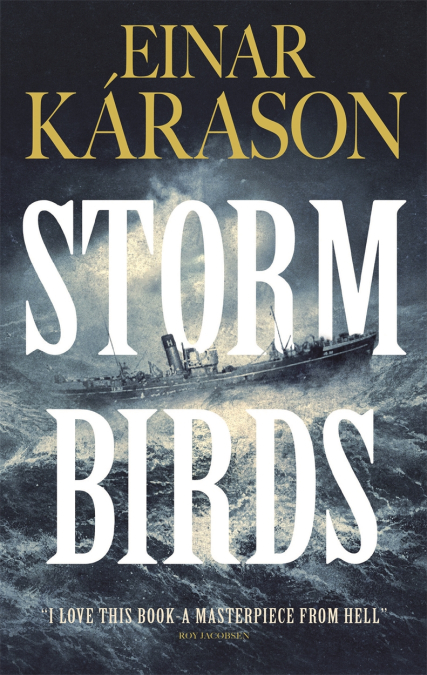 January darkness was enveloping the northern hemisphere when the Icelandic trawler Mávur (‘Seagull’) left Reykjavik on its journey towards the southern tip of Greenland and then Newfoundland’s Grand Banks, with the intention of returning with a hold full of redfish. Mission accomplished, the trawler prepared to take its precious cargo home when it was hit by a horrendous storm, lasting several days. Other Icelandic and international ships in the same situation were sending distress signals, yet no one could offer any practical help as the fishing grounds turned into a cold hell.

Storm Birds is told by an unnamed narrator, a member of a thirty-two-strong crew, and is based on true events that had occurred in the late 1950s. Bringing with him memories of other voyages, he describes both the harsh reality of being a fisherman working in dangerous waters, and the pleasure of the real camaraderie found onboard.

The descriptions of the violent weather that crushes both the vessel and its crew are powerful and somehow otherworldly – unimaginable for those who have never experienced such extreme conditions. Into these visions of a terrifying battle between unforgiving Nature and the human psyche, Kárason weaves sublime emotions and even flashes of black humour. The strongest man aboard, the bosun, is on the verge of giving up:

‘I think it’s best if I lie here while the ship goes down. I’ve been a seaman for years, and I’ve never seen anything like this. This is death itself.’

Yet he and the others are reminded of the principled life they’ve chosen: ‘If I were a rat, I wouldn’t want to drown in my hole.’ The youngest deckhand, eighteen-year-old Lárus, is also prepared for death – both petrified of Nature’s unrelenting force and proud to be a member of this group of men, beaten but not yet destroyed by the sea. Men who have only two hours’ rest in every twenty-four, but who eat hot meat and potatoes the ballerina-like cooks have managed to prepare, and drink strong, bitter coffee. Luckily, Lárus manages not to succumb to the madness that trying to survive the ordeal can lead to.

Storm Birds’ poetry and prose bring to mind Joseph Conrad, a Polish-British writer who famously toiled on board various ships, and whose work often has a nautical setting and depicts the human spirit facing an impassive, incomprehensible universe. Kárason’s professional path was similar. He knows what it is to graft at sea, in the most inhospitable conditions, to feel the cold water that can freeze a man within a couple of minutes, and the biting frost and ice that covers every available surface.

Translating literature requires no previous personal knowledge of the subject of the text, but in this case Quentin Bates’ own experience of seafaring can be seen in the effortless confidence with which he renders into English the nautical language, meteorological terminology and compelling images written by Einar Kárason.

Storm Birds will leave you breathless and reaching for an extra-warm blanket.