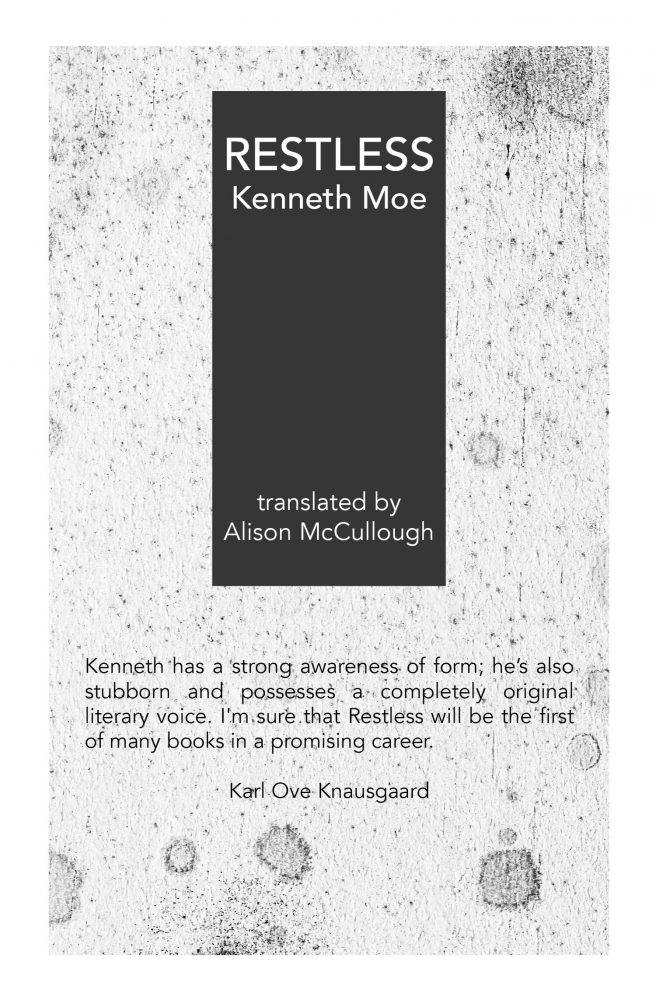 ‘Lonely people know nothing and are worth nothing.’

Within the first pages of Restless a young man sets the boundaries for his own existence, and in a striking introduction to his mental state embarks on an epistolary journey of self-analysis. He is writing a letter to the woman who has rejected him, in the process reflecting his inner turmoil and writing himself out of his emotional chaos, in a bid to gain some control over his infatuated, unsettling thoughts.

‘I blame anything and everything for my loneliness, all the things I don’t wish to reveal, but it’s precisely the loneliness that I don’t want to reveal! (These empty walls.) The logic of loneliness: I am lonely, therefore I deserve nothing but to be lonely.’

The book’s structure is important here: short sections, strong one liners, aphorisms, fragmented pictures of an uneventful daily life, observations of changing seasons, and various ramblings allow for a detailed analysis of the feelings that fight for supremacy in his head. At times he seems to live on a diet of inspired and very individual musings, then he turns into an angry, spurned and apparently misunderstood male, full of sexual fantasies. He is brutally honest in his opinions, which are sprinkled with moments of irony and humour, and sometime show glimpses of genuine pain. The desire and obsession he displays, however, could happen to anyone, anywhere. Indeed, a sense of timelessness and placelessness permeates the novel; there are virtually no Scandinavian references, unless mentions of home-made pancakes count – plain pancakes with a sprinkle of sugar, which signify every passing Saturday, the anchor of an ordinary pleasure.

Our protagonist seeks some kind of salvation, in the form of writing a novel – a masterpiece that might change his life. Literature could bring fulfilment and the recognition that he’s achieved something huge; however, only after it reinvents the manner in which literature interacts with the mundane:

Kenneth Moe’s Rastløs won the Tarjei Vesaas debut award. It was first published in Norway in 2015 by Pelikanen, the press founded by Karl Ove Knausgård, who, nota bene, was also an editor of this slim volume. Knausgård, the king of voluminous and controversial literary writing, hailed Moe as the new original voice to watch out for in future. The reactions to Moe’s work have been predictably divisive.

Alison McCullough’s translation is superb, conveying the internal confusion, doubt and self-loathing with incredibly concise language, maintaining the original’s tone and consistency while constantly balancing isolation and despair with the anger of a man who can behave like an immature misogynist or self-obsessed idiot. The strong, precise words and subtle nuances reflect the narrator’s one-sided relationship, in which emotions are not reciprocated and other points of view are absent.

Our nameless narrator is desperately searching for some sense in his emotions; he yearns both for love and for a definition of love that can pacify these emotions and allow him to understand them. This unusual love/hate letter was probably never intended to be sent, rather it was designed to provoke a response. This structural device certainly works, and although the narrator states ‘I’m well aware that I can’t trust these thoughts born of grief’, I would certainly trust Kenneth Moe’s words.