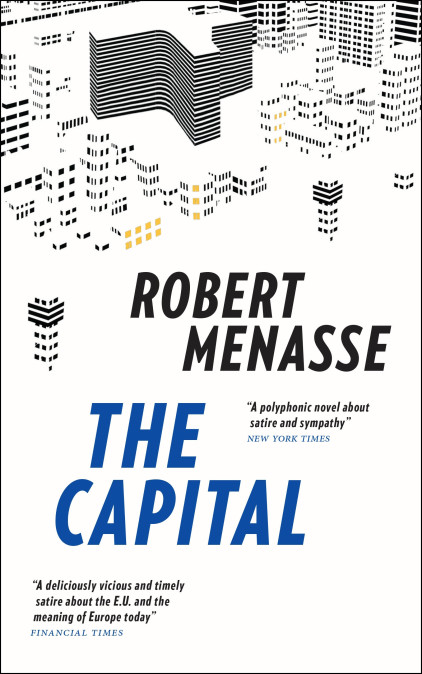 The Capital, in Jamie Bulloch’s superb translation, arrives for the English-speaking reader at a delicate time. Two years after it was published in Germany the novel presents an array of characters, all firmly anchored in Europe but at the same time representing differing perspectives on nationality and collaboration, and on what this means in the current political climate – some of them consciously supporting the concept of the European Union and its institutions, others fighting against the overwhelming bureaucracy and disillusioned with the whole system, while still others manipulate the system to their own ends and benefit from other people’s accomplishments.

Robert Menasse examines with an inquisitor’s eye the Eurocrats who have, or are convinced that they have, influence over the future, as well as those who for countless reasons cannot let go of history. The author analyses the intricate connections of the system, tosses in experiences of the upper echelons that hold the whole thing together, and of course examines individual desires, wondering what happens when local officials move into the political heart of Europe where they are to free make decisions on a much grander scale.

It all starts with a pig running loose in a Brussels square and the death of an unnamed man at the Hotel Atlas nearby. One Inspector Brunfaut starts an investigation, but it is immediately suppressed at the highest level. With the murder unsolved and the case still open, the policeman uses an IT contact at police headquarters to gain access to the public prosecutor’s office’s secret files. These don’t, however, explain the motive for the killing. Even the hitman Matek (who’s also a failed priest) can’t help, yet he does know he shot the wrong guy and goes on the run back in his native Poland. Both cases throw up more questions than answers and the appearance of an animal in the wrong place – symbolic of the EU’s negotiations with China over trade restrictions – adds absurdity to the mundanity of Belgian politics.

At the heart of this combination of sharp satire and philosophical essay lies an idea to celebrate the fiftieth anniversary of the European Commission in a style that improves its current poor profile. Greek Cypriot Fenia Xenopoulou of the insignificant Directorate-General for Culture hopes that the project will allow her to move to a more visible Directorate. She loves the idea of putting Auschwitz at the centre of the jubilee, as suggested by her Austrian PA, Martin Susman. But other EU institutions voice their opinions and nothing seems to go according to plan.

Elsewhere two men who have never met are also united through Auschwitz – one an elderly survivor and the other a retired economics professor who has caused controversy at a conference with his call to establish the EU’s capital at the former concentration camp. For both the horrific place remains the reason for the unification of Europe after WWII.

Vienna-born Robert Menasse delivers a sharp picture of a concept and system in crisis. With significant doses of irony and humour, he allows the reader to reach their own conclusions and offers ways to approach the words of the French political economist Jean Monnet: ‘National interests are abstract, the commonality of Europeans is concrete.’ Whatever your beliefs, I’m sure that the richness of The Capital’s themes will make you think.