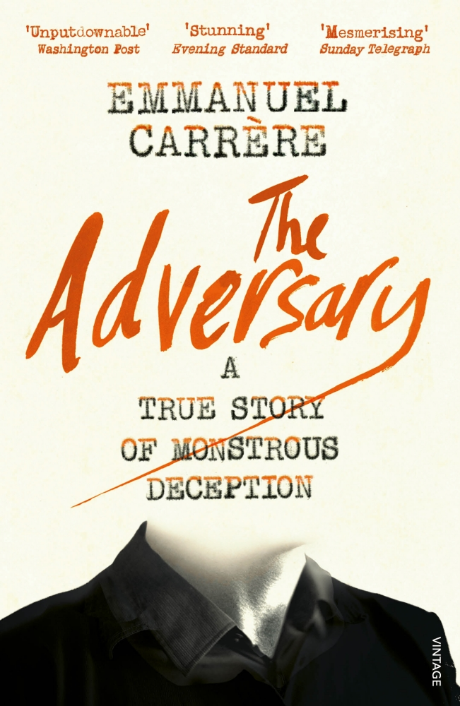 Jean-Claude Romand: a respectable doctor living in Prévessin near the French-Swiss border and working as a researcher at WHO in Geneva; conscientious member of the local community; loving father and husband. On 9 January 1993 Romand killed his wife, his two small children and his parents, and he tried to strangle his mistress. His suicide attempt failed, as did the fire engulfing the family home. This was the culmination of eighteen years of deceit and fabrication by a mild-mannered man who avoided drawing attention to himself, and it sent shockwaves of incredulity and terror throughout the world.

French novelist, screenwriter and director Emmanuel Carrère was fascinated by the murderer’s double life, but hesitated for six months before contacting him via his lawyer. His approach was to express interest in and deep compassion for the man, and to request an opportunity to connect in order to write a book, ‘to try to understand as much as possible of what happened’.

More than two years later – by which time Carrère was feeling disgusted by the tragedy of which Romand was ‘the agent and sole survivor’ – he received a pleasant and positive reply. And he found he couldn’t back down. So, when the police investigation and the psychiatrists’ reports were finalised and the trial commenced, Carrère took up a role as a journalist, observing the unfolding story of an ordinary man who went to unbelievable extremes to survive in a different reality from the majority of his fellow humans.

The carefully orchestrated and tightly woven web of untruths Romand built up around himself seem to have been prompted by a series of real events and influences. We discover that he was brought up both never to lie and to block out any bad news, and that his personality was shaped by religion, an inability to express emotions, a traditional and oppressive family environment, as well as the physical surroundings of the forbidding Jura Mountains. These rural roots conflicted with his cosmopolitan aspirations and seemed to create a sense of isolation and a fear of confrontation. Romand had found himself in a place of great loneliness and detachment, experiencing a profound feeling that his life had been wasted. But this apparent passivity was increasingly punctuated by outrageous lies aimed at attracting others’ attention, for example when he claimed he had cancer to gain sympathy.

Although it is possible to understand some of Romand’s actions, what is difficult to comprehend is how the people around him trusted him enough not to check how he spent his days and who his work colleagues were, and not to ask where his money came from. What is particularly baffling is how he managed to ‘compartmentalise’ his life so skilfully that he managed to sustain the fiction.

The Adversary: A True Story of Monstrous Deception, translated by Linda Coverdale and first published in 2001, had to wait until the next UK edition to be selected as a Book of the Year 2017 by The Sunday Times. It might seem surprising this recognition took so long, especially as the original book propelled its author into the international arena, and the novel was the basis for the 2002 film The Adversary. But perhaps this generalised hesitation has something to do with Carrère’s own initial approach:

It can be argued that the author’s role is always to create fiction, even when dealing with fact, as this passage seems to demonstrate. And perhaps this is the reason why the mesmerising prose of the book is so unsettling and uncomfortable. As Romand himself states: ‘The social part was false, but the emotional part was true’.

Thus moral ambiguity prevails – surrounding both the writer and the monster who is his subject.

THE ADVERSARY: A TRUE STORY OF MONSTROUS DECEPTION

Translated from the French by Linda Coverdale