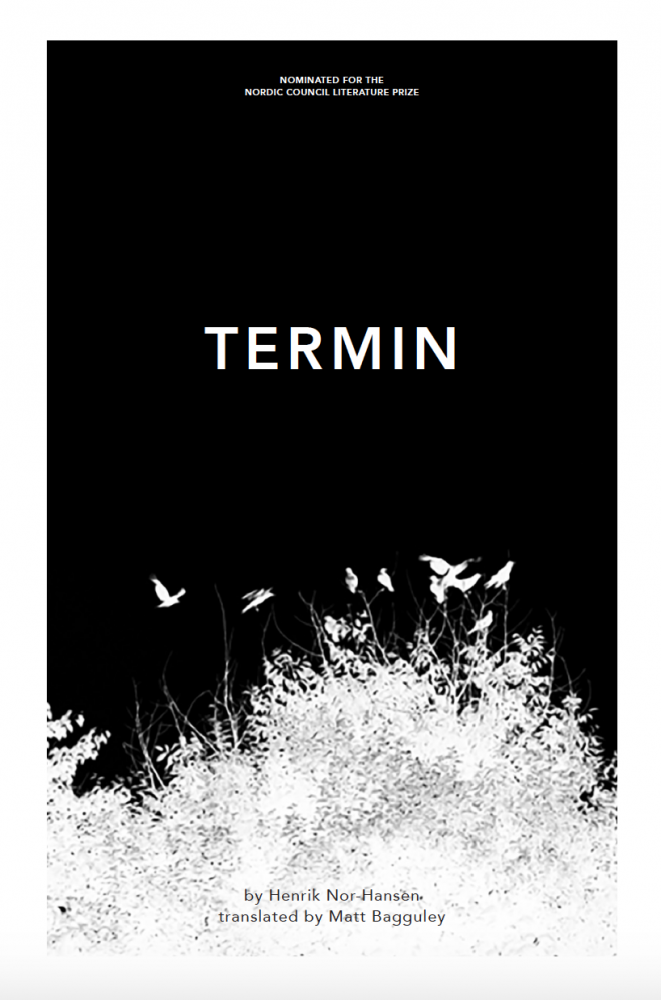 In 2017, there were two Norwegian nominees for the Nordic Council Literature Prize. One was Vigdis Hjorth, who’s controversial yet acclaimed novel Arv og Miljø (recently published as Will and Testament in a brilliant translation by Charlotte Barslund) had been the most written-about book of 2016. The other nominee, some people were surprised to hear, was Henrik Nor-Hansen for his novella Termin: An inquiry into violence in Norway.

Nor-Hansen is not a particularly well-known writer in Norway, and there were those who objected to his nomination. How did his disturbing novella about the repercussions of random violence compare to the literary standards of Hjorth’s family tragedy? Neither writer ended up winning the prize, but the criticism of Nor-Hansen’s nomination was unwarranted, as his short, stabbing inquiry into the cruelty of neo-liberalist society is both chilling and highly accomplished.

With forensic detachment, the author examines the overwhelming economic prosperity Norway experienced in the early 1990s, and the effects this had on the seaside village of Hommersåk in western Norway. As property prices soar in nearby Sandnes and Stavanger, Hommersåk is filled with housing estates, and we see the outline of the ‘considerable socio-economic ripple effects’ of Norway’s unprecedented wealth.

Termin centres on a victim of this ripple effect. On Midsummer Night in 1998, twenty-six-year-old Kjetil Tuestad is found unconscious and severely beaten on the outskirts of Hommersåk. He goes through a slow convalescence and finds it increasingly difficult to relate to others. Once out of the hospital, Kjetil isolates himself in a basement flat. He feels little affection for his wife. He tries to hold paid employment, but his contract is never renewed. He is in and out of psychiatric clinics. In the end he resorts to violence. ‘In his own words’, Nor-Hansen writes, ‘the days just passed’.

It is never clear whether Kjetil’s catatonic limb state was caused by the brutal assault or by living in an increasingly detached and materialist society. In Sandnes, we learn, ‘the median income was above the national average and households had greater purchasing power. Nevertheless, dissatisfaction was widespread.’ People suffer from obesity and silicosis from drinking sugary drinks and inhaling cement dust from industrial areas. With the introduction of social media in the early 2000s, ‘a new and very distinctive form of narcissism was seen to emerge’. Youngsters start torturing animals, small children are being stoned, and there is a general ‘spread of fear and aggression’.

Stripped to the bone, Nor-Hansen’s prose is about as ornamental as a medical epicrisis. Everything has been ‘reported’ to the narrator, as though the narrative is a part of an ongoing criminal investigation. In true Ballardian fashion, Nor-Hansen’s modern society seems to resemble the end of days, but perhaps we should expect no less from the author of titles such as An Account of the 2010 Travel Stipend and A Short Evaluation of Psychosocial Stress.

Published by Nordisk Books, Matt Bagguley’s skilled translation is just as exacting as the Norwegian original. In many ways, Kjetil’s story, while particular to his gender and socio-economic background, in its depiction of societal cynicism has universal appeal. In this way, Termin has become ever more relevant in the years since its first, Norwegian publication.