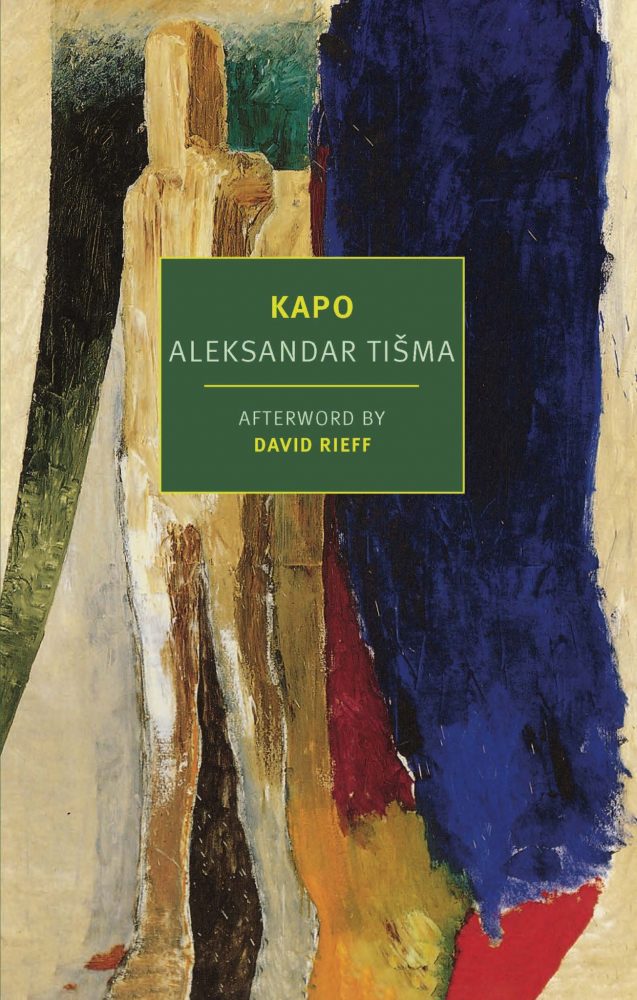 Kapo reflects on the darkest recesses of a mind warped by childhood prejudice and splintered by the experience of the Auschwitz death camp. Any novel focusing on the Holocaust is a challenging read, yet Kapo is a particularly bleak and intense one. The depictions of cruelty and dehumanisation are shocking, and the dispassionate account of existence in the camp is stark and poignant. Most horrifying, though, is the forensic study of the personal guilt and responsibility of the titular kapo, Vilko Lamian. As a Jewish prisoner working as a kapo, Lamian’s privileged position allows him to prove his worth to the Germans, yet only at the cost of his fellow inmates. Ostensibly his reason for betraying his natural comrades is to stay alive: he is prompted by fear and the instinct for survival. Disturbingly, however, these motives are hard to separate from his own desire and enjoyment of cruelty.

Kapo is the final instalment of Aleksandar Tišma’s Novi Sad trilogy, which explores the haunted legacy of ‘the survivor’ – a common thread that is given a different incarnation in each book. In this instance, Lamian is a man who serves his German captors well, aware that the value they place on his life depends on his ability to line their pockets, and that an act of capriciousness could get him killed at any moment. Yet, as he participates in a mass killing of Serbian women and children and revels in his power over his fellow inmates, we also see Lamian indulge his own perversions. Guilt and fear are subsumed by violent urges and personal gratification. Significantly, we learn that Lamian was born a Jew but converted to Catholicism and was brought up hating his heritage. He is also a Croat with a disdain for Serbs, and even before arriving at Auschwitz his mindset lent towards Nazi racial stereotyping.

This all comes to light over two timelines, with the story opening in 1984 in Croatia, decades on from Lamian’s experiences in Auschwitz. By this point, he is living in Banja Luca in communist Yugoslavia. A chance newspaper article alerts him to the fact that one of his Jewish victims, Helena Lifka, survived the war. It transpires that while in Auschwitz, Lamian used his position to prey on vulnerable women arriving at the camp, selecting victims for abuse. He took Lifka, then a young girl, to a shed and raped her. Even now, her testimony would sink him. Disturbed by the idea of a witness to his past, Lamian sets out in search of Lifka. He tells himself he is seeking forgiveness, yet is this just a delusion? Past and present collide as he finds a woman he thinks is Lifka. The possibility of redemption finally comes, but uncertainty hangs over how likely this is for a man still so consumed by his culpability in the Holocaust. Can years of entrenched self-deception and self-pity ever give way to genuine remorse?

Kapo was written before the breakup of Yugoslavia, and the novel touches on the complex divisions within that society which would soon boil over into war, exposing racial and religious fault lines and again occasioning genocide. As Tišma probes these tensions, the Holocaust is painted as an unheeded warning from history.

Kapo remains as relevant today as when it was first published in 1987. There can be few more powerful insights into the broken mind and the spiral of decline occasioned by terrible circumstances. In telling the story of a man bound to evil not just by coercion, but through his own willingness, Tišma holds up a frighteningly perceptive mirror to the depths a soul can plunge. This is a devastating but important read.

Translated from Serbo-Croatian by Richard Williams