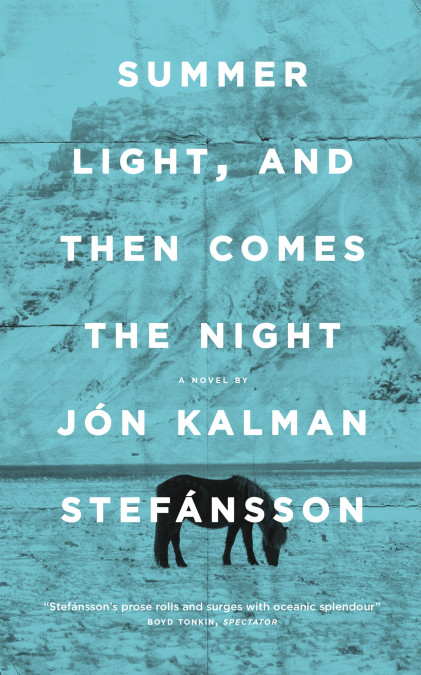 Existential novels are often weighty tomes, moody and complex. Not so Summer Light… which deals with the theme of life’s uncertainty in playful and airy tones, revelling in contradiction, contrasting insignificance with meaning, and fine detail with broad brushstrokes. There’s truth in absurdity here; when a barking dog causes the beloved local doctor to die of fright, the villagers are warned not to get ill before his replacement arrives.

The village is both self-contained and a microcosm of the wider world, (for small think big), and the endless light of summer is juxtaposed with the endless night of winter. Stefánsson enjoys confounding expectations of either, constantly searching for antonymous meaning in things.

‘We seem, however, to have one thing that other villages don’t – there’s no church here.’

What the village claim to possess is actually an absence of something – no church, no graveyard; an intentional paradox and typical of the novel. The village is missing out on the ‘good news of eternity’, yet it has the highest percentage of octogenarians in the country. Some villagers fear a priest would arrive with death on his coattails, so when someone raises a petition for a church, only thirteen residents sign it.

Stefánsson is at pains to point out that this is a novel of ordinary people. The only local star is the projectionist at the community hall, who had a bit part in a movie once. Jakob the lorry driver is a happy man, while Jónas struggled through puberty – the suicide of his father hit him hard. Beautiful Elísabet appears in many a fantasy and Kjartan’s wife exacts a wicked revenge for his affair with Kristín, while Harpa delights in taking David’s virginity. The novel is a soap opera, all life is here; love, longing, and loss, birth and death and everything in between. Stefánsson’s fascination with ordinary people – the ‘essence of men is often hidden’ – makes gripping reading.

The structure of Summer Light… is unorthodox, eschewing linear for multi-track, creating a seductive whole-village voice, a sort of Greek chorus that has usurped the production, and now muses on and philosophises about life. Some stories begin in the middle, come to the fore, then slip into the distance unresolved, some re-emerge later on; others are simply tangential. The overarching effect is reminiscent of Dylan Thomas’s original idea for Under Milk Wood – a village cut off from a world that thinks it mad, only for the residents to realise that it’s the outside world that is really mad and they are safer in their isolation.

Like Under Milk Wood this small world is bursting with life, and through it Stefánsson manages to make light work of his heavy themes.

SUMMER LIGHT, AND THEN CAME THE NIGHT

Paul Burke writes The Verdict column for nbmagazine.co.uk and interviews, articles and features for crimetime.co.uk. He has worked in the public, private sector and voluntary sector. Paul is a book collector, lover of literature in translation and a crime fiction aficionado.