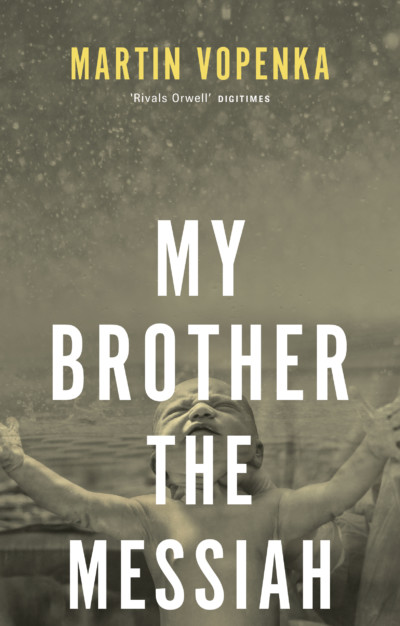 My Brother the Messiah is a philosophical novel set in a post-apocalyptic world, between eighty and one hundred and fifty years in the future. Humanity has walked with open arms into climate catastrophe. Large parts of the world are uninhabitable and the surviving societies are fragmented and isolated from each other. Rather than striving for a new future, life remains bound by the strictures of the past: old religion and science, corrupt models of government and a faded understanding of philosophy. Sadly, this is still a world of division and conflict. In hope more than expectation past follies are rehashed, inevitably leading humanity down a cul-de-sac in which history repeats itself.

Usually a dystopian tale draws the reader into the detail of the nightmarish vision, often exaggerating the role of environmental factors in how the nature of the ‘new society’ is determined. Vopenka, however, eschews this temptation and employs very little extraneous detail. Instead he presents a narrative focused almost exclusively on his characters, on human nature. This is a novel about the spiritual and secular nature of our collective and individual existence.

It’s a depressing, but wholly credible, exploration of humanity’s reluctance to tackle adversity and change with radical solutions and with cooperation. Having allowed the disaster to happen, the people of this new world have little energy to cooperate to rectify things. There’s a warning for us here, of course; Vopenka is addressing the present. We are currently on a course for climate disaster, and hope without action will get us nowhere.

Life in the Eastern European enclave in which the novel is set is about survival. The community is largely cut off from the wider world, and Marek, its spiritual leader, is dedicated to the teachings of his dead brother Eli, a Jesus-like figure – the new Messiah. As the novel opens Marek is questioning his faith. The arrival of a young lover, Natalia, only increases his doubts about Eli’s teachings and the way they have been manipulated since his death. Marek’s subsequent journey into the past is the vehicle for the philosophical themes of the novel.

Marek is a compelling character and his personal story is fascinating, but this is a novel of ideas, questioning humanity’s self-destructive drive, raising questions about the rise of fascism, religious divisions and hatreds in troubled times. Why did it come to this? One man opines: ‘The Jews, obviously.’

Cast adrift, stripped of technology and creature comforts, closer to the fundamentals of what it is to be human, we still seek to complicate life, obfuscate in the face of trouble, deny disaster, pervert belief and crave bad structures and leadership. This is not a comforting image of humanity. Vopenka’s prose is bone dry, his thinking original, provocative and engaging. My Brother the Messiah is a challenging read but a rewarding one.

MY BROTHER THE MESSIAH