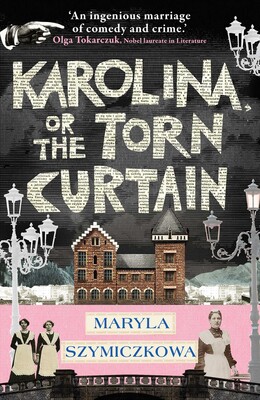 Karolina, or the Torn Curtain is a witty and engaging historical murder mystery, a clever pastiche of British golden-age crime fiction projected onto an earlier time and a distant place. The titular reference to one of Hitchcock’s films is, of course, entirely intentional and this lampooning of the class structure and customs of fin de siècle Cracow, Poland, is delightfully enjoyable. However, beware; while the themes are delivered with page-turning panache, this light touch belies a dark mystery, a background of decay associated with the end of the Austro-Hungarian Empire and an unsavoury nationalism. Cosy it may be, but the observations of society and human nature are both acute and relevant, particularly in view of Europe’s current malaise.

The off-stage rape and murder of a young girl opens an investigation bound by strict social codes of address and behaviour, which make for awkward confrontations and misunderstandings. Breaking all the rules is an unlikely detective, Commissioner Stanislav Jednorog, who reluctantly leaves his night-time revelry to assume responsibility for investigating the killing.

The tragic affair begins on Easter Saturday. Zofia and Ignacy Turbotynski return from the Resurrection Mass angry because her cousin Josefa, unable to resist a dig at Zofia’s rural upbringing, has queered the pitch with Ignacy’s boss, Professor Rostafinski, over a possible promotion at the university. Zofia does not need reminding that she is still seen as an outsider in city that considers itself the centre of culture and good taste. So when Franciszka, the housekeeper, informs them that the maid, Karolina, has upped and left, Zofia thinks the world is against her. Bemoaning the extra work, the Turbotynskis turn their attention to the earthquake in Laibach and how this might have affected the emperor in Vienna hundreds of miles away. Then a police cadet arrives, and they learn that Karolina has been murdered.

As the official hunt for the killer begins, Zofia and Franciszka are drawn into the investigation, and Zofia soon discovers that Commissioner Jednoróg has impeccable manners, at least to begin with, but he struggles to find the right euphemism for what happened to their seventeen-year-old servant, who has been violated before being killed close to both the army barracks and the brothel – neither a place for a decent girl.

There’s a knowingness to this novel, and its analysis of the religious and political mores of the times is sharp; but more than anything this is a thoroughly entertaining, breezy thriller by the duo of Jacek Dehnel and Piotr Tarczynski, writing under the name Maryla Szymiczkowa.

KAROLINA, OR THE TORN CURTAIN