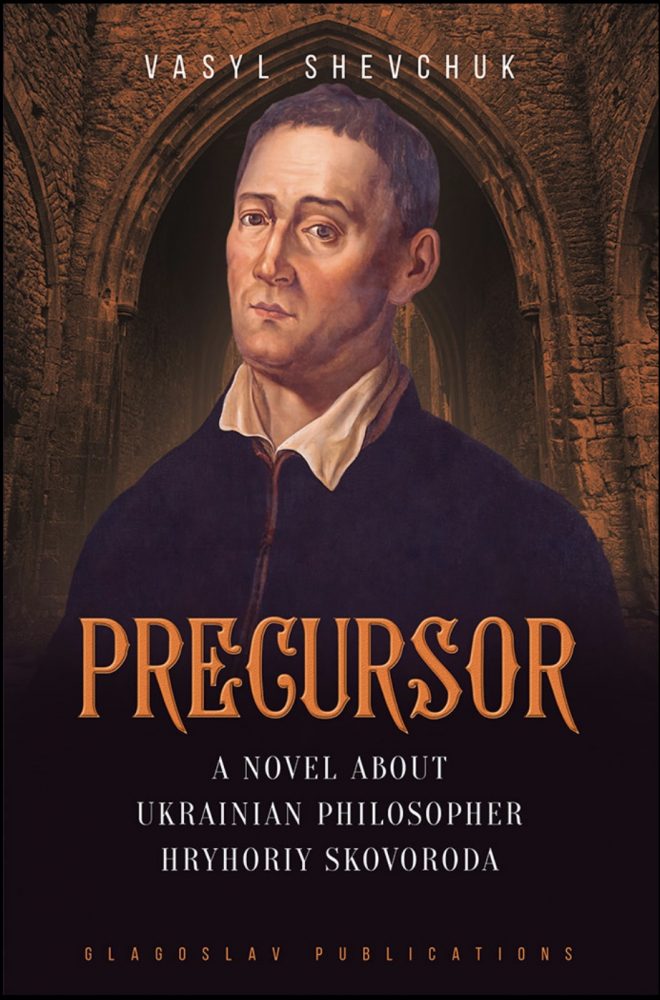 Originally published in 1969, Precursor tells the story of the philosopher Hryhoriy Skovoroda who lived from 1722 to 1794. Following its success, the book’s author, Vasyl Shevchuk (1932-1999), went on to write several more novels about Ukrainian historical figures.

Skovoroda was an unconventional figure whose attitudes towards religion, justice and freedom for ordinary Ukrainians led him to live a nomadic life, moving from place to place in an attempt to escape the constraints the world wished to impose on him. His writings are still read today. The origins of the title Precursor are not entirely clear. In the book, the college where Skovoroda has his first brief teaching job boasts a statue of the Holy Mother or ‘The Precursor’, so the name may be a reference to John the Baptist, who was similarly ascetic and itinerant.

A recurring theme in the novel is freedom. Each chapter is described as a ‘net’, in the sense of a contraption for catching a bird or fish, and usually ends with Skovoroda escaping something or some obligation – the onus to teach things in a certain way, to enter a monastery, to get married, or to accept a way of life he thinks would restrict his freedom to write and express his views. Time and time again his views conflict with those of the church. But it’s not just a question of intellectual freedom: there is also the ever-present threat of becoming a serf, something that was a reality for many living during Skovoroda’s time and duly befalls several characters in the novel. Ukraine was ruled from Moscow, and even if the Romanovs (Tsarinas Elizabeth and Catherine the Great) claimed to be enlightened rulers, the oppressive reality described here is very different. At the same time, however, Skovoroda is portrayed as living in a multilingual, cosmopolitan culture, speaking not only Ukrainian, but also Russian, Latin, Polish and German.

This is still the eighteenth century filtered through a 1960s lens, though; so while the text is sprinkled with words like ‘steed’, ‘verily’ and ‘forsooth’, Shevchuk doesn’t spell out every detail of his protagonist’s inner life, and is happy to leave gaps between different episodes. From the opening college in the town of Pereyaslav, the book weaves backwards and forwards across the region: Kyiv – Moscow – St Petersburg – Kharkiv, as well as numerous villages and monasteries along the way. The effect is like slowly leafing through a flipbook of diverse scenes from the Tsarist Empire.

Characters leave and reappear and grow old, including Skovoroda’s brother and other family members, and pupils at one of the colleges where he teaches. They talk in rapid-fire riddles and figures of speech, sometimes to a bewildering extent. One verbal sparring match alone features ‘If you fear the wolf, you’ll never catch any mushrooms’, ‘What little Ivan does not learn, big Ivan will never know’, ‘Fools lead the calmest of lives’ and ‘A meek calf suckles two mothers’ – and that’s just for starters.

Skovoroda’s stubbornness is impressive (he even insists on digging his own grave in the spot where he has decided it should lie), but the philosopher’s relentless moral integrity does make it rather hard to warm to him. Much more appealing is his country itself. You could almost say that Ukraine is one of the main characters, and the way in which it is depicted is often bucolic: at its best, a landscape of bees, guelder roses, cherry blossom, flute music, beautiful cities, and hospitable people who frequently burst into song. If this portrait sounds tempting, it’s worth noting that Glagoslav’s catalogue includes plenty of other books from Ukraine, as well as Russia and Belarus.

Translated from Ukrainian by Yuri Tkacz