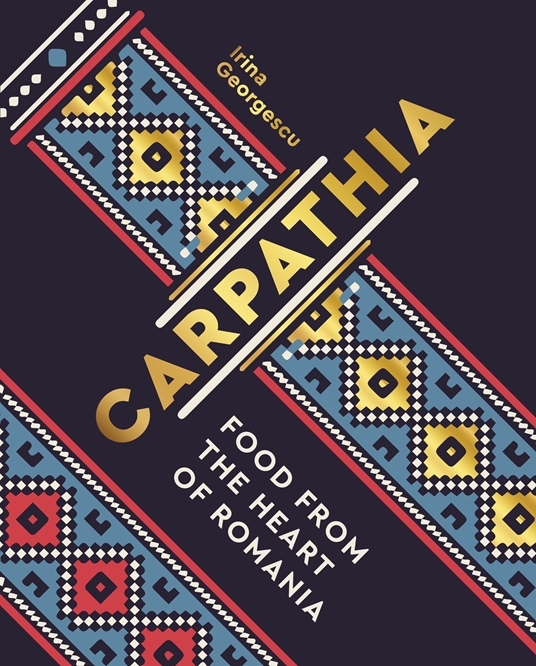 As we were preparing for our Romanian reviews special this month, I had originally planned to review the forthcoming English translation of The Book of Perilous Dishes by Romania Rocks 2 author Doina Ruști. Due for release by Neem Tree Press in early 2022, the novel is tantalisingly billed as the tale of a magical recipe book, which propels a slave chef in eighteenth-century Bucharest to such culinary fame that he is captured by the city’s prince and installed in the palace, where he promptly wreaks havoc with dishes that bring about ‘damaging sincerity, forgetfulness, the gift of prediction, or hysterical laughter’. Ultimately the proofs of Ruști’s novel weren’t ready in time, so the chef and his unsuspecting diners’ fortunes remain to be savoured another day. But the promise of a foodie intrigue from Romania left me pondering: what do Romanians like to eat?

In Carpathia, the debut cookbook by Romanian-born, UK-based food writer Irina Georgescu, I found the answer. The recipes in the book may not be touted as having magical properties, yet through the evocative descriptions and sumptuous photography that accompany them, Georgescu invites us on an enchanting journey through the culinary and cultural landscapes of Romania.

As she shares the dishes that shaped her childhood in Communist Bucharest and that continue to occupy a place in modern-day Romanian food culture, Georgescu adds a generous sprinkling of insights into their origins and roles in Romanian life past and present. Some of these food memories are personal, others collective, many both. In the preamble to her recipe for scovergi, the yoghurt and cheese flatbreads that she nicknames ‘Romanian popcorn’, Georgescu recalls how she and her family used to pass them around while watching TV – ‘even when television was on for only two hours a day and full of programmes about the achievements of the Communist Party’. In this anecdote and several others, the shadow of communism looms large; yet, while Georgescu writes soberingly about extreme rationing and attempts to homogenise the country’s cuisine to a single regulation cookbook during the Ceaușescu era, she also depicts a stealthy resistance that kept the pleasure of food alive even in the darkest times. In the introduction, she pays tribute to her mother’s ‘culinary ingenuity’ with the humblest of ingredients, and later on – in the chapter on bread – she remembers how her family would erupt with ‘cheers of joy’ when her father returned from weeks of working away in Transylvania with the sweet spoils of black market ‘Hungarian chimney cakes’ (kurtos kalacs) in tow.

The recipes themselves capture the spirit of resourcefulness that Georgescu describes, marrying influences from the various cultures that have rubbed shoulders with Romania over the centuries, recombining familiar tastes in unusual ways, or elevating everyday ingredients into special-occasion fare through long, slow cooking times and multi-step processes in which any family member within sniffing distance of the kitchen is enlisted to lend a hand. In this way, we find real-life glimmers of the alchemy that Ruști’s novel plays on, a sense of the imaginative and affectionate touches that can make a dish more than the sum of its parts.

The book is divided into six chapters: small plates; breads; broths or borş; main dishes; desserts; plus a final chapter devoted to pickles and preserves, as brines and sugars are conjured to protect the haul of the summer harvest, and provide sustenance and succulence through the winter months. Like the recipes in this final section, Georgescu’s writing occasionally has a bittersweet quality as she chronicles the memories that different dishes and ingredients summon, the warmth and vibrancy of her descriptions mingling with notes of ‘longing for those moments I can’t bring back’. I’ve often been moved to try recipes from cookbooks, but I don’t think one has ever moved me per se. Carpathia managed to do both.

This is a beautiful book in every sense of the word, a memory-laden feast for the eyes, tastebuds and imagination. Pictured here are some of the recipes I’ve tried so far, and I’ve bookmarked a cluster more. By the time Romania Rocks 3 comes around, I hope to have tried them all!

With the kind permission of the publisher, Francis Lincoln, I’m also delighted to share one of the recipes from the book below – the perfect way to usher in the festive season, Romanian style!

CARPATHIA: FOOD FROM THE HEART OF ROMANIA

Georgescu tells us that in Romania these ‘incredibly moreish’ cheesy nibbles are traditionally served with a shot of țuică (Romanian plum brandy). Whenever her family had guests for dinner, she would be tasked with cutting them into ribbons or making the knots while her mum was preparing them.

This ‘gorgeous garlicy dip’, Georgescu says, is often served the night before St Andrew’s day in the belief that ‘the garlic keeps evil spirits away and spiritually cleanses the house’. Having sampled its gorgeous and garlicy credentials, I reckon the evil spirits don’t know what they’re missing…

Georgescu describes this as the ‘ultimate crunchy salad’. After trying it, I’m inclined to agree – even cabbage sceptics might be converted!

According to Georgescu, this intricate bread ‘is torn over the bride’s head at weddings in the hope that the crumbs will predict the number of children she will have’. In Romanian folk wisdom, sticking some of the raw dough to fruit trees in spring is also believed to ensure them a bountiful year.

Emphatically ‘a big thing in Romania’, Georgescu writes that this mixture of fermented wheat bran and polenta is commonly used in meat and vegetable broths to add a sweet-and-sour flavour, and it also boasts health benefits that are ‘right up there with kombucha, kimchi and miso’. In testament to its importance in Romanian cuisine, it even has its own dedicated chapter in the book.

Georgescu tells us that Romanians love their rice-stuffed vegetables, ‘from peppers and tomatoes to beetroot and kohlrabi’, and often use a range of other grains, such as millet.

Georgescu explains that this fruity dessert takes its name from the traditional Romanian dance, in which ‘couples put their arms on each other’s shoulders and spin around elegantly, women swirling their beautiful pleated skirts and marking the pace with a quick stomp. It is part of village life at celebrations or on Sundays after church, when people play music, dance and eat good food.’

Sour cherries fermenting with sugar, ready to make vișinată in time for Christmas. Georgescu writes that ‘crafted drinks are a staple of any Romanian household’, describing this almond-scented fruit liqueur as ‘a little tangy, and exactly what is needed after one of our robust desserts’.

Carpathia: Food from the Heart of Romania by Irina Georgescu

This is the traditional Romanian celebration bread for Easter and Christmas – richer than a brioche and loaded with a rum-spiked walnut filling. My contribution as kitchen helper was to hold down the kneading bowl while my mum lifted the dough in the air and slapped it right back down in the middle. This was her technique for incorporating the butter. In spring cozonac is baked on the last Thursday before Easter Sunday, creating wonderful aromas in every house and bakery, making your day feel glorious as you stroll through the alleys.

For the maia (starter):

To make the maia, combine all of the ingredients in a bowl, cover and set aside in a warm place for 25 minutes or until doubled in size.

To make the dough, dissolve the yeast in the milk. In a separate bowl, combine the egg yolks with the salt, then add the sugar and rum. Pour the egg mixture over the maia and add the milk and yeast, then gradually add the flour, citrus zest and vanilla. Transfer to the bowl of an electric mixer fitted with a dough hook. Knead for about 10 minutes or until the dough is soft and comes away from the sides of the bowl. Add the butter, a little at a time, kneading after each addition until well incorporated. (I prefer to do this by hand as it is more gentle on the dough and you can feel the mixture becoming silky and elastic – an indication that the butter has been well incorporated.) Leave in a warm place (over 21°C/69.8°F) to rise for 1½–2 hours.

To make the filling, fold all of the remaining ingredients into the whisked egg whites and set aside.

If the dough is too soft to handle after rising, knock the air out of it and refrigerate for 30 minutes. Use the oil to grease the worktop, turn out the dough and divide into four. Using your finger tips, stretch one of the pieces of dough into a rectangle about 30 x 40cm (12 x 15.in), with the long side parallel to you. Spread a quarter of the filling evenly onto the dough and roll it into a log. Repeat the process with a second portion of dough.

Grease and flour two 12 x 26cm (4. x 10.in) loaf tins. Place one log over the other to form an ‘X’ shape. Twist the two logs of dough, starting with one side of the ‘X’, then repeat with the other side. Lift the twisted bread and place into the tin. Repeat the process with the remaining two pieces of dough, then cover with a damp tea towel. Leave to prove in a warm place for at least 1 hour.

Cool the cozonac upside-down on a wire rack, so the top doesn’t press on the rest of the bread and make it stodgy. Cover with a kitchen towel until completely cold. Slice and serve with a glass of hot milk.