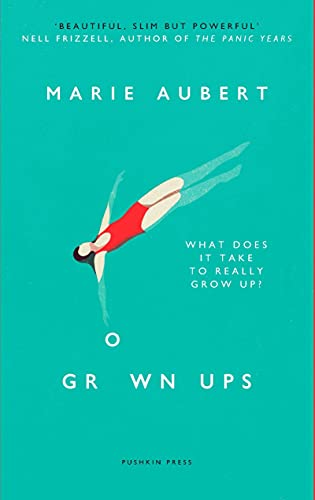 ‘It’s the sort of thing that sisters know, I think to myself, how to hurt one another…’

So muses forty-year-old narrator Ida in Grown Ups, the toothsome debut novel by Norwegian author Marie Aubert. This lithe family drama is Aubert’s first book to be translated into English, and follows lonely architect Ida as she travels to her family’s fjordside summer cabin, where preparations are in full swing for her mother’s sixty-fifth birthday. Already encabined there are Ida’s younger sister, Marthe, Marthe’s husband and his six-year-old daughter, with the sisters’ mother and stepfather, Stein, due to arrive the following evening.

Unbeknown to her family, childless Ida has just set in motion plans to freeze her eggs using a Swedish fertility clinic and is keen to share the potentially life-changing news that weekend. Unfortunately for her, in an unwitting feat of one-upwomanship, serially eclipsed sister Marthe has more concrete ‘big news’ to break. After years of trying and failing, she’s finally managed to fall pregnant.

With a healthy dose of titular irony, in the wake of Marthe’s revelation the sisters snap back into the worst of their childhood behaviours. Rosie Hedger’s translation brilliantly captures the tensions as lifelong ‘super-daughter’ Ida seeks to upstage her sibling in every way still available to her – namely, by earning her pseudo-maternal stripes as ‘best buddy’ to Marthe’s difficult stepdaughter, Olea, by day, and by flirting shamelessly with her tippler husband, Kristoffer, by night. Meanwhile, perennially sickly Marthe lollops from hammock to bed, infuriating Ida by pawing obsessively at her still-invisible bump.

Ida isn’t strictly a likeable character – in fact, her behaviour can be deliciously despicable – but Aubert does a compelling job of making you feel for her. Ida’s sense of isolation in a society that, for all its modern trappings, still bows to the age-old norm of coupledom and children as the ultimate imparter of meaning, is acutely painted. And with such a void gaping within her as she reels at being ‘overtaken’ – perhaps irrevocably – by her friends and now her sister, it’s hardly surprising that she has scant goodwill left to give.

Ida’s view is tinted by a dash of ‘the grass is always greener’ as she weighs the rhythms and routines of family life against the alternative of ‘five or ten or twenty or thirty years ahead … all the same from here on in’. Clearly, any categorical dichotomy between familial plenitude and the hollowness of a single, childless existence would be overly simplistic – the internal wranglings of Marthe and Kristoffer’s relationship are testament to that. Yet, whatever the imperfections of the marriage and motherhood ideal, these cannot dislodge the impression that a life of ‘lonesomeness’ is even more dire. However much Ida revels in seeing Marthe’s bubble burst, and whatever momentary pleasure she gleans from sticking in the needle herself, that visceral emptiness lingers on. And such is the force of Aubert’s storytelling, you can’t help but ache along with her.

This book is a little firecracker that, with its nimble gearshifts, will make you laugh, think and feel. I’ve no doubt it will stamp Aubert’s name on Anglophone literary horizons, and I’m itching to see what she comes up with next.