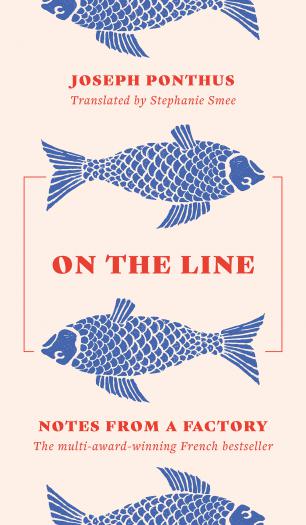 #RivetingReviews: Rosie Eyre reviews ON THE LINE by Joseph Ponthus

Brittany’s agro-industrial factories might not seem like an obvious source of poetic inspiration. On the Line, the novel in verse that transformed casual factory worker Joseph Ponthus into an overnight literary sensation in France, unravels this assumption and weaves an unassuming masterpiece in its wake. Subtitled Notes from a factory, this twenty-first-century vision of industrial life follows out-of-work humanities graduate Ponthus – a former Parisian social worker who has been unable to find employment since moving to Brittany – as he resigns himself to the precarious bidding of the temp agency.

From the opening stanzas – when he whips out a grandiloquent line from Hugo in response to the agency’s question of when he can start work – Ponthus’s deadpan humour and literary hinterland shine through:

‘I pull out the Victor Hugo

“Tomorrow at dawn when the countryside pales I guess”

six in the morning’

Over the next sixty-six chapters, we travel with him from factory to factory – beginning with dayshifts in prawn and fish processing, moving on to long nights of ‘crumbed fish duty’ and ‘draining tofu’ on the ready-meal line, taking in a pre-Christmas stint of ‘shovelling whelks’ in a shellfish factory, and winding up in the slaughterhouse.

From the outset, Ponthus makes no bones about the ‘grimness’ of his new occupation. As weeks stretch into months and the conveyor belt of short-term contracts trundles on, the struggles of gig economy ‘modern slavery’ are relayed in frank detail: the volatile shift patterns that shunt his body clock out of kilter and turn him and his wife into ships in the night; the hours of physical slog that leave him ‘drunk from exhaustion’ and his body ‘in tatters’; the weekly bout of ‘Sunday-itis’ that taints his twenty-four-hour weekend with the knowledge that the factory looms again the next day. The unrelenting monotony.

Given the extensive and legitimate grounds for pessimism, in a windowless ‘world of nights’ driven by the same machinal gestures, this could so easily be a joyless diatribe. And yet … Taking his cue from a Claudel parable, which reminds him that job satisfaction is in the eye of the beholder, Ponthus gleans contentment from the unlikeliest sources:

going out to the bins

There are other chinks of light too. Belting out Charles Trenet songs on the factory floor. Stuffing down pilfered prawns when the boss isn’t looking. The ‘childlike joy’ of sucking on lollies brought to mark colleagues’ birthdays. Stocking up on cut-price steak from the abattoir supermarket – ‘so good [it’ll] make you wanna kiss the Holy Virgin’s arse’. Against the ambient gloom, their glow is magnified:

‘Scraps of insignificance that take on meaning and

beauty in the grand totality the great nothingness of

And then there’s the ‘time to think’ – both about the people and places of his past, and the story in the making. The factory might be ‘consuming’ Ponthus and his workmates, but it simultaneously kindles a ‘need to write’ that gives life to the book in front of us. In the closing chapters, Ponthus rues ‘all those lines I didn’t write’, all the ‘Alexandrines to match those of Victor Hugo’ that formed in his mind during the working day, only to vanish by the time he got home to type them. Yet the free verse that flowed instead, unpunctuated except for line breaks to reflect the production cycle that never truly stops, is as memorable as any rhyming metre. It’s also profoundly human.

Tragically, Ponthus died of cancer in February 2021, aged just forty-two. On the Line is a lasting gift to the French – and now the English – literary landscape. You don’t need to be a poetry aficionado to be stirred by the understated beauty of Ponthus’s writing, and Stephanie Smee’s superb translation, nor to be moved by the world that Ponthus paints and probes. A world in which the vicissitudes of factory life are illuminated with wit and wisdom, and joy can be found twinkling where you least expect it.

On the Line by Joseph Ponthus