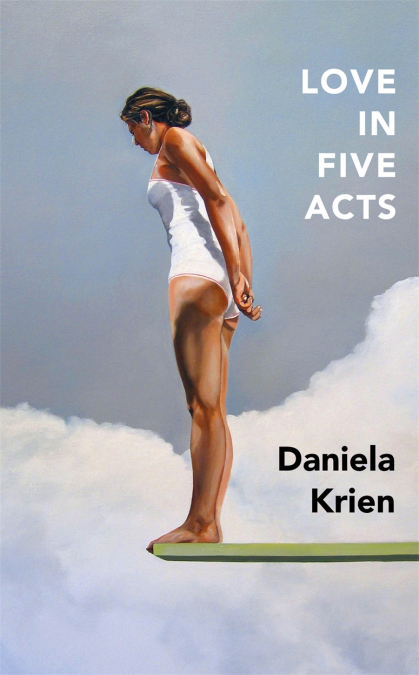 According to the ‘six degrees of separation’ concept, take any two individuals on the planet, and within six hops along their chain of acquaintances you’ll be able to trace your way from A to B. In Girl, Woman, Other, Bernardine Evaristo used this device to navigate a twelve-strong cast of contemporary British women. In Love in Five Acts Daniela Krien shows how it’s done German style, through the entangled lives of five women in modern-day Leipzig and Berlin.

The five ‘acts’ in Krien’s narrative acquaint us, respectively, with Paula, Judith, Brida, Malika and Jorinde. In some cases the links between the female leads are straightforward. In others they come to light more gradually, and in unexpected ways. Part of the pleasure of this book is teasing out this web of connections.

Deftly brought to life in English by Jamie Bulloch, Krien’s novel is a clever and thought-provoking exploration of the connections that bind us. Yet, as we plunge deeper into each woman’s story, it becomes clear that each act is as much about the tectonic shifts in daily life that conspire to push us apart. All five central characters are, in different ways, sifting through the rubble of failed relationships and trying to make sense of the events that led to their collapse. The book does feature the odd earth-shattering tremor but its real strength is in its depiction of the stealthy micro-quakes that combine, over a much longer period of time, to bring things crashing down.

These serial shocks and aftershocks are recounted in the third person, but the effect is akin to that of the first person. For the duration of each act, we inhabit the intimate corners of the spotlighted woman’s world, and follow her as time oscillates between the present day and assorted episodes from her past. These snippets of events, conversations and sensations are presented in brief passages, like scenes in a play whose collective significance only emerges in retrospect. The interiority of the novel is accentuated by the absence of formal dialogue; instead, snatches of other characters’ speech are italicised and embedded in the narrative, like second-hand echoes that have become the mental property of the focus character.

Narrative distance from her characters is not Krien’s style, at least not in the traditional sense. The closest we come to a panoramic view is when we re-view a character and or event from a different angle in a later chapter – often with flickers of dramatic irony. With each of these shifts in perspective, time creeps subtly forwards too. Though much of each chapter is given over to episodes from the past, when the narrative does jump to the present day and characters from earlier acts resurface, we realise this is not the present of a previous chapter. While our attention was riveted elsewhere, the protagonists’ lives have moved on, and the reader can only speculate as to what exactly has gone on while they weren’t looking.

Time does not stand still, Krien repeatedly seems to be reminding us, and nor do people – even if each of us carries the past as an eternal present inside us. Perhaps for this reason, I came away from the novel without a true sense of resolution, though this isn’t necessarily a criticism. My lingering sense of anticipation, like the cover image of the diver teetering on the edge of the board, appears very much in keeping with the book’s message: until the final curtain falls, we’re all actors in a play that is ever evolving, each new scene channelling the great act of human existence in directions we can’t yet know.

Rosie Eyre is a translator from French and Spanish. She has just completed a six-month literary translation mentorship with Sarah Ardizzone, as 2020-21 winner of the National Centre for Writing’s Emerging Translator programme for Swiss French. She is now working on her first published book translation, due to appear in late 2021. Rosie is delighted to have assumed full ELNet-Riveter status earlier this month, and looks forward to her continuing work in the role of Editorial Assistant.