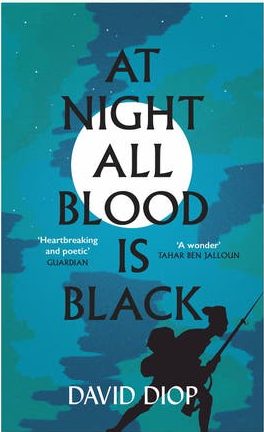 #RivetingReviews: Rosie Eyre reviews AT NIGHT ALL BLOOD IS BLACK by David Diop

Diop says he was inspired to write this novel – now shortlisted for the International Booker Prize – after reading a collection of letters from France’s ‘Poilus’ (‘the hairy ones’), the affectionate term for the troops who fought for France in the First World War. But the collection had a conspicuous gap. For all his searching, Diop could not find a single letter from the colonial ranks of the Tirailleurs sénégalais (‘Senegalese riflemen’). No small silence, for a regiment that recruited almost 200,000 men from Senegal and French colonies across West Africa. Over the course of the war, 30,000 of them lost their lives.

In At Night All Blood is Black, sublimely translated by Anna Moschovakis, Diop imagines one of these missing soldier’s voices. It belongs to Alfa Ndiaye, the son of a peasant farmer and shepherd’s daughter from the Senegalese village of Gandiol. Brawny Alfa is convinced to enlist by his studious ‘more-than-brother’, Mademba Diop, whose ‘white school’ education has ‘put it into his head that he should save the motherland’.

When we meet Alfa at the start of the book, Mademba has long since been reduced to ‘a heap of dead meat’ on the French battlefields, and Alfa is swept up in a maelstrom of loss and guilt. The novel opens with an ellipsis. This marks a fleeting respite before Diop pitches us – head-first and mid-thought – into Alfa’s whorling stream of consciousness. I’m not sure I breathed again for the next two hours.

This young soldier’s inner world is a snarl of double meanings. ‘God’s truth, each thing carries its opposite within’, Alfa believes. This principle propels the narrative along as we retrace the events that preceded Mademba’s death, then follow Alfa’s descent into a warped spiral of atonement. Mademba, we learn, was killed by an enemy bayonet to the stomach, after Alfa’s teasing drove him to race first out of the trenches. When Alfa caught up with his dying friend, Mademba begged Alfa three times to put him out of his misery. Each time Alfa refused.

Innocent banter or a murderous goad? Natural obedience to the ‘laws of humanity’, or an ‘inhuman’ refusal to grant Mademba’s last request? Haunted by these jockeying co-truths, Alfa is compelled to redirect the scene of Mademba’s death – and to claw back his own humanity in the process.

What ensues is a perverse kind of Groundhog Day. Eight times over, Alfa creeps behind enemy lines after battle, handpicks a German soldier to eviscerate, and slits the victim’s throat in what he sees as a redemptive act of mercy: ‘what I didn’t do for Mademba Diop, I do for my blue-eyed enemy. Out of my reclaimed humanity.’ On each occasion, Alfa returns with his victim’s right hand as a ‘trophy’.

At first, Alfa’s exploits win him plaudits from his comrades and superiors. In a French army where colonial troops are explicitly instructed to ‘play the savage’ (a detail rooted in real-life propaganda from the period), Alfa seems to be enacting his role consummately. But as his hand collection grows, so too does the fear within his own ranks. Alfa’s performance is too convincing, ‘a little too savage’, as his Captain puts it.

Alfa is banished to the rear for a month. In the military hospital, under the gaze of Doctor François, he is encouraged to purge the ‘filth of war’ from his mindby drawing images from his past. This less historically grounded (yet fictionally compelling) plot device casts Alfa’s thoughts to his childhood and adolescence in Senegal. Having known Alfa only as a soldier, we now meet him in a new light – as the nine-year-old boy scarred by the departure of his mother, and adopted by Mademba’s family to help him ‘forget the gnawing pain’; as a teenager smitten with the off-limits daughter of the village chief, finally losing his virginity to her the night before he leaves for war.

Yet, while art therapy offers Alfa a tentative outlet, the reopening of old wounds floods him with a fresh crisis of double meaning. As the memory of the pre-war, living Mademba is revived in Alfa’s head, it is his voice that surges from the stream of consciousness in the closing chapters, and seizes the reins of Alfa’s ‘wrestler’s body’.

A textbook case of dissociative disorder? Or the ultimate act of self-sacrifice by a young man driven out of his mind by the need to expiate his human failings? Diop leaves us to grapple with that one.

AT NIGHT ALL BLOOD IS BLACK

Translated from French by Anna Moschovakis

Shortlisted for the International Booker Prize 2021