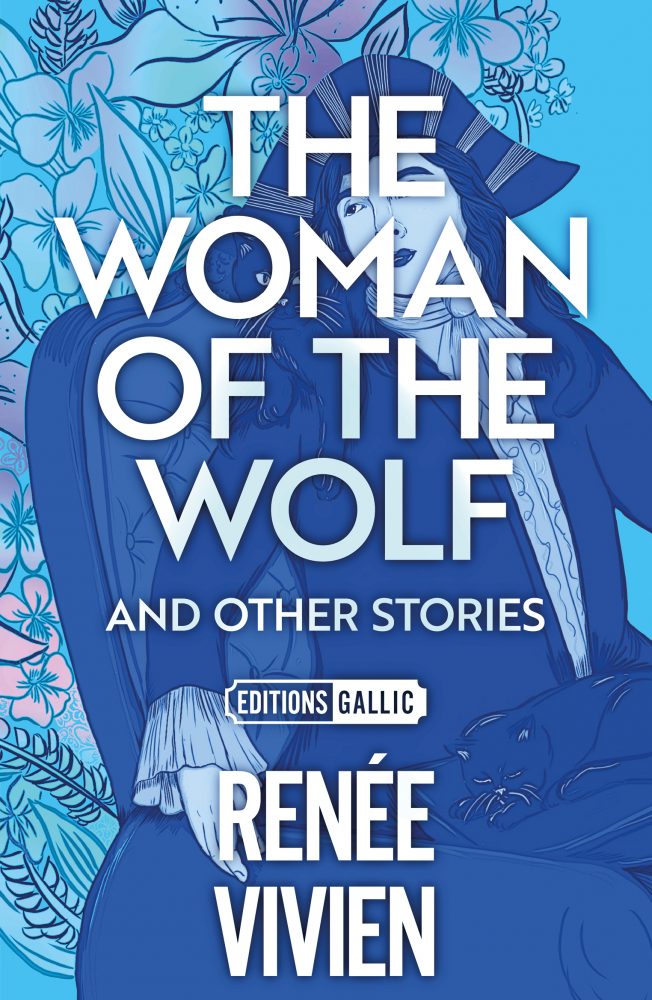 #RivetingReviews: Rosie Eyre reviews THE WOMAN OF THE WOLF AND OTHER STORIES by Renée Vivien

The Woman of the Wolf and Other Stories is the first title in Gallic Books’ new ‘Revolutionary Women’ list, launched last month ‘to celebrate French and Francophone women writers who have been overlooked, and to restore these entertaining and inspiring voices to their rightful place in the canon’. Encapsulating her canon credentials, Renée Vivien kicks things off with a bang in this explosive 1904 short-story collection.

Evocatively translated by Karla Jay and Yvonne M. Klein, the collection features seventeen prose tales and poems, set against a rainbow of backdrops and time periods. None of the pieces are longer than ten pages – and some span barely two. But this whistle-stop ride through Renaissance Italy, Biblical Persia and Ancient Greece (hopscotching via flaming Wild West prairies, crocodile-infested deserts, once-upon-a-time Budapest and the hellish underbelly of eighteenth-century Glasgow) is no frivolous jaunt. Like Vivien herself, the book’s slim stature belies meaty concerns – and the motley scenery and tall plotlines ferry a concerted critique of real-world gender relations.

The collection takes its name from the opening story, narrated by a bombastic Parisian socialite, who recounts his failed attempts to seduce a wolf-flanked woman on board a sinking ship. But it could as easily have been called ‘She’s Just Not That into You’. That’s the defiant message that pervades Vivien’s prose – a world in which male desire is depicted as a toxic force, and the courtly game of cat and mouse is turned on its head by women resolved to evade their predators at all cost.

Intriguingly, given the feminist thrust of Vivien’s writing, around half of the stories are voiced by male narrators – but this even-handed distribution of storytelling power doesn’t work in their favour. Instead, these men take the stand to give their witness testimonies … and land up putting themselves in the dock. Take Giuseppe Bianchini, the prison escapee narrator of ‘The Cruelty of Gemstones’, whose grumblings against his ‘implacable’ mistress (the eponymous Madonna Gemma) frame the account of how he raped and strangled his jailer’s semi-conscious wife. Or Blue Dirk, narrator of ‘Forest Betrayal’, who professes bafflement at his nickname of ‘Forest Devil’ – then promptly exposes himself as a woman-beating child molester (with the disclaimer that his actions came after a month of being ‘terribly’ sex-deprived). By the time the female narrator of ‘Bona Dea’rejects men as ‘ferocious and brutal’ and vows to love women instead, it’s hard to quibble, based on the prior evidence.

As the pendulum swings from male toxicity to female empowerment, elsewhere men figure as redundant sidekicks to fearless women, reduced to silently seething at their comparative ineptitude. But these swashbuckling narratives – together with the lyrical sprinkling of Sapphic utopias – struggle to shake off the accusatory shadow haunting the collection. Vivien’s female protagonists may demonstrate staunch independence in several of the tales – but this is as much a book about men as it is about women. And in the age of #MeToo, over a century on it can’t help but seem chillingly resonant.

THE WOMAN OF THE WOLF AND OTHER STORIES

Rosie Eyre is an MA graduate and early-career literary translator from French and Spanish, winner of the National Centre for Writing’s Emerging Translator Mentorship 2020-21 for Swiss French. Currently working under the mentorship of Sarah Ardizzone, she has recently joined ELN’s Riveting team until summer 2021.