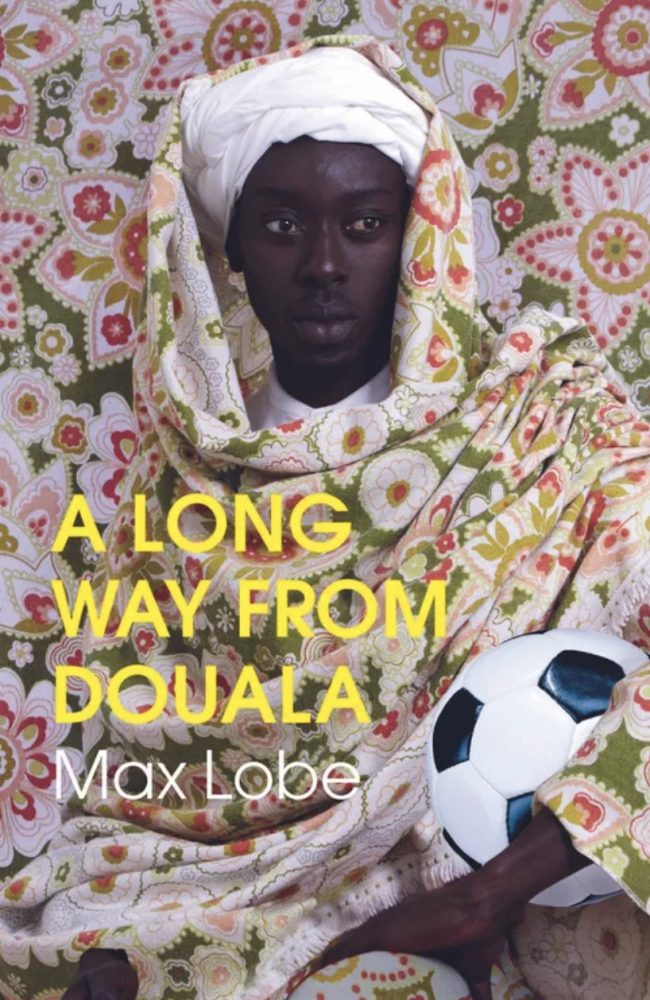 Over the past decade, Max Lobe has emerged as a name to watch in contemporary Swiss literature. Since moving to Switzerland as a student and publishing his first novel in 2011, the Cameroon-born author has notched up six books and won multiple prizes for his topical, rip-roaring explorations of life, society and politics in both his birth and adopted countries. A Long Way from Douala is his fifth novel, and the first to appear in English courtesy of Ros Schwartz’s superb translation.

In Lobe’s words, his previous novels have had ‘one foot’ in Cameroon and ‘one foot’ in Switzerland – inspired by his personal experiences of growing up in late twentieth-century Cameroon and living as a gay, black man in twenty-first-century Swiss society. Not so with A Long Way from Douala, which has both feet planted in modern-day Cameroon – even if the heart of the tale is one young man’s desire to hotfoot it out of the country to ‘the bright lights of Europe’.

The young man in question is Roger, who dreams of swapping his miserable home life in the southern city of Douala for football stardom in Spain’s La Liga. One morning, following a fight with his younger brother, Jean, Roger sets off north, intent on making this dream a reality. Jean is warned off soliciting help from the ‘corrupt gang’ that is the Cameroonian police, so the guilt-stricken teenager instead calls his and Roger’s ‘brother-from-another-mother’, Simon, who suggests the pair go in search of Roger themselves.

The story is narrated from Jean’s perspective, as he and Simon journey across Cameroon in a bid to bring Roger home. En route, the novel weaves between the interior perspective of the sexually confused young narrator, and the macro view of a country in turmoil despites its vibrant culture and idyllic landscapes. While Jean wrestles with his nascent feelings towards his older travel companion, Cameroon is waking up to daily news of Boko Haram attacks and jostling with endemic corruption. And in turn – as Simon muses towards the end of the novel – a lost generation is fleeing across the Nigerian border in pursuit of a better life:

‘Since we left Douala, you’ve seen with your own eyes how beautiful the country is, how rich. […] but even so, people prefer to go, even if they have to die on the way’

Despite the weighty backdrop of Islamist terrorism, mass migration, and rotten state institutions, the novel wears it lightly. Even when the mounting terrorist threat forces the introduction of nationwide military searches for travellers, events take a comic turn when the suspect package carried by one of Jean and Simon’s fellow passengers turns out to be the man’s own, rather princely, ‘plantain’.

Lobe also dispels the notion of any universal ‘migrant narrative’. While Roger may weave the same path north as countless ‘bozayers’ – the term popularly used to refer to West African migrants attempting to reach Europe – his reasons for doing so are personal. If his home life is unhappy, it’s not the result of economic hardship or militia violence, but of an abusive mother who ‘beats him black and blue’ and conspicuously prefers his brother’s academic credentials over his sporting talent.

The book’s quest to delve into the individual backstories of Roger, Jean and Simon – plus Roger and Jean’s force-of-nature, fanatical Christian mother and boozehound, beer company boss late father – while mining the broader social, political and religious terrain of Cameroonian society, is a hefty undertaking for such a slim novel. At times, it feels like the book is trying to cram a 20kg suitcase into an overhead locker and would carry more punch if there had been a tighter focus – or, simply, if Lobe had made the trip less whistle-stop. There’s a lot to like about his straight-talking prose and sparky, Camfranglais-sprinkled dialogues, and I’d happily have stayed on board for longer.

A LONG WAY FROM DOUALA

Translated from French by Ros Schwartz

Rosie Eyre is an MA graduate and early-career literary translator from French and Spanish, winner of the National Centre for Writing’s Emerging Translator Mentorship 2020-21 for Swiss French. Currently working under the mentorship of Sarah Ardizzone, she joined ELN’s Riveting team at the end of last year.