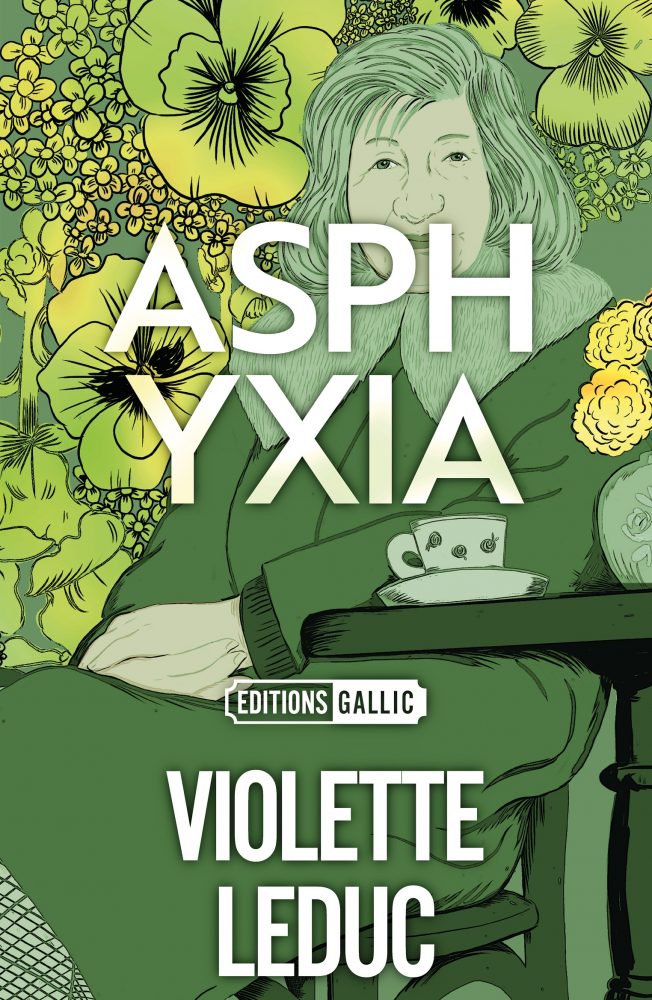 In her celebrated 1964 memoir La Bâtarde, Violette Leduc recounts the genesis of her first novel, at the instigation of her friend and weary confidant, the writer Maurice Sachs:

‘Your unhappy childhood is beginning to bore me to distraction. This afternoon you will take your basket, a pen, and an exercise book, and you will go and sit under an apple tree. Then you will write down all the things you tell me.’

Leduc obeys, and Asphyxia is born.

To describe Asphyxia as the textual portrait of an ‘unhappy childhood’ would be a fair synopsis – in part. But fittingly for a book that started life beneath branches ‘laden with green and pink apples’, Asphyxia offers a colourfully quirky slant on what could be a monochrome tale of woe. In the novel, as in Leduc’s own childhood, the root of the fictional narrator’s unhappiness is her ice-cold mother, who remains branded by the ‘sin’ of falling pregnant by her employers’ son while working as a domestic servant on the wealthy side of town. Unfortunately for the narrator, she is the living reminder of the ‘ball and chain’ her mother has carried ever since – and in early twentieth-century rural France, that is no small burden. It’s hard to quantify how much affection a proper name can convey until such a name is denied. In the ‘blue and hard’ eyes of her mother – who appears to have spurned a book of baby names in favour of a thesaurus of invectives – the nameless narrator is simply an ‘idiot’, ‘monster’, ‘brat’, ‘beast’ and ‘halfwit’. For a woman who spends her days reading How to Stay Beautiful her daughter is a reputational blemish. Even when the narrator is pushed into the park pond, her misfortune becomes just another assault on her mother’s pretensions of elegance: ‘she knows how I dislike having attention drawn to me…’

The depiction of maternal rejection, relayed through assorted episodes from the narrator’s childhood, is stingingly poignant – and if the narrative consisted entirely of these, it would make for bleak reading. However, the stranglehold of physical and emotional cruelty is relieved by two elements that provide vital breaths of colour. The first of these is the narrator’s beloved grandmother; the second is her own indefatigable imagination. In La Bâtarde, Leduc recalls her delight at becoming, in the act of writing Asphyxia, ‘the creator of my grandmother whom I adored, of my grandmother who adored me’. This mutual adoration is evoked in tender detail at multiple junctures in the novel, often through the medium of food. If the narrator’s mother is the rotten apple of the piece, souring domestic life with her moods and rages, she clearly fell a long way from the tree – the chiaro to her daughter’s oscuro, Leduc’s fictionalised grandmother is a bastion of affection (and enticing confection), soothing the effects of maternal bile with anisette-dipped sugar lumps and a sympathetic ear.

Of course, hanging salvation on a lone kindly presence is a risky business – particularly in a period shadowed by the threat of consumption. However, as asphyxia of the literal kind tightens its grip on the narrator’s grandmother, respite from the maternal ‘iron corset’ (for both reader and narrator) is to be found in the curious spectacle of everyday village life. Away from the narrator’s oppressive home environment, the novel features a patchwork of exuberantly rendered memories of provincial scenes and inhabitants. Under her young gaze, the mundane is imbued with a transportive strangeness: a doll broken in a street scuffle is a ‘headless corpse’, the arms of the formidable village coal merchant are ‘two sub-thighs’. The metaphor-rich description can be oblique in places, particularly as the self-contained nature of each chapter offers little in the way of context. As a result, reading Leduc sometimes feels like doing a jigsaw without the box – but slotting together the picture is a pleasure in itself.

Some books are easily read in one sitting. Asphyxia requests to be savoured. For a novel that sprouted from unhappy home truths, there can be no fairy-tale ending. But by relishing the variegated shades of Leduc’s writing, there is much joy to be had along the way.

Translated from French by Derek Coltman

Rosie Eyre is an MA graduate and early-career literary translator from French and Spanish, winner of the National Centre for Writing’s Emerging Translator Mentorship 2020-21 for Swiss French. Currently working under the mentorship of Sarah Ardizzone, she has recently joined ELN’s Riveting team until summer 2021.