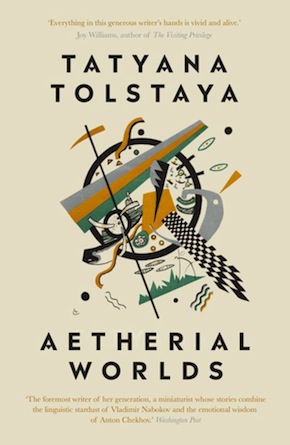 Tatyana Tolstaya lives a double life. A fiercely postmodern, vibrant writer of the here-and-now, an indulgently larger-than-life presence in Russian letters and culture at home and abroad, she is also a ghost – a rather hard-to-miss, palpably material ghost, but a ghost of Russian and Tolstoyan past, nonetheless. Her latest collection of short stories is many things, some splendid, some less so, yet it is above all a cri de cœur that Russia, eternal, magical, mythologised, barbaric or mystical, has not died – and that we should all yearn to go and live there, be Russian, feel, think, dream and envision the world and its essence in its untranslatable words and concepts, through its sublime or terrible images.

Aetherial Worlds begins with a story about Tolstaya’s grandfather, Alexei Tolstoy, whose longing to imagine things and the worlds they might inhabit prevented him from becoming a formula-seeking engineer. He became a writer of historical novels and science fiction instead, and of a famous Russian adaptation of Pinocchio. Although Tolstaya does not tell us so, he was also a rather controversial figure, earning the nickname the Comrade Count, and producing a healthy (or unsavoury) corpus of writings in support of the official, pan-Slavic party line. Tolstaya has said that she cannot judge him, since the historical circumstances decreed a different kind of ethics and aesthetics.

Alexei Tolstoy’s ‘ability to daydream’, and that of Leo undoubtedly as well, ‘was passed on to me, although not to the same extent. I didn’t start out a writer and had no plans of becoming one. Although I happily swam in imaginary expanses, I had no words to describe them.’ Blindness caused by an eye operation to correct short-sightedness would lead to mental images that could only be captured if the words were right. Lack of sight, Tolstaya tells us in what is a quasi-parable of what makes a writer into a true craftsman of their art, led to verbal, narrative and socio-philosophical insight. It is a power that is almost equal to a certain omnipotence in her case, to a persona that is charmingly egocentric and almost oblivious to the effect that her particular point of view, actions, choices and desires, and the means of satisfying them, may have on others. It is also an inherited divine gift that has an aura of old-fashioned feudalism about it, both highly objectionable and irresistibly endearing, somewhat shocking and ultimately harmless. Tolstaya’s mode and style has a humorous, acerbic eccentricity, it is a solipsistic shaft of light that falls relentlessly on herself and others, on society at large, like a Röntgen X-ray. Lies and truths, alternative facts and creative ambiguities are all shown in stark relief without discrimination, and with an equal measure of whimsical, penetrating scepticism.

The past and its remembrance, the possession of the material objects, or the human experiences and stories that can lead to it and guarantee its survival and vital legacy, are what seem to be at stake in Aetherial Worlds – the title perhaps referring not only to the precariousness of fiction, to the corrosive processes of time and a failing culture that are the key elements of the eponymous story, but also to a celestial reality only accessible through an empirical attachment to history, genealogy, oldness and the infinity of older values.

Aetherial Worlds gives voice, a startling or disturbing presence, to animate and inanimate worlds of spirits, human or supernatural, endowed with what Goethe called ‘the open secret’, and Tolstaya is the mystic guide or rambunctious Shakespearean fool holding both map and key to ‘the colour of sighs and murmurs, of white nights, whispers and otherworldly emotions’. It is a quirky, self-willed type of magic realism, that is unpredictable and carefully directed.

Often compared to Turgenev, Gogol or Chekhov, her style here is closer to that of radical Soviet writing and pre-regime Bulgakov, to Vera Panova’s lyrical scenes of Soviet life and her sedately subversive high camp, and George Perec’s obsessively material, immaterial indexes of the minutiae, trivia and sine qua nons of life. It is a tongue-in-cheek blend of surrealism and pragmatism, of essayistic writing and grassroots storytelling, producing a narrative that is an alloy of free-flowing associations and unabashedly ipse dixit pronouncements.

We get a sparkling panorama of pre- and post-Glasnost Russia, of the labyrinths of the Soviet era (Minotaurs and Ariadnes included in lavish detail), and the meandering mazes of what came after. A pre-revolutionary vis comica and resignation meet fragmentary, entropic modernity – in Tolstaya’s worlds, an older, dreamy domain of dachas, landed gentry and city aristocracy coexists nebulously, uncomfortably, seamlessly with more recent nightmares, white nights of extinguished vision, and Soviet bureaucracy and nightmare.

At their best, the stories in Aetherial Worlds are a virtuosic display of an indomitable, often ruthless critical power and wit. Many of the stories are unrefined gems or outright jewels – ‘The Invisible Maiden’ being one such example. Some, however, are quite simply juvenilia that perhaps ought not to have been included. The last story, ‘See the Reverse’, is exquisite in its fine balance between idiosyncrasy and immediacy, between a highly individual narrative vernacular and an ecumenical language and significance. It is the apex of the turmoil of this collection, the climax and true celestial, aethereal vision, and it is perhaps worth persevering through much that is mere distraction in order to reach this haven of, quite simply put, true wisdom.