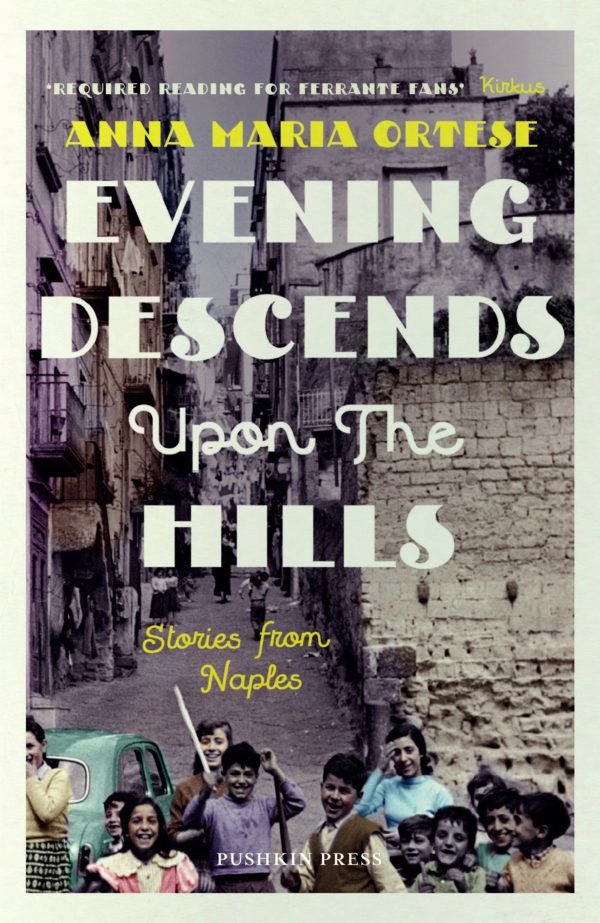 Anna Maria Ortese’s Evening Descends Upon the Hills is a book that, Atlas-like, seems to bear on its shoulders the weight of the most overwhelming human sorrow – but also the burden of humanity’s ‘small, wretched acts of violence, an abyss of voices and events, tiny terrible gestures’, the unspeakable social stains and realities to which Ortese gives voice and discourse, and that Elena Ferrante said gave her writing its sense of direction.

A protean collection of short stories, reportage pieces and very intimate cameos of Naples’ ‘pure Marxist’ intelligentsia, each section is ineluctably and inextricably linked to the others, fiction being the catalyst for realities one cannot otherwise encompass or confront, enunciate or internalise, while reality provides the ultimate reason to be in a world that seems to forbid and abort all existence.

Whether writing fiction or factual narrative, Ortese gives us a very raw, neo-realist account of Naples, a daring endeavour of sincerity that cost her considerable criticism and even personal trauma as a writer. Her powers as a storyteller are substantial, and she deploys them without constraint, conjuring before our eyes worlds of almost unfathomable bathos, from which some readers may struggle to emerge:

‘amorphous poverty, silent as a spider, unravelling and then reweaving in its fashion those wretched fabrics, entangling the lowest levels of the populace which here reigned supreme. It was extraordinary to think how, instead of declining or stagnating, the population grew, and, increasing, became even more lifeless, causing drastic confusion for the local government’s convictions, while the hearts of the clergy were swollen with a strange pride and even stranger hope. Here Naples was not bathed by the sea.’

Fickle, facile reading of her pages could result in a sense that she is almost inhumanly harsh, senselessly exhaustive in her inventories of misery and cunning, usury and depravity, deformity, debasement. What Ortese seeks instead is to provoke in us a responsiveness to the tragedy close at hand, to the historical drama at our doorstep, that we more comfortably reserve for human lives that are too distant in space or time.

Ortese is a social anthropologist, a cultural historian, a documentarist, but also a kind of confessor, listening to every frequency of human wretchedness and pain, able to withstand, as an emotional filter and recipient, almost every shock of human tragedy. Hers is a disembodied voice, being lent to the service of so many voiceless existences. She is invisible in order to reveal – even if there seems to be no revelation, no vision, anywhere. One can almost see her walking, with her very particular dignity and presence, in the alleys of Naples and through the crowds of discarded humanity; she chronicles, with a luminosity that must have clashed beyond bearing with the surrounding squalor and darkness, giving us at least a sense of hoped-for illumination. She uses words the way others of her generation – Capa, Kalischer, Kertesz – used a camera to capture the moment humanity collapses but also shines in its trauma and fragility.

Ortese’s writing has something intensely obsessive, unavoidable – a compulsion to look closely at what repels and horrifies one most strongly, a sense of inescapable destiny and fatality. Human portraits melt into dire urban landscapes and fade into social termini. She is a writer full of sharp angles, acidic aftertastes and ambiguities, a painter of words whose palette has developed a propensity for hues of morbid sepias contrasted by cerulean azures or emerald greens. She evinces ineluctable clarity and an almost ectoplasmic writerly presence, as if her texts were composed in and transmitted from some distant, immaculate and otherworldly dimension.

And yet every word and image cannot but strike a vital, deep, intimate chord; read her with audacity and trepidation; follow her as though on a pilgrimage; she will transport you to a world where language and narrative can reclaim their crucial urgency and value.

EVENING DESCENDS UPON THE HILLS

Translated from the Italian by Ann Goldstein and Jenny McPhee