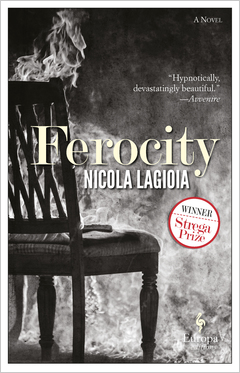 Nicola Lagioia’s Ferocity claims to belong to a counter-tradition of fiction as an anti-story, of narratives transcending and transgressing the boundaries of authorship and readership, of perception, consciousness and plotline. Rawness and the exposure of humanity in its starkest nakedness are Lagioia’s aims throughout his four novels so far, and his process of choice is slowness rather than speed: it takes time, he says, to set alight my most explosive urgencies and my deepest needs. What I most desire to discover is what I most fear to bring to light. A writer’s profession has always seemed to me to be a middle way between the work of a scientist and an exorcist. It’s a way to deal with what he has called “private demons”: how to reconcile the technicalities of life with the emotional drama of a humanity in crisis.

In Ferocity, Lagioia has spared us none of the elements of a certain type of high drama: Dynasty-type wealth and ambition, neo-realist analysis of social provenance and resulting ruthlessness and decadence, Studio 54 glamour and sinister fatality, with glimpses of economic crisis, social dissolution, and a landscape where the aspirations of property moguls clash with pioneering progress in cancer research, environmental concerns, the darkest objectification of women, and the most desperate trajectories of self-destruction in men.

Ferocity reads like a meticulously cinematic film-noir thriller, where the lustre of technique and the genuineness of inspiration fuse and are intended to collaborate. The natural underworld, the microcosm of insects, invertebrate and urban scavengers, is used explicitly and emphatically as a foil for human insignificance, angst and ultimately bestiality, in this densely woven tapestry of dark aestheticism, decadence and the ultimate inexorableness of existence. There is a compulsive density of detail and of verbalised thought, of scenes employed to convey the highly intricate, burdened triviality of that side of an illusory paradise. Decomposition in Lagioia’s hands becomes the artifice to convey very real social collapse, of a humanity neurotically overwhelmed by narcissism.

Ferocity is consumerism consumed, ambition as an ouroboric monster turned upon itself, eating its own tail. Lagioia’s novel aims to produce a crescendo of increasingly sad perversions, to be open. Exhilarating. Useful. Friendly. Superficial. Pornographic. Bloody. Within the fiction of the novel (but one suspects also in our experience as readers), our enthralment with death and darkness, with the morbid and the obscene, replaces meaningfulness and empathy, as though proximity to the macabre and the traumatic creates an even greater distance from human reality.

Ferocity is lavishly louche and staggeringly macabre, pushing its brief with relentlessness and a dismissal of the limits of both truth and fiction. It is an incestuous flirtation with death and life, a highly polished attempt at a vanitas, where the reminder of mortality is heavily hued by a sardonic self-indulgence in the ghoulish, in the exposé of affluence and of a life that is presented to us as the eiptome of what lies beyond the mundane and ordinary. Ultimately, lamentably, the characters, for all their potential for horror, seem unable to break free from the stereotypes of a lesser reality and fiction. The explicit or hinted deviancy, instability and perversion, the emotional handicap pervading every layer and molecule of being, do not lead to a genuine sense of tragedy – there is no contrast, no loss, no lament or even failed atonement. The plea for salvation – the salve mi of the family name at the centre of the novel, remains unfulfilled, unresponsive, an echo in a vacuum, if that were possible. And perhaps ominously, the motto of it all, as a White Queen might say, is a final snippet of philosophical dialectics: “Do you know what scientific discipline best explains the new century? … Ethology. Animal behaviour.” “We are not animals,” one of the main characters objects. “We are strange things.”

Perhaps both statements have their modicum of truth. Even as our greatest virtue is the simplicity of our humanity, we still insist on testing the limits of our id, the animal archetypes that we may or may not carry, our strangeness, which we proffer as a substitute to critical distance. Ferocity is of epic proportions, yet it relies for its effect, for its effectiveness, on such feet of clay: a strangeness that undermines the traumas it evokes, the ghosts it conjures up from the dead, the echoes of humanity it seeks to amplify.