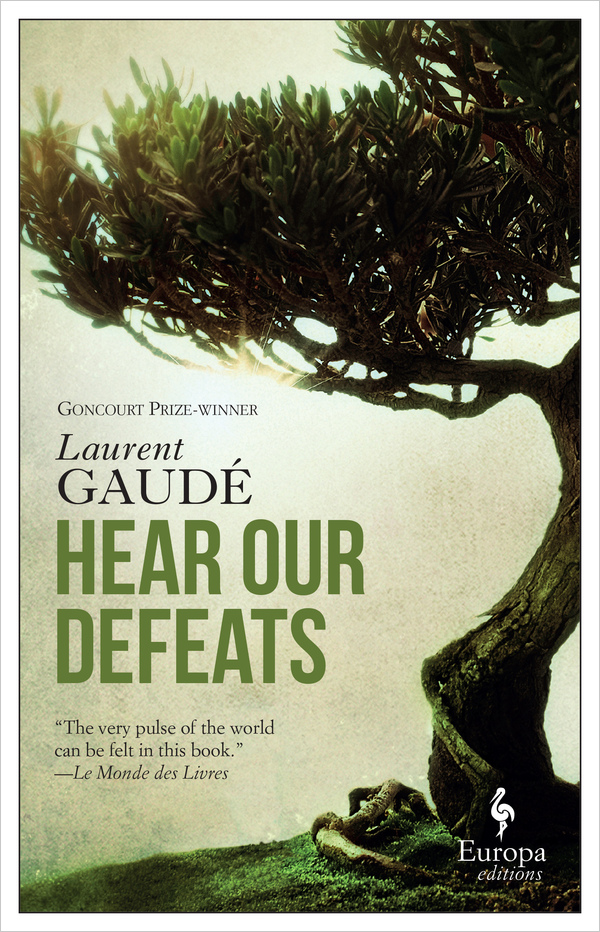 The subject of Laurent Gaudé’s novel Hear Our Defeats is the cultural catastrophe that accompanied the rise of Islamic State, leading to questions about ownership and about the right to a voice that is inherent in any discussion of the past, and about the material and spiritual legacy of a people.

Like the Alexandrian poet C.P Cavafy, Gaudé makes use of parallel strata and of multifocal vision, of Socratic questions and of suspended answers in his search for a genuine, if literally dying, humanity. Above all, he seems to ask, is wisdom the total sum of accumulated experiences and recollections? In long, echoing sentences that create a sense of atemporality, spacelessness or even of a state beyond humanity, Gaudé sabotages readerly expectations and plays wry, ironic games with our assumptions and misconceptions; with our range of vision and the depth of our blindness. The two central voices attempting to penetrate into, peregrinate through and re-emerge from a world that is rapidly disappearing in the most harrowing way, are like tango dancers: one tracing the steps of a dance of death, while the other is seeking a choreography that will take them out of death and into life. On a personal level this is a confrontation with aloneness and mortality, and on that of an archaeologist this is a quest to bring the past back to life, to prevent the annihilation of history, civilisation, and mankind, the very substance of humanity.

Gaudé uses four narrative planes and reflectors of experience: the daemonic devolution in the territories under current or prior ISIS control; the Abyssinian Campaign through the eyes of Haile Selassie – to filter the inscrutability of Western intentions and actions (in particular the rather perfidious Graziani); Hannibal and his plan to expose Rome to its allies; and the American Civil War, through the prism of Grant’s narrative and the sotto voce commentary of his friend Mark Twain. The point is that everyone knows about events, but few seek to understand their meaning. For Gaudé, this meaning is encapsulated in the realisation that no war is truly won, since the loss can never be undone, or even remedied.

Hear Our Defeats is a lament on the irrationality and totality of violence, on the zero-ness that obliterates infinity; or, at least, this would seem to be the presumption of the jihadists, the fanatics, the alt-whichever-way militants, for whom material extermination and spiritual terrorisation appear to be the omnipotent means to domination. Human, mortal lives that are ruthlessly massacred are pitted not against but alongside monuments to and beyond time and their demolition.

The book is both complex and simple. It is a love story, a spy thriller, a war drama and a docu-essay about the dustiness and nebulousness of every side and aspect of a particular historical narrative. There seem to be skeletons and dirty secrets everywhere, angels and demons, trauma and lyricism. Above all, nightmares and dreams. There is often a sense that, as Gaudé argues against the cultural appropriation of the past, he may be falling prey to his own caution or audacity. Yet he offers sharp takes on the cultural dispossession of the very notion of civilisation by ISIS, which feels entitled to decide whether the past should be pulverised; and similarly by the West, which presumes for itself the authority to judge to whom the past should belong and who should be appointed as its guardians and custodians.

Excellently translated by Alison Anderson, Hear Our Defeats will feel to some readers like a maze of a novel, made of thick layers of superimposed palimpsests, which, if anything, hurl them right into the midst of the darkness, senselessness, terror, pain and horror of all that it contains, as well as bringing them to a new juncture with the inextinguishable human need for hope.

What Gaudé does not want us to forget is that there is, after all, an important distinction: we should not wonder about where bin Laden’s remains are, or Gaddafi’s; yet we ought to care for ‘Alexander the Great’s, yes. Hannibal’s too. Because they had a vision, because those are the bodies of men who saw History abandon them, when they could have reigned over it, because they were men who brought down worlds and gave words to new worlds.’

Vacuous Julian had the following to say
About our religious belief: ‘I read, I understood,
I condemned.’ He thought we’d be devastated
by that ‘condemned’, the silly ass.
Witticisms like that don’t get by with us Christians.
Our quick reply: ‘You read but didn’t understand;
Had you understood, you wouldn’t have condemned.’