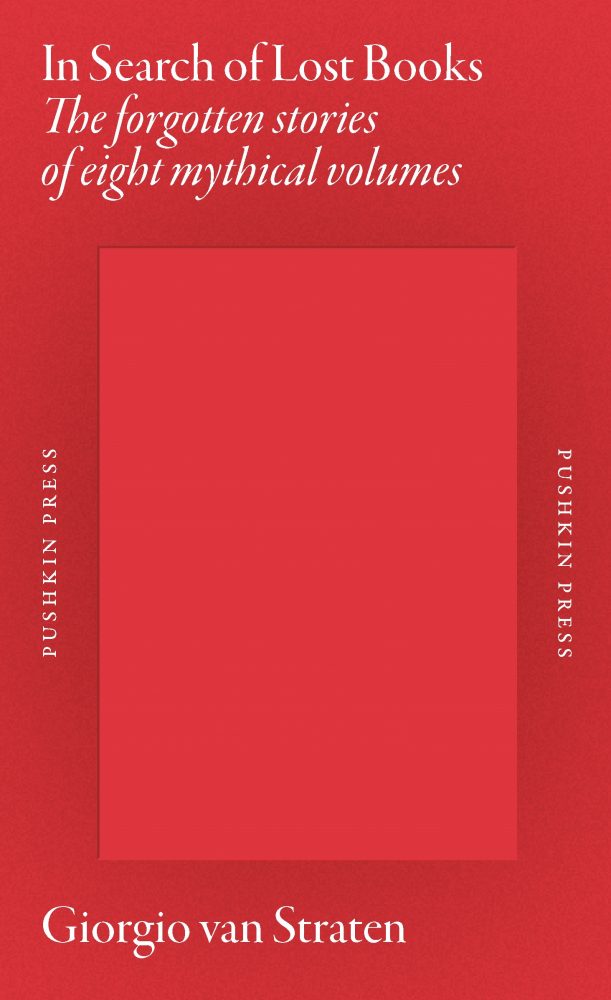 In this slim, rather beautiful book, with its conflagrated, scarlet binding, Giorgio van Straten treats us to a quiet firework display of vignettes on the theme of loss, suppression, destruction, forgetting, displacement, even murder. In Search of Lost Books is about the heart beat at the centre of literary production, about the minutiae of greatness (and the darkness or desolation that lies within), about the failing humanity that so often produces the most astonishing monuments to its cruciality and urgency.

Van Straten is an exceptional guide, whose cultural presence is by no means ethereal. He has written novels, plays and librettos, translated classics from English into Italian and he has written widely as a critic, as well as curating Italian culture both at home and abroad. It’s fair to say that he writes not only as a literary man, but as a host, a curator of words, history and stories, of literary lives. In Search of Lost Books presents a private view of lost masterpieces, a particularly eloquent, lightly philosophical display of select, exceptional absences.

Eight works by as many authors make his list: we follow in each case both writer and work as they proceed to disappear – through an act of self-destruction, loss, suppression, through enigma, suicide or murder. We learn of the activity behind publication or eradication, of the clashing tension that arises when art imitates life – or vice versa. Romano Bilenchi, Lord Byron and Sylvia Plath, for example, seek to interpret, find coherence in the destruction of manuscripts by others, left to decide the destiny of words after the voice of their writer was no longer there to speak another fate. Ernest Hemingway adds a whodunit note: a suitcase mysteriously disappears – or perhaps is stolen or spirited away to erase traces of inadequacy. Memory Is the Best Critic, the title of that chapter, reverberates almost sardonically, evoking Hemingway’s mastery but also musty darkness. Bruno Schulz and Walter Benjamin are perhaps the paradigms van Straten feels are closer to the crux of his subject, his quest, and perhaps all literary absence. Here we have murder and regeneration, tragedy and lives seen through the prism of fate – ill fate – and of a particularly rare and beautiful human purity. Nikolai Gogol, Malcolm Lowry and Sylvia Plath (again) will wrap things up: the time-honoured star quality of the poète maudit(e) is the centre of scrutiny, as well as of awe and admiration. The self-destructiveness of absolutes and of perfectionism, the abusive allure and aura of the doomed artist, the layers of troubled humanity behind an expurgated literary idol are quietly yet powerfully laid out in front of us, never eschewing the tragic vision. Van Straten often hints, through quotes, at paths we as readers are meant to follow. Perhaps his most staggering nudge in this direction is from Frieda Hughes’ 1997 poem Readers, written about her mother, Sylvia Plath.

Throughout this chronicle of loss – even perdition – van Straten remains hopeful. There is no absence, if there remains the memory of absence … If one no longer has land but has the memory of land, then one can make a map are words by Anne Michaels that he quotes early in his quest. And he concludes with a promise of possible discovery, with a pledge of patience, and with the confirmation of faith: perhaps somewhere, sometime, something will emerge, in a literary archive or stash still to be explored. In the age of paper and pen such optimism spurred the efforts of many, thanks to whom stories and maps have been not infrequently retrieved. Even Aristotle’s lost book on Comedy may lie, still to be deciphered, in some long-frayed, forgotten palimpsest. As words are delegated to hard drives, one is tempted to ask whether another loss might be added to our lot – the loss of tactility, corporeality, the image of an individual hand tracing the course of an individual mind. Van Straten’s search for lost books is a rewardingly, reassuringly old-fashioned quest in so very many ways; it is even a quest for old-fashionedness itself.

In Search of Lost Books