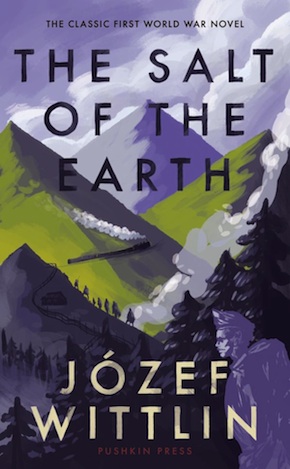 #RivetingReviews: Mika Provata-Carlone reviews THE SALT OF THE EARTH by Józef Wittlin

Józef Wittlin, like Homer’s Odysseus whom he so much admired, was a man of many minds, human experiences, geographical and national homes. Born in Galicia, then part of the Austro-Hungarian Empire, he would come to be hailed as one of the most important voices of a new-born independent Poland. A Jew by birth, a Christian by choice, Wittlin lived through what were perhaps some of the most formative, spectacular, dramatic and horrific years of European history. A friend of Thomas Mann and Joseph Roth, his writings are reflections of a past that was fast disappearing, as though it had never even existed.

Wittlin left Europe in 1941 for America, escaping the Nazis in Paris. He would spend the remaining years of his life in New York, translating, writing, speaking in public about stories and history, about the duty of being human. His most famous work, The Salt of the Earth, came to stand as one of the primary WWI narratives and was an immediate success, translated into English by Pauline de Chary for Methuen & Co. in London in 1939, only four years after Wittlin’s original was published. It captured the hearts and minds of readers across the Western world, becoming a landmark of the interwar imagination. Wittlin’s hero, Piotr Niewiadomski, was, even in name, the Unknown Soldier, the unnamed everyman engulfed and gobbled up by a history that had become a nemesis and a nightmare. Piotr is the ‘salt of the earth’ not so much by virtue of his individual drama and humanity, his martyred pathos or tragedy, but rather because of his nondescript uncomplicatedness, his naïve perspective or even lack of perspective, the very simplicity and dullness of his mind and being.

Unlike Mann, Roth and Zweig, Wittlin’s universe is that of the simple, the lesser, the undistinguishable and the inconsequential. History changes faces as well as hands, actors become onlookers, and Wittlin presents us with the sense of an ending and apocalypse by way of a determined process of defamiliarisation, through distinctly ironic, yet never sarcastic perspective, tone and theatricality. Cocteau’s Thomas the Impostor meets Brecht’s Mother Courage and Erich Maria Remarque’s All Quiet on the Western Front. It is a technique that is both unsettling and engrossing, indulgent and forceful.

WWI emerges as not only a war between nations or classes, but especially as a clash between orders and conceptions of time and eternity, a confrontation between modernity and a still feudal, preindustrial society and frame of mind. It is a war that could have easily been transposed onto Napoleon’s campaigns or Goya’s Black Paintings, if it weren’t for the magnitude of the carnage, the nascent awareness that there is more to life than mere existing.

The Salt of the Earth is a paean to death, yet not a song of lament to life; it is messianic, apocalyptic and unsettlingly prosaic, and it leaves the reader with as strong a sense of loss, tragedy and pathos, as well as with a shocking sense that there is something deeply sinister in its subtext. More than anything, it is a time capsule of everything that would lead to an even greater horror and destruction than the war to end all wars. It contains the historical conditions and components that would constitute the toxic fertilisers for the future: the socioeconomic factors, the political contingencies, the geodemographic circumstances. Most grimly, it provides, or even engenders, the language, the existential rhetoric for all that was to follow.

The Salt of the Earth is a tableau of a decaying, dismembered empire, out of which Poland would be born in 1918. Whether it is a guiltless transcription of that moment in time is perhaps the most tragic aspect of the events and circumstances, the world it evokes and depicts. If anything, Wittlin’s novel bears witness, whichever way one reads it, to the power of deception and misperception, to the proclivity of human groups throughout time to blindly ignore or to uncritically perpetrate, even endorse, what is most inhuman. And that is certainly one of the darkest, most lethal forces that have ever damned and condemned the past, the present and the future of mankind.

THE SALT OF THE EARTH