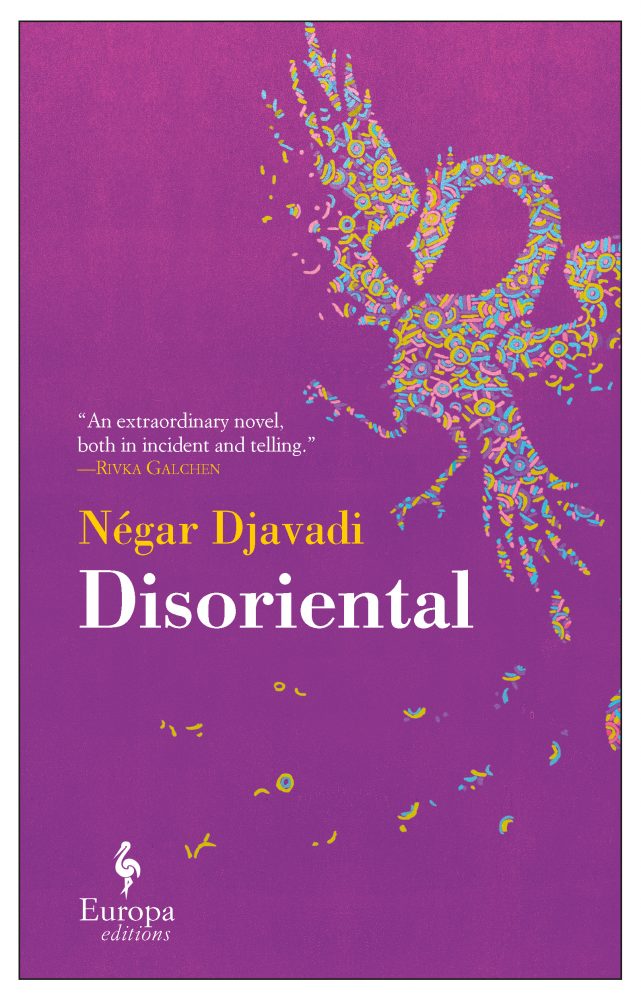 ‘The truth of memory is strange, isn’t it? Our memories select, eliminate, exaggerate, minimize, glorify, denigrate. They create their own versions of events and serve up their own reality. Disparate but cohesive. Imperfect yet sincere.’

Thus begins a compulsive, fiercely resisted, yet inevitable journey into memory in this in many ways extraordinary novel – the memory of a family, a nation, an identity, the archetypes of an impossible, yet indispensable exilic remembrance and space.

Négar Djavadi succeeds in summoning ghosts and demons of Persia’s past, fallen angels and tragic martyrs of its future as Iran, the dark shadows of a today that is as much beyond reach for her main character as it is for many beyond comprehension or even conception. Her brandishing of facts and chronologies is meticulous and commanding, her narrative is textured, prismatic, and in turns fast and furious, then a soulful lament in the many minor keys of the Orient. She paints for us in broad, daring, often explicitly provocative brushstrokes an immense tableau of glory and decay, or of simple, broken lives, filling it with intricate details of names, genealogies, events, cultural echoes and historical monuments as rich as an arabesque. A reminder of all that once was, all that the West (and perhaps Persians/Iranians themselves) may have all but forgotten. In a way, the theme of Disoriental could be summed up in a twist of the words that used to be inscribed on old grandfather clocks: ‘Time is. Time was. Time will never be.’

Djavadi writes in a palindromic motion between past and present. She gives us a vast, kaleidoscopic panorama of the early twentieth century under Qajar rule, returns repeatedly to the land’s tribulations in the hands of the Russians, the British, the French and the Americans, and focuses unflinchingly on the assassinations, machinations, and the rough friction with oncoming modernity that sealed the country’s fate. The Shah and Khomeini, the Revolution and SAVAK terror loom over the biographies, underpinning what is no less than a dirge and paean to a country and its people. Disoriental is a waterfall of words and memories; of emotional states and the most intimate states of being; of echoes of a culture, a history few now suspect or can recall to memory and to imagination, let alone wish to acknowledge as a presence, a force, as the vital, mystical, broken path of many lives. At its most poignant, Disoriental is about the voices compelled to speak about a nation once noble and mythical, but now deemed an incomprehensible anathema.

Djavadi populates her determinedly biographical story (she has resisted the term autobiographical) with formidable, not always benevolent women, with complex, complicated men, with the pungent scents and opulent gestures, the mythical reality, superstitions, dark secrets and webs of the Orient, but also with the starker reality of the exotic, irresistibly alluring, terrifying and alienating otherness of Paris, and of French words rolled on Persian tongues. Hers is a historical narrative that engulfs, amoeba-like, or sterilises, amputates, eradicates. Lost homelands, identities, rituals binding one to life, exilic places or states of belonging become the contending forces ruling the psyches of her characters, who seem suspended over the yearned-for yet almost always impossible space of their existence, beyond the time of a sense of being.

This is an impulsive, de profundis novel, as much a historical testimony (the narrator defines herself as the guardian of stories, the voice of memory), as it is a double-act – a love poem to a culture and people and a steely, often angry clinical report dissecting every layer of that nation’s identity, psychodrama, guilt, destiny and fatalism. When the story focuses on the historical experience of individuals, on the existential, national, personal trauma of a moment in time whose duration is still ongoing, Djavadi’s writing has the quality she singles out as emblematic of her country – it possess truly impressive ‘raw, terrible beauty’.

Disoriental will certainly leave readers both shocked and gripped, in the very best sense of the words, and hopefully it will lead to unsuspected encounters with its themes beyond its pages. It rings with the echoes of many, honeysuckle-scented Arabian Nights, as well as the cruel weight of a haunting history beyond fables and tales, with human stories we would do well to listen to.

Translated from the French by Tina Kover