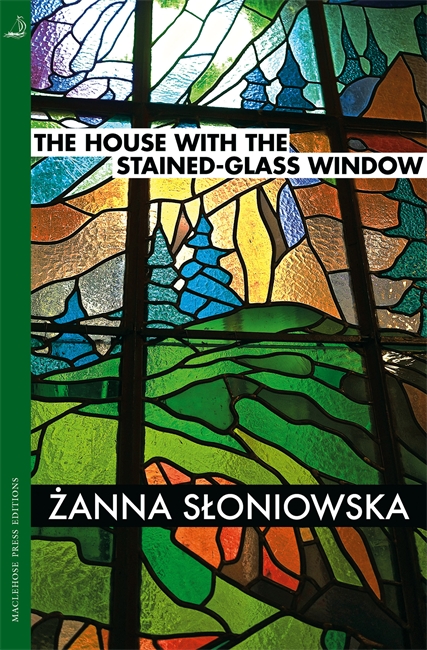 Like Troy, Lviv was sieged and attacked ferociously, repeatedly across its long history. It has been a war zone, a battleground, the heart of vicious internecine or multi-ethnic conflict and unutterable atrocities. Unlike Priam’s city, the many layers of the material corporeality of its polis remain intact – each coexisting and fraternising with the other as a constant reminder of the many faces, voices and traditions that formed, once, the city’s soul, as echoes, soft or howling, alluring or outright terrifying, of stories that even if told, were often refuted, smothered, erased.

In The House with the Stained-Glass Window, Żanna Słoniowska aims audaciously, but also elegiacally, to reunite the carcass of stones, statues, landmarks and homes with one part, at least, of its ailing soul. The novel begins with a death that kicks off a life, and perhaps the ending mirrors the beginning, a circle come full spin, in a spiral of still very troubling history.

Four women with stories screaming to burst out of sealed, dead, unripe or shrivelled lips; men who exist as foils or as titanic determinants of fate; art as the lens of truth, as the power of genuine being and as a fatal mirage, blurring ideals with monstrosities. Love, female rites of passage, an education, wriggly roots and clean new shoots, everything is part of this vastly ambitious, urgently told story. We move in and out of time and spaces of memory, or of unrealised dreams, within a moral numbness and existential limbo that the narrator assigns to the Soviet era of the city. The tone is full of nostalgia and poetry, the poetry of the Silver Age poets, the art of early twentieth-century Vienna, the music of Chopin; it is full of fear, real fear from possible, actual brutality, from unspoken, unspeakable memory, or the undefined, inarticulate terror of the limitlessness of oppression and its horrific possibilities.

There is an Autumn Sonata feel to the relationship between the narrator and her mother Marianna, an opera singer whose voice can fill spiritual and revolutionary voids, but not lives: Bergmanesque darkness with Kundera-like lightness and roughness in the depiction and relief of characters. The atmosphere throughout is a striking, gripping blend of finely balanced verbal and situational comedy, with particularly delicate, yet unflinching exposures of the human psyche, the mere physis of the body. If there is truth in the statement that at the heart of the Slavic soul is exaggeration, The House with the Stained-Glass Window would certainly offer good proof of it: it brings together gaily, soulfully, with brio and melancholy, a strong folklore vein with a modernist abandon and an absurdist/surrealist tradition. The influence of Russian/Soviet writing – the flighty humour of Teffi, the dark comedy of Chekhov, Bulgakov, Gogol and Nabokov, Vera Panova, or Tatyana Tolstaya, lie subtly behind Słoniowska’s own pitch and voice, together with the consciousness of being part of a whole far greater than the sum of its parts, as well as of a heritage that combines the methodical, fearsome farcicality of the Soviet era with an ever evasive, deeply rooted need for identity – Soviet analytics crossing paths with magic realism, human frailty and the despair of burlesque.

Among the laughter and the tears, there is brutality, coldness and harshness, by history and by individuals. There is a troubling sense of timelessness, or of a fish-eye perspective into time, wherein many, tangled roots and rootlessness, stories and the state of forced storyless-ness, acquire a gargoyle-like focus and deceptive frame. The House with the Stained-Glass Window makes unsettling, yet engrossing reading, as images of the city’s architecture, its history, clash with current Ukrainian headlines and older, stifled voices and lives – of the alternately dominant ethnic Slavic groups, of the horrifically, relentlessly decimated Jewish community, that in the end gets an eerie mention in this novel of rebirth and catastrophe.

Słoniowska has written a story that is infused with the rare gift of a genuine voice enveloped in intriguing mystery. Pain and a deep human gentleness combine with fluid, rich elegance. A deeply poignant, charismatic novel, fully resonant in Antonia Lloyd-Jones’ masterfully fluent translation.