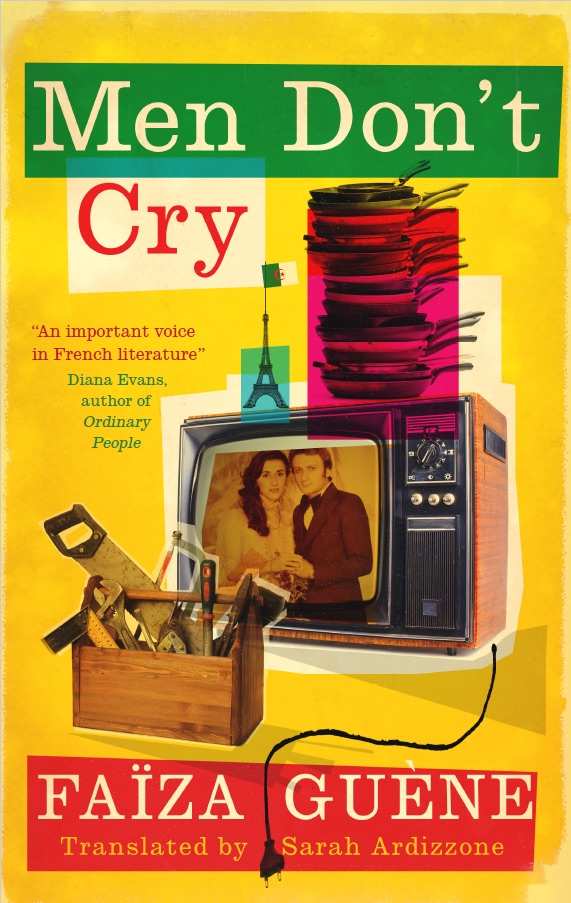 Fizzing with wit and energy, Faïza Guène’s coming-of-age novel Men Don’t Cry tells the tale of an Algerian family in modern-day France, spicing up the familiar flashpoints of generational differences with sparkling portrayals of three siblings caught in the double bind experienced by children of immigrant parents all over the world: how to walk the tightrope between honouring the values dear to their parents and rejecting those values in a bid to become integrated into the wider society around them. The tale unfolds in dialogue-rich prose, the characters’ speech punctuated with the rhythms and imagery of French urban backslang – the street language peppered with Arabic words that is the lingua franca of France’s suburban cités. Sarah Ardizzone has risen admirably to the task of translating this rich and expressive language into English, retaining all the humour and poignancy of Faïza Guène’s distinctive voice.

Narrator Mourad lives with his parents and two sisters in a suburb of Nice that is far from affluent. Determined not to be smothered by his mother’s all-consuming love, he charts his way between the diverging paths chosen by his sisters, Dounia and Mina. Dounia, the sparky, independent-minded older sister, turns her back on the family, desperate to avoid the ‘path of mediocrity’ she sees ahead of her if she follows in the footsteps of her illiterate mother, whose life revolves around feeding her beloved children and watching Mexican soap operas dubbed into Arabic on television. Dounia excels in her studies and becomes a chic and celebrated feminist activist and writer, ‘the darling of the Parisian elite’. But as Mourad wryly observes, Dounia’s appeal lies in ‘symbolising what the Republic does best: producing accidental success stories’. The price she pays for her freedom is heavy: not only does she cut herself off from her family, but she remains, in Mourad’s view, condemned to be an outsider in French society.

Mina, meanwhile, chooses to conform. She marries an Algerian boy from the neighbourhood, has three children, works in a care home and never strays far from the parental home. Mourad, who, like Dounia, excels at school, seeks the middle way and eventually becomes a teacher. Finding himself posted to Paris, he plunges straight into the louche and glitzy world inhabited by his undocumented cousin Miloud, a smooth operator who lives in the lap of luxury with his much older French heiress lover. Facing the daily challenges of life as an inexperienced teacher in a tough secondary school, Mourad floats between all these worlds, determined not to fall back into the loving arms of his parents, where he fears ending up as no more than the plump, pampered only son fulfilling his parents’ dreams of passing on the traditions that shaped them.

The novel provides many humorous moments, but the underlying pathos is ever-present, particularly in the affectionate depictions of Mourad’s parents: the larger-than-life matriarch with her emotional outpourings, and her husband Big Baba, the illiterate patriarch who was once a cobbler and now spends his days collecting and tinkering with bits of old junk that litter the space his wife had once dreamed of turning into a garden of flowers. It is Big Baba who admonishes his son to show forbearance: ‘men don’t cry’, he tells him repeatedly. But his personal suffering, the loss of his country and his roots, his beloved daughter’s rejection of all he holds dear, and eventually his own physical demise, lead him to acknowledge his true vulnerability. Even within the sharply defined gender roles of traditional Algerian society, there is space after all for a man to shed a tear.

Both hilarious and sad, Men Don’t Cry offers a vivid portrait of a family and a society in flux. Written with a lightness of touch, this entertaining and enjoyable read nevertheless asks important questions and offers new insights into the experiences of individuals caught between the conflicting demands of traditional values and modernity.

Translated from French by Sarah Ardizzone

Aneesa Abbas Higgins is the translator of numerous works from the French. Her translation of A Girl Called Eel by Ali Zamir (Jacaranda 2019) was awarded the Scott Moncrieff Prize 2020. Her most recent translations are Winter in Sokcho by Elisa Shua Dusapin (Daunt Books, 2020), On Terrorism: Conversations with my daughter by Tahar Ben Jelloun (Small Axes, 2020) and All Men Want to Know by Nina Bouraoui (Penguin Viking, 2020).