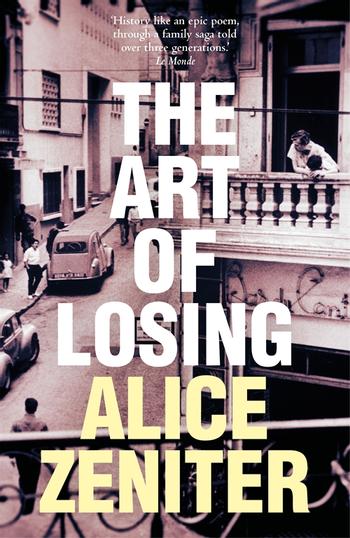 Alice Zeniter’s multi-generational family saga is a compelling tale of a family caught in the fallout from France’s ill-fated colonial past. Written in sparkling French prose, rendered seamlessly into English in this excellent translation by Frank Wynne, Zeniter’s novel leads us through the complexities and contradictions of Algeria’s painful separation from France. The narrative centres on a family from the mountainous Kabyle region of Algeria, whose patriarch, Ali, finds himself cast as an outsider and enemy in his own homeland, becoming almost inadvertently one of a group known as harkis, Algerians who had been in some way associated with the French colonial masters. Occupying a unique and complicated position within the Algerian diaspora in France, harkis have been variously despised, misunderstood and ignored: ‘Algeria will speak of them as rats. Traitors. Dogs.’ ‘France will not speak of them at all.’ The Art of Losing humanises this strand of history and situates it in the context of ongoing post-colonial issues of identity and belonging.

The novel opens with Ali’s granddaughter, the very Parisian Naïma, struggling to make sense of her ostensibly glamorous existence. Her mind turns to her large Algerian family, of whom she knows very little, and she sets herself the task of finding out more about the land of her father’s birth. Her quest provides an effective framing device for the novel, as Naïma pieces together the ‘twisted shards’ of memory gleaned from family members and immerses herself in history books and Wikipedia to flesh out the background to their tales.

What follows is a densely packed narrative abounding in historical detail and peopled with richly drawn characters. Towering over them all is Ali, the family patriarch, who is wrenched from a life of relative prosperity in the idyllic hills of Kabylia and reduced to the poverty and drudgery of one of France’s suburban cités. A brief time spent in the French Algerian forces during the Second World War sealed his fate as a harki. Finding himself caught in the crossfire of uprisings and brutal reprisals during Algeria’s struggle for independence, Ali brings his growing family to France, only to come face to face with the harsh realities of his situation as a penniless immigrant, initially interned in a squalid camp and eventually employed as a factory hand and living with his wife and children in a cramped, run-down apartment. Ali’s eldest son, Hamid, grows up between the camp and the cité, and buries the traumatic experiences of his childhood, locking his past away behind an impenetrable wall of silence and passing none of his Algerian culture on to his own four daughters. Integration for Hamid is ‘a scorched-earth policy’ that refuses all acknowledgement of his roots. Doted on by their mother Yema, who never learns to speak French or negotiate the French way of life, Hamid and his numerous siblings struggle to find their place in a society that both nurtures and rejects them.

Zeniter’s prose is fresh and unsentimental. She tells her often harrowing tale in a straightforward and restrained fashion, with flashes of poetic intensity. The Art of Losing evokes an experience that is at once particular and universal, and, like all good historical fiction, it brings the past to life and throws light on the present. Towards the end of the novel, Zeniter takes us to modern Algeria and presents it to us through the filter of Naïma’s contemporary sensibilities. For Hamid, Algeria remains ‘an absent country’, but for Naïma, her quest has offered her the possibility of healing an ‘unsuspected wound’ within herself.

The Art of Losing is a dazzling achievement: a deeply human page-turner that is both moving and instructive. Much of the truth about Algeria’s separation from France, and the treatment of the harki community and other Algerians in France, has long remained unexamined. Only through confronting the unpleasant truths of the past and looking present realities in the face can we come to terms with the complexities and ambiguities of our modern world. Zeniter’s novel goes some way towards helping us to do just that.

THE ART OF LOSING

Aneesa Abbas Higgins is the translator of numerous works from the French. Her translation of A Girl Called Eel by Ali Zamir (Jacaranda 2019) was awarded the Scott Moncrieff Prize 2020. Her most recent translations are Winter in Sokcho by Elisa Shua Dusapin (Daunt Books, 2020), On Terrorism: Conversations with my daughter by Tahar Ben Jelloun (Small Axes, 2020) and All Men Want to Know by Nina Bouraoui (Penguin Viking, 2020).