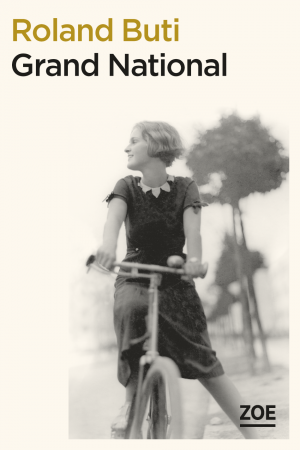 Prize-winning Swiss novelist Roland Buti writes novels that seem at first glance to be charmingly bucolic. Indeed, his most recent novel, Grand National, does take us from the greenery of allotments and gardens in a small Swiss town to the splendour of the mountain location of the palatial Hôtel Grand National of the title. But behind the beauty of the décor lies a sense that something is amiss, that the narrator (and perhaps the reader) is drifting through life and failing to see or understand much of what is going on around him.

The novel, which has not yet been translated into English from the French, opens as Carlo Weiss muses on the failure of his marriage. Since his wife of sixteen years left him alone in the flat they shared he has been eating his breakfast in the local café, often in the company of his friend and employee, Agon, a gentle Kosovan refugee with a penchant for philosophy and the classics of French literature. Carlo is a landscape gardener and it is only when he is at work, weeding, hoeing and planting, that his sense of being at odds with the world leaves him. He and Agon spend many pleasant evenings in easy conversation as they sit surrounded by luxuriant vegetation outside the cabin Agon has built for himself in the allotment he tends so lovingly.

Carlo’s sense of being out of step with the world becomes more marked when he learns that his aging mother, Pia, has fled her care home and is nowhere to be found. He eventually finds her installed in the Hôtel Grand National, a once prestigious establishment in an idyllic mountain setting near the village where she grew up. Pia resists all attempts to be dislodged, offers no explanation for her flit, calls her son by the wrong name, and reveals a hitherto unknown talent for watercolour paintings of birds. As Carlo explores the roots of these misunderstandings, he realises how little he knows of his mother’s life. He has never looked below the surface of the face she has presented him.

Carlo’s world is further shaken when Agon is viciously beaten and his home wrecked by two of his fellow countrymen. The explanation for this violence lies in Agon’s past, and, like his mother’s behaviour, shocks and surprises the baffled narrator. But Roland Buti does not dwell for too long on the tragic underpinnings of his character’s lives, preferring instead to offer us moments of tender irony and sometimes comedy. Agon’s injuries provide Carlo with the opportunity to attempt a reconciliation with his estranged wife, Ana, who is a doctor at the hospital where he takes Agon for treatment. In an attempt to reignite the spark that once fired their married life, Ana and Carlo decide to go together to London, where their daughter is studying art, but when they attend an exhibition in her honour, Carlo utterly fails to comprehend his daughter’s installations. Carlo has understood as little of his daughter’s inner world as he has of his mother’s, his wife’s and his friend’s. ‘Perhaps,’ Carlo muses towards the end of the novel, ‘life is nothing but a series of parentheses that open and close again, with spaces in between that can’t be explained.’

Buti’s prose seduces us with its humour and gentle irony in a novel that interweaves comedy and tragedy. As Carlo’s life comes apart at the seams, he begins to see just how much he has been blind to, both in his own life and in the lives of those around him. Currently available only to those who read French, Grand National is a beguiling work that lingers in the mind and invites us to wonder just how much we too may be missing as we stumble through our lives.

Aneesa Abbas Higgins is the translator of numerous works from the French. Her most recent translations are Winter in Sokcho by Elisa Shua Dusapin (Daunt Books, 2020) and On Terrorism: Conversations with my daughter by Tahar Ben Jelloun (Small Axes, 2020). Her translation of Nina Bouraoui’s All Men Want to Know will be published by Penguin Viking later this year.