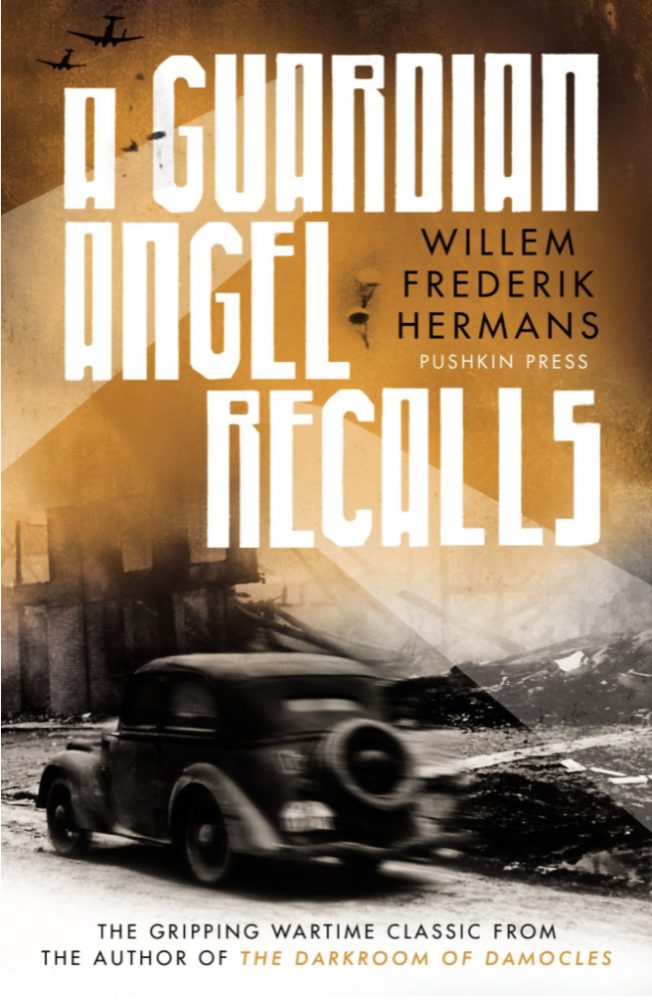 For many years only two novels from Willem Frederik Hermans’ prolific output (Beyond Sleep and The Darkroom of Damocles) were available in English. They fell out of print, but Pushkin Press not only republished them – much to my delight – they commissioned more Hermans, with David Colmer taking over translation duties from Ina Rilke. At the end of this month Colmer’s second Hermans translation, following the novella An Untouched House, hits the shelves. Just shy of four hundred pages, A Guardian Angel Recalls is an autumnal megatreat. It is also the novel that Hermans thought he wrote most beautifully.

No one does the Dutch Occupation like Hermans. While The Darkroom of Damocles and An Untouched House are set in late WWII and the post-war period, A Guardian Angel Recalls takes us back to 9 May, 1940, a lousy day for Simon Alberegt, a middle-aged public prosecutor with a combover and an addiction to peppermints. He has just bid farewell to his girlfriend, Sysy, a German Jewish refugee who has boarded a ship to America. Emotionally despondent, and in a hurry to reach the courtroom for the closing arguments against someone accused of insulting Hitler – the leader of a friendly (!) nation – he takes an illegal shortcut and causes a fatal accident. After disposing of the body in a particularly callous fashion, he – the public prosecutor, remember – drives on. This is the set up for the ethical dilemma that will pursue him throughout the novel.

Access to his inner thoughts is assured because the narrator is Alberegt’s guardian angel – a truly sympathetic character, considering he is not only safeguarding an atheist but is also written by one. The angel seeks always to steer Alberegt’s thoughts in positive directions and away from the influence of the devil – not always successfully, it is true, and sometimes with theologically dubious reasoning. Nevertheless, the angel is a wonderful character. Who can fail to be charmed by a spiritual creature that covers his face with his wings when shamed by either himself or his ward?

Back in the courtroom, with his head thrumming with manslaughter/murder debate and his heart demanding he leave the country to catch up with Sysy and/or escape the consequences of his actions, Alberegt surprises himself by ignoring his prepared script and asking the judge to dismiss the charges. He thus potentially marks his card with the Germans who, the very next day, invade. While this adds further justification to his ‘I must get out now’ argument, doing so would make him a traitor, since as a member of the judiciary he is duty bound to remain in place to preserve some semblance of order in a time of crisis. (Unlike the royal family and government ministers, who flee to Britain post-haste.)

Over the ensuing four days, Alberegt’s personal confusion is mirrored and magnified by that of his country as it is vanquished by Nazi troops. We experience that defeat, not on the front line, but through the eyes of Dutch civilians: Alberegt himself, and his friends Erik and Mimi, who live in a leafy suburb outside Rotterdam. Can they believe what they hear on the radio, that the Dutch forces, equipped with only twenty-three fighter jets, are mounting a vigorous defence? Have the telephone lines really been cut by the authorities for security’s sake, or is it an act of sabotage by the fifth column? Hermans’ exposition of a naïve nation that believed itself done with war is exquisite. Nothing is forced, with detail emerging through the progression of events or in natural conversation. Nor is anything more telling or absurd than when Alberegt, having narrowly escaped being blown to smithereens at the courthouse, drives to Erik and Mimi’s house to find Erik in his war gear: ‘The thing on his head was a colander. It was what the newspapers had recommended.’ Erik, like his nation, is delusional, but reality bites on 14 May with the firebombing of Rotterdam, which Alberegt, Erik and Mimi witness in total shock from their vantage point on the terrace.

The nation surrenders, and then it really is time to flee. Not just for Alberegt, but also for his brother, Rense, a degenerate artist, as per the Nazi definition, and Erik, a publisher of subversive literature. Alberegt seems to have come to terms with his earlier actions; by this point, he reasons, what is one more body among so many war dead? Yet Erik unknowingly has connections to Alberegt’s victim, and these delay their flight, in turn forcing Alberegt to face the consequences of his part in a second tragedy. I wouldn’t call it divine justice, because the guardian angel demonstrates that his god would not be so malign, but it is a masterstroke of structure and plot, with Hermans himself being just a little devilish.

Translated from Dutch by David Colmer

Lizzy Siddal is a British bibliophile and book blogger. She runs German Literature Month every November, now in its tenth year, on her blog Lizzy’s Literary Life.