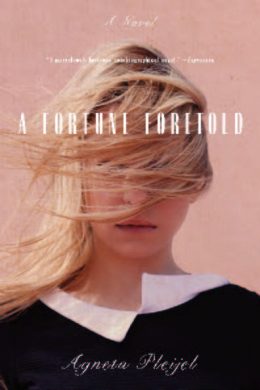 The coming-of-age novel is almost a rite of passage for the emerging novelist, a vehicle through which a voice is found and the burden of lived experience lightened. A Fortune Foretold, from the acclaimed Swedish novelist Agneta Pleijel, shares many of these characteristics, but Pleijel has waited until late in her long and distinguished career to produce this penetrating analysis of the childhood, adolescence and early adulthood of a woman whose young life was scarred by the dawning realisation that her parents’ marriage had been lived “without the slightest vestige of honesty”.

Pleijel’s mature voice, translated here by Marlaine Delargy, is both distinctive and uncompromising, as the narrator Neta delves into the treacherous swamp of her own memory and tries to discover how the child of those memories became the woman she is now.

The child and the mature woman are clearly differentiated in the novel, with the narration alternating between the “I” of the narrator’s voice looking back and the “she” of the girl speaking in the remembered past. It took me a few pages to become used to this unusual approach but I was soon drawn into the world of the bookish child growing up in post-war Sweden with her father, a professor of mathematics, and her mother, a gifted pianist whose own career had been derailed by marriage, motherhood and the infirmity imposed on her by childhood polio.

Neta navigates her way through school, always seeking refuge in books in order to make sense of the world around her. With the adults shrouding themselves in silence, anything unpleasant or shameful shunned in conversation, the young Neta realises very early on that the subject of sex is the biggest taboo of all. However, Pleijel’s treatment of the young girl’s sexual awakening is forthright and unstinting. From the child’s obsessive desire to know what adults get up to, through the fumblings of adolescence and the restless promiscuity of her early adulthood, Neta strives to find a way of uniting body and soul. When the veil covering her parents’ relationship is torn away, and the deception and betrayal that had eroded it  are revealed, she is forced to confront a harsh truth: “So this is love stripped bare. This is the god Eros. And Eros turns out to be evil. Destructive.”

As her mother crumbles and sinks into depression, the adolescent Neta feels she is forced to live inside her mother’s despair. Torn between a father she loves and a mother to whom she feels bound by an intimate, visceral bond, the young Neta turns throughout the novel to her beloved aunt, Ricki. It is to Ricki that the fortune of the title is told, and it is the trajectory of Ricki’s life that provides Neta with the final epiphany of the narrative.

A Fortune Foretold is an engrossing and memorable novel. Pleijel’s direct, uncompromising voice leaves us in no doubt that the burden placed on the child by a failed marriage is very heavy indeed. But Pleijel’s treatment of this bleak subject is far from despairing. Neta’s memories and revelations may be suffused with the melancholy that invariably accompanies age and maturity, but her tale is peppered with zest and humour and enlightened by a restless intelligence and desire to understand.

Published by Other Press, 2017