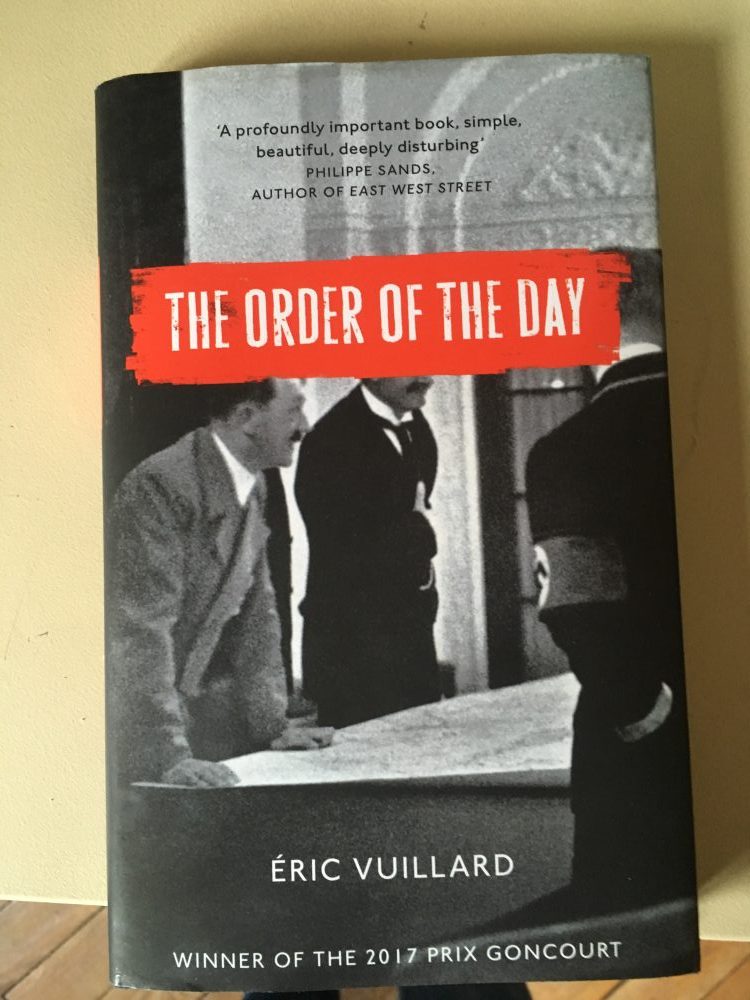 #RivetingReviews: Aneesa Abbas Higgins reviews THE ORDER OF THE DAY by Eric Vuillard

On a cold and wintry February day twenty-four soberly suited men gather in the glittering surroundings of an official residence to discuss business matters. Passing through doors ‘obsequiously held open’, the ‘venerable patricians’ exchange pleasantries as they await the arrival of their guest speaker. But this is no ordinary business meeting – it is 1933 and these titans of industry have gathered to pledge their support for the Nazi party in the upcoming German elections. The directors of Opel, Siemens, Bayer, BASF and others nod in approval as first Hermann Göring and then the new chancellor, Hitler, make their pitch. Hitler assures the industrialists that a victory for the Nazi party will guarantee security, stability and an end to the threat posed by communism and the unions. Accustomed to paying for lobbying fees and making gifts of one sort or another to political causes, the assembled ‘sphinxes’ and ‘lizards’ readily pay up. ‘And there they stand, affectless, like twenty-four calculating machines at the gates of Hell.’

Eric Vuillard’s The Order of the Day, a slim volume, easily devoured in one sitting, is a striking and unusual description of the events leading up to the Nazi’s annexation of Austria, and of the politics of appeasement. Reading this gripping account of those events, one cannot but experience an ominous sense of foreboding: Vuillard reminds us that ‘great catastrophes often creep up on is in tiny steps’, an observation that will reflect an all too familiar sense of doom for many a reader. In a series of vignettes evoked in often sumptuous prose full of rhetorical flourishes – translated here with verve and confidence by Mark Polizzotti – Vuillard offers us his insights into the events surrounding the Anschluss. Much of the narrative is familiar, but it is Vuillard’s novelistic treatment of his well-researched material that makes it so compelling.

We watch as the major European powers turn a blind eye to the machinations of the Nazi regime. We observe how the Nazis successfully manipulate the political situation in Austria, replacing one weak and cowardly leader (Schussnigg, who survived the war and lived to become a professor at a respected US Catholic university) with Hitler’s chosen bully, Seyss-Inquart, a notorious Nazi later hanged after the Nuremberg trials. And as Hitler’s burgeoning fleet of Panzers rolls into Austria, we are treated to the farcical scenes that occur as tanks break down and the convoy stalls. Vuillard shows us how the cheering blond crowds mask the reality of the tragedy engulfing the country: the suppression of all opposition and the persecution of the Jewish community. Seventeen hundred suicides were reported in the days following the Anschluss and the subsequent referendum, after which it became illegal to report suicide as a cause of death.

Vuillard makes no bones about his attitude to his subjects, pouring scorn on those who were complicit in the events of that time and reminding us that many of the appliances and gadgets that make our modern lives so comfortable are produced by the very companies that profited from the suffering of the Nazis’ victims. The titans of industry of that time may be long gone, but ‘companies don’t die like men. They are mystical bodies that never perish’. Bayer, IG Farben, BMW and many others all used slave labour from the most notorious of the concentration camps. No wonder Gustav Krupp, a magnate who made his contribution to Hitler’s political machine in 1933 and peopled his factories during the war with the starving inmates of the camps, was haunted by visions of ghosts as he dined in his palatial residence in 1944.

Equally chilling for the contemporary British reader are the scenes depicting what went on in the heart of the British establishment in the days leading up to the war. Vuillard gives short shrift to the ever-polite British appeasers, quoting a letter from Halifax to Baldwin in which Halifax asserts that nationalism and racism are not inherently immoral, and that Nazi policy was quite understandable in the context of defeating the threat of communism. Surely, Vuillard asserts, Halifax – a wily politician who dined and hunted with Göring while pursuing the official policy of appeasement – must have known who he was dealing with: ‘he must have divined the horrifying core beneath the pasty, bloated mask’.

Much of this seems disturbingly relevant to our modern age. Vuillard drives home his point and reminds us that those long-dead villains are not ‘antediluvian monsters’ who faded into history. Enormous fortunes were amassed and companies merged to form ‘omnipotent conglomerates’. The ‘austere and stultifying patriarchy’ of the meeting evoked at the outset of this account has morphed into other equally amoral entities. The abyss that Europe fell into in those dark days still lurks, ‘bordered by mansions’ while history looks on: ‘we never fall twice into the same abyss’ Vuillard observes, and adds, ‘but we always fall in the same way, in a mixture of ridicule and dread’.

THE ORDER OF THE DAY