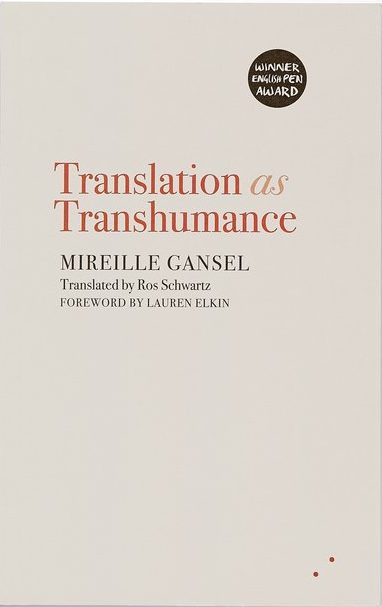 Twice a year, on mountain roads and tracks all over the world, sheep and livestock make their way between alpine summer pastures and lowland winter meadows in a practice known as transhumance. This image of shepherding flocks across the land forms the striking central metaphor of Mireille Gansel’s account of her lifelong devotion to her calling as a translator. She writes of her struggle to do justice to the writers and poets she has translated, to find the hidden meanings of their words and carry them across the “gulf of silence” that exists between languages. In this short book, Mireille Gansel nonetheless gives us a profound meditation on the art and practice of translation, written in richly poetic language that is itself translated here with great sensitivity and consummate skill by Ros Schwartz.

Like many translators, Gansel grew up in a multilingual environment. Her family were caught in the crossroads of the Austro-Hungarian Empire, where German, the language of her parents and of her grandparents’ Nazi persecutors, had become both a common language and a symbol of the oppression they suffered. For Gansel, German was above all the language of the poets, an “interior language – profound, intense, fervent”, a language that had “no land or borders”. But German was also a language that had been subjected to the ravages of Nazism, and Gansel’s youthful engagement with the work of Brecht and other East German writers was inspired by their resistance to the “Nazification of the German language”. Later, she was to pursue her dedication to translation as resistance, by travelling to Vietnam at the height of the Vietnam War to participate in a project to publish an anthology of Vietnamese poetry in French. In an extraordinary and revealing chapter she describes how she devoted herself to studying Vietnamese language and poetic traditions, in an effort to counter bombs with poetry. We read of poetry written on leaves and passed from hand to hand by prisoners in the notorious ‘tiger cages’, and of the wonders of the tradition of Vietnamese cantillation, the practice of chanting the poems of this tonal language to the accompaniment of the single-stringed Vietnamese monochord.

The art of translation and the practical realities involved in realising that art can too often remained shrouded in mystery, and the theme of translation as resistance is one that will surely give the reader food for thought. But it is the insights that Gansel gives into the nitty-gritty of the way she has approached her own work that provide the most alluring gems of this slim volume. Gansel explains how she struggled to find a translation for the German word sensibel: how she sought to unearth its meaning in the personal language of the poet she was translating, how she opted for “fragile”, only to change her mind thirty years later and replace it with “sensitive”. We read of the painstaking, four notebook strategy she adopted for her work on the Jewish-German poet Nelly Sachs, a strategy that enabled her to bring to light the multiple levels of meaning in the poems, from the literal meanings of the words, to the connotations around them, the deeper meanings revealed in the poems’ structure, and finally, to the hidden, esoteric meanings buried deep within the poet’s personal codes. This is what translators seek to do in all their work, the essence of that long journey from one pasture to another, which Gansel and her translator Ros Schwartz have so movingly exposed in this book.

This is a small but richly rewarding book, packed with gems about the challenges and unexpected delights of translation, which will prove irresistible not only to translators but also to all those who have ever wondered just what is involved in translation. It is also a timely reminder that crossing borders is a human need and that however many barriers are erected to divide us, ways can be found to pierce them and understand our common human language.

Translated from the French by Ros Schwartz