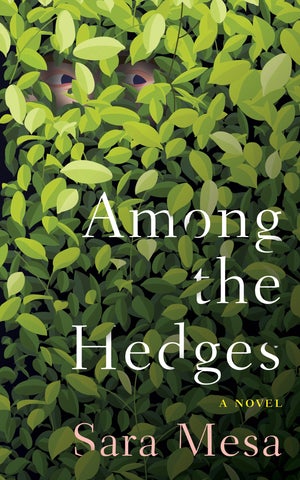 #RivetingReviews: Alice Banks reviews AMONG THE HEDGES by Sara Mesa

This brilliant short novel by Sara Mesa primarily takes place among the hedges where a thirteen-year-old girl, who we only know as Soon, finds refuge from school. Each day she settles in the hedges and wiles away the school day unnoticed, unobserved and alone. Soon is a shy and lonely girl who is increasingly disillusioned by the concept of school. After being bullied by a group of girls in her class, she is tipped over the edge and vows never to return. So, as she leaves home every morning, instead of heading to school, she makes her way to the park.

Just a few days after she has found this spot, which she assumes to be adequately hidden, she is discovered by an elderly man, who each time he enters the hedges, stays longer and longer. While Soon is at first wary of this character, each day ‘Old Man’ spends more and more time with her among the hedges, and Soon realises that he is harmless. Slowly the pair begin to interact more and more. They never share their names, however: she calls him Old Man, and he calls her Soon, after she declares she is thirteen, but will be fourteen soon.

The pair share snacks and Old Man teaches Soon about life, birds, and Nina Simone. We begin to find out more about Soon’s life and realise she is a very lonely and troubled child. Old Man, however, lives an even more solitary existence, and perhaps it is for this reason that the pair find comfort in each other’s company and begin an innocent and heart-warming friendship.

Among the Hedges has a very quiet, slow narrative pace, and while Mesa simply writes about what happens among the hedges – conversations, snack-sharing and bird-watching – her characters are gripping, allowing the reader to become engrossed in this disquieting story. Mesa forges a strong sense of each character’s identity and life, allowing us to empathise with and understand their somewhat strange relationship.

The sense of unease readers themselves bring to the dynamic of a relationship between an old man and a young girl looms over the novel. Mesa, however, never gives into this. And in fact, by never giving into it, she confronts this very stereotype, leaving readers feeling somewhat ashamed for having even considered it, their misgivings wrong the whole time. The relationship is as innocent as any friendship could be, and Old Man, an outcast from society with a history of poor mental health, is accepted by Soon, who sees past any malicious stereotypes. Just as he takes her under his wing, helping her skip school, she takes him under hers, offering him her friendship.

Among the Hedges is an excellently written short novel, with two beautifully developed protagonists and a critical edge that confronts readers and the stereotypes and expectations they hold.