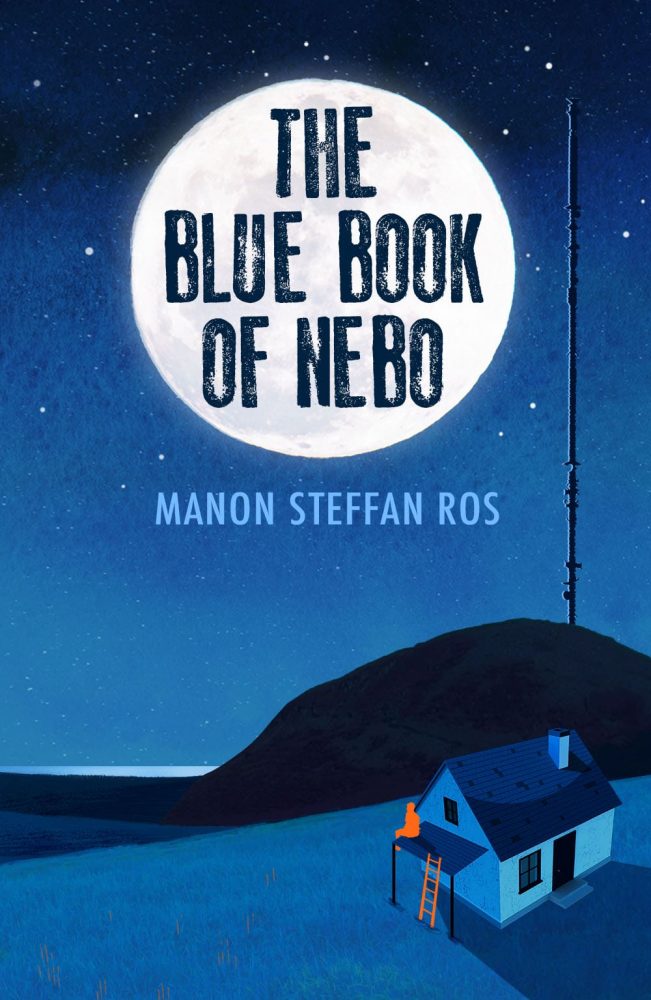 ‘And we agreed, Mam and me to share The Blue Book of Nebo. She’ll write about the olden days and The End, and I’ll write about now, about how we live. And we’ve agreed not to read what the other has written, just in case. In case of what, I’m not sure.’

Fourteen-year-old Dylan has been forced to grow up fast. He can barely remember what life was like before The End. It’s just been him, his Mam and his little sister Mona for the past eight years since the lights went out and everyone else disappeared. Life is now a matter of basic survival for Dylan – growing food for his family, hunting rabbits for meat, finding useful objects in abandoned houses, and reading everything he can get his hands on, again and again. It is through this passion for reading that Dylan reconnects with something his mother has lost almost entirely: the Welsh language.

Over alternating diary-like entries, Dylan’s Mam, Rowena, fills in the gaps about the disaster that struck their remote Welsh village, Nebo. The bond between mother and son is strong, yet there is a distance between them. As she reflects on her past, Rowena also answers the questions Dylan doesn’t dare ask her about the men who were once in her life.

The Blue Book of Nebo is a haunting YA novella that captures an eerie apocalyptic atmosphere. Life is tough and lonely, but the bond between Dylan, Rowena and Mona is fierce and brings great warmth to an otherwise bleak setting. It is also a story that pays tribute to centuries of Welsh literature, from the title for Dylan’s book – inspired by the medieval parchments The Black Book of Carmarthen and The Red Book of Hergest – to the authors he reads and commits to memory in Welsh-language books his mother grabbed from the library, even though they felt like an old enemy. Steffan Ros’s translation – or rather adaptation, as noted on the title page – of her original Welsh story offers readers a window into what it means for the characters to be Welsh-speakers in an English-language environment and the complicated emotions and experiences involved.

This YA book may look short, but the depth of the characters and their reflections, so wonderfully explored in Steffan Ros’s evocative style, are bound to linger with readers long after they read the last line.

THE BLUE BOOK OF NEBO

Translated and adapted by the author

Johanna McCalmont is a Northern Irish translator and interpreter based in Brussels where she works from French, German, Dutch, and Italian. She is a regular contributor at World Kid Lit. Read more about her work here and follow her on Twitter @jo_mccalmont.