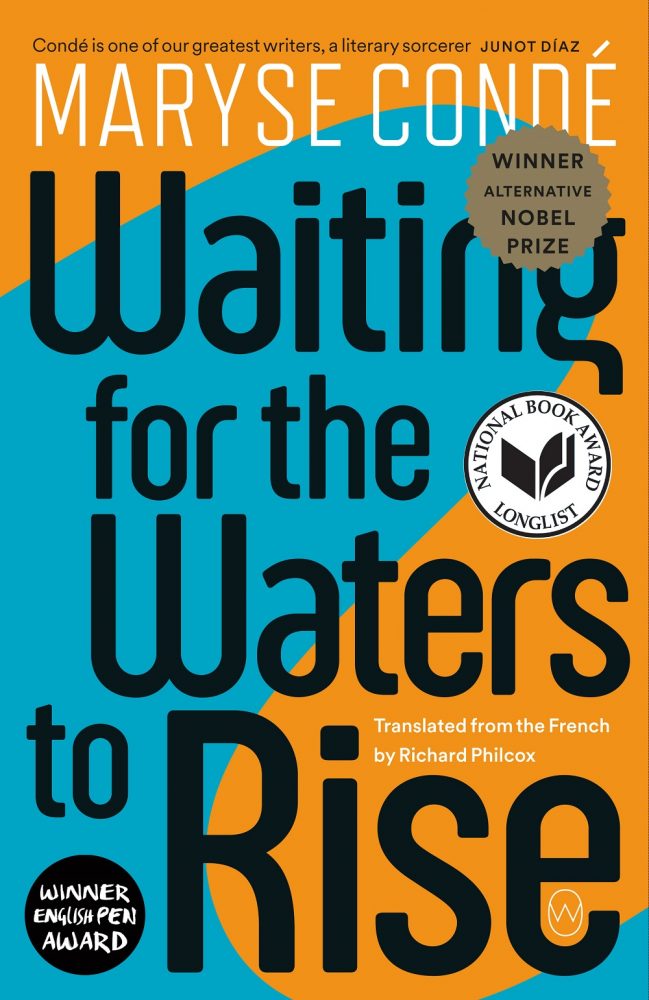 #RivetingReviews: Alice Banks reviews WAITING FOR THE WATERS TO RISE by Maryse Condé

Babakar, an obstetrician living in Guadeloupe, leads a somewhat solitary life. With no wife or children, his work takes centre stage. However, one day, this all changes. At the very start of the novel Babakar is woken one stormy night to deal with an emergency. A Haitian immigrant, Reinette Ovide, has died in childbirth, and is survived by her new-born baby. The man she was living with, Movar, is also a Haitian immigrant. He met the pregnant Reinette on the boat crossing that they shared to Guadeloupe, and from this moment on the pair stuck together. Moved by the sadness of the baby’s start to life, Babakar volunteers to take her in, and calls her Anaïs.

As the plot gets under way, we learn more about Babakar’s heritage and life story. He was born in Mali, the son of a former Malian government official who was ousted from government and made a teacher in a remote area. Here, his father met Babakar’s mother, a young Guadeloupean who had been sent to Mali to teach. Although Babakar’s mother has now died, we see a lot of her in the book as she often comes to visit her son in his sleep. This blue-eyed, mysterious woman (who, in Mali, was often labelled a witch) offers Babakar advice in his dreams. After learning about his parents, we read of Babakar’s life in Montreal, where he received a scholarship to study. Here, he meets Hassan, a man from a fictious war-torn country neighbouring Mali. The pair return to this country together, and Babakar’s life is far from stable during these years. One day, his mother comes to him in his sleep to tell him to move to her homeland of Guadeloupe.

We then return to Guadeloupe, where these tales of Babakar’s past are interrupted by a visit from Movar. Flustered, he tells Babakar that Reinette had a premonition about her death and made Movar promise that he would take her child back to her family in Haiti. The two men decide to leave for Haiti to fulfil Reinette’s wish. In Haiti, we learn more of Movar and Reinette’s stories, and we also meet Fouad, a Palestinian whose story is inevitably grim. As the years slowly pass in Haiti and Babakar and Movar continue to search for Anaïs’s relatives – something that proves a complicated task – we hear of the violence, corruption, and natural disasters by which the country is assailed.

Waiting for the Waters to Rise is a powerful and moving novel about lineage, heritage, roots, and what we “inherit” from our families – be this good or bad. It is also very much a story about conflict and corruption, with each of the countries that feature in the book being places that were and still are terrorised by war, colonisation and corrupt political systems.

Waiting for the Waters to Rise is most certainly a complex novel, with Condé intertwining the main plot of finding Anaïs’s family with the background stories of various central characters. These “side stories”, however, flow effortlessly into the main narrative, thanks to Condé’s storytelling mastery. Waiting for the Waters to Rise is compelling, and at times devastating, as Condé traverses multiple countries with histories of political violence and colonialism. This tale of family and heritage is a fantastic read that will take you on a journey through the lives of a fascinating cast of characters.

WAITING FOR THE WATERS TO RISE

Translated from French by Richard Philcox